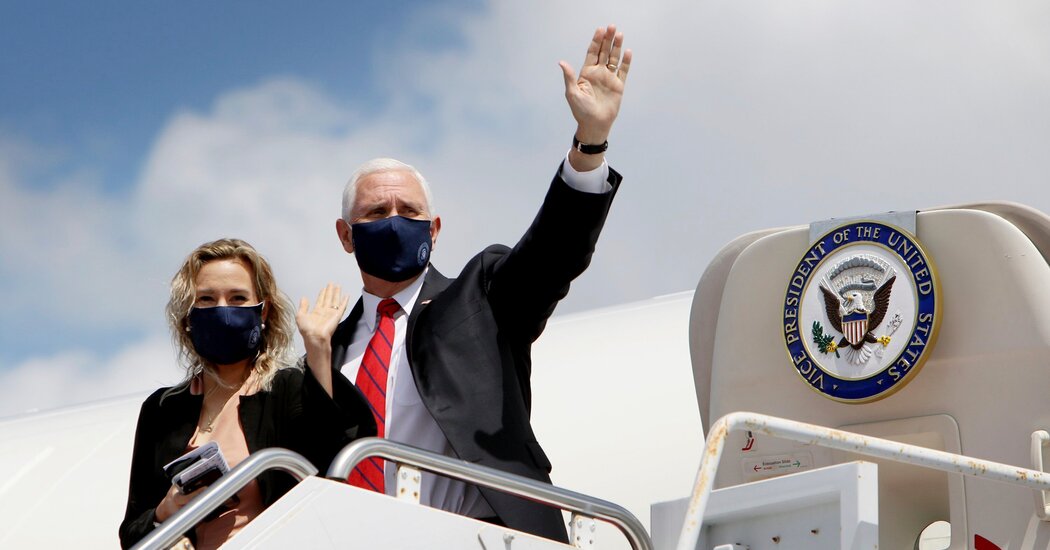 Before he landed back in Washington after a day trip to Florida, Mr. Pence and the Trump campaign had already scheduled a political event for the vice president in Wisconsin on Aug. 19, according to two administration officials, an attempt to fill a void they thought Mr. Biden was leaving in the battleground state.

The decision to fly Mr. Pence to Wisconsin during the Democratic National Convention in Milwaukee, simply because Mr. Biden decided he should not go, underscored the different political wagers the two campaigns are making.

Trailing by a wide margin in the polls in Wisconsin, the Trump campaign is assuming there is more to be gained politically by showing up, speaking in front of a small crowd and getting coverage from local television stations and newspapers. Mr. Biden, by contrast, has chosen to stay away and portray it as the responsible choice in the face of a public health crisis and the recommendations of health officials discouraging travel in the state.

A spokesman for Mr. Biden, T.J. Ducklo, called Mr. Pence’s planned trip to Wisconsin “disgraceful,” adding: “It’s the perfect analogy for how under his and President Trump’s leadership, this White House consistently puts their own political interests above the health and safety of the American people.”

In Wisconsin, aides to Mr. Pence also saw an opportunity to troll their opponent for the past mistakes of his party. “You would think that for a party that didn’t show up four years ago, they’d learn from their lessons and just show up,” Devin O’Malley, press secretary for Mr. Pence, said of Mr. Biden’s decision to call off his trip to Milwaukee.

Trump campaign officials noted that the last time a Democratic presidential nominee set foot in the state was Nov. 5, 2012, when President Barack Obama gave a speech in Madison. They expressed surprise that Mr. Biden would not simply deliver a speech in Milwaukee at a television studio, for the sake of being able to say he visited, and said they were going to add more events in the state to capitalize on the canceled Democratic convention.

Four years ago, Mr. Trump won Wisconsin by less than 23,000 votes. Since then, the state has taken on outsize symbolic importance for Democrats as one of the unforced errors of the 2016 campaign cycle, when Hillary Clinton, the former Democratic nominee, did not visit the state. In her memoir, “What Happened,” Mrs. Clinton admitted that Wisconsin was the “one place where we were caught by surprise,” but disputed the Monday-morning quarterbacking that blamed the loss on the fact that she didn’t campaign there.

Mr. Biden has led Mr. Trump in most polls of the state. And Democrats in Wisconsin said they saw no evidence on the ground that voters wanted the convention to go on, or Mr. Biden to visit, with the number of positive cases still rising.

“As we make calls, people are thanking us for not coming out and knocking on their doors,” said Matt Moreno, chairman of the Waukesha County Democratic Party. “We are listening to the scientists.”

He said that drawing parallels to 2016 was “a great sound bite, but I don’t see anything on the ground to reflect what they’re saying.”

Democratic strategists said that the advantage the party was hoping to get by holding its convention in Milwaukee had already been lost, and that the further downside of canceling Mr. Biden’s speech was negligible. “The greatest value of a convention is to bring in large numbers of volunteers from around the state who then become enmeshed in the fall campaign,” said David Axelrod, a former senior adviser to Mr. Obama. “Even before Biden’s decision, that advantage has been reduced by the scaled down nature of the event.”

The Biden campaign has tried to virtually campaign in Wisconsin without holding physical events there. Mr. Biden has held online rallies and round tables targeting Milwaukee and other parts of the state, and has sat for six interviews with local television stations in Milwaukee and Green Bay since April. The campaign also has 12 senior staff members working in Wisconsin.