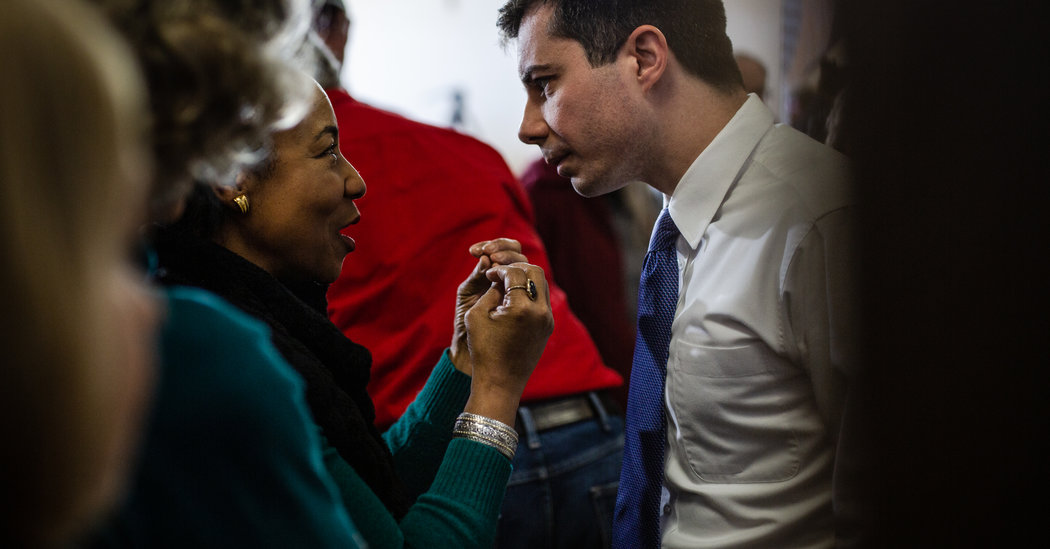 BURLINGTON, Iowa — With less than two weeks to go, Pete Buttigieg has a strategy to make up lost ground before the Iowa caucuses, one with echoes of the last Democratic president who carried the state by campaigning everywhere with a promise to mend divisions.

“Now is the season for us to bring hope back into style,” Mr. Buttigieg said in Orange City. He laid down variations of the line at stop after stop: “I’m asking you to summon the sense of hope,” he said in tiny Harlan.

In Council Bluffs, Mr. Buttigieg, the now-38-year-old former mayor of South Bend, Ind., made the Barack Obama subtext overt. “The same state that took a chance on a young guy with a funny name, who a lot of folks didn’t think could win 12 years ago,” he said, “this state could help us make history one more time.”

Rather than turning off voters with its presumption, the line brought down the house, even as many in the crowd — like all Iowa Democratic crowds these days — said they were still undecided ahead of the Feb. 3 caucuses.

With three of Mr. Buttigieg’s top rivals pinned down at the Senate impeachment trial, and a nasty skirmish between Senator Bernie Sanders and former Vice President Joseph R. Biden Jr. over Social Security grabbing headlines, Mr. Buttigieg has seized the opportunity to camp out in Iowa, largely below the radar, exuding the nonaggressive vibe he embraced at the recent Democratic debate in Des Moines. His most visible appearance before the caucuses may be a town-hall-style event on Fox News planned for Jan. 26.

“When my party has won the White House in the last 50 years,” he said, “it’s always been somebody who’s from outside Washington, offering the message around our values and calling for a new generation of leadership.”

There is some evidence his discipline in not attacking his Democratic opponents — or even President Trump — may be paying dividends.

Charnell Sanders, who collected a Buttigieg yard sign at his rally in Pella on Monday, said she had voted for Mr. Trump, but now regretted it and planned to caucus for Mr. Buttigieg. Her husband remains a Trump supporter, and she does not want strife over the president in her marriage. “I like that Pete doesn’t attack President Trump so much as the other candidates do,” said Ms. Sanders, a clerk at a college.

While Mr. Sanders and Senator Elizabeth Warren scrabble for the progressive Democratic base, Mr. Buttigieg is showing up mainly in counties that voted for Mr. Obama before flipping to Mr. Trump. A two-day, seven-stop itinerary this week through southeast Iowa took him to multiple Obama-Trump counties with Representative Dave Loebsack, the congressman who represents the region and has endorsed Mr. Buttigieg.

In Burlington, Mr. Loebsack lamented that “this country has become so divided, so tribal” and praised Mr. Buttigieg as someone able to “reach out and talk to folks who don’t just agree with you, but who disagree with you.”

Mr. Loebsack recalled in an interview that he had supported Howard Dean in the 2004 primary, when a personal feud between Mr. Dean and Richard A. Gephardt in the weeks before the caucuses destroyed both candidates. “That was a terrible way to go,” he said.

Ann Fields, the Democratic chairwoman of Marion County, who has not publicly endorsed a candidate, had earlier favored Ms. Warren but turned away because “she’s divisive,” she said. “I don’t think we need a divisive person right now. I think we need somebody like a Buttigieg or an Amy Klobuchar.”

The latest state poll by The Des Moines Register and CNN, in mid-January, showed a reversal of Mr. Buttigieg’s surge last fall. From November to this month, he fell back nine percentage points, the largest drop of any of the top four candidates, who remained tightly bunched.

A strand of conventional wisdom is that Mr. Buttigieg peaked too soon. Given the large role that grass-roots organizing plays in the caucuses, however, that may be overly glib.

Large numbers of Iowans traditionally break for a candidate in the last week; this year, with four candidates knotted up at the top, many voters are not expected to decide until caucus night. The Buttigieg campaign’s ground game is designed to present undecided caucusgoers who enter their precincts with tightly knit cells of Buttigieg supporters. The campaign’s national caucus director, Travis Brock, has toured the state training more than 1,000 people to assume leadership roles in their precincts.

“We know there’s going to be a sizable portion of people who walk in undecided on caucus night, and they’re going to want to see a well-organized, enthusiastic group who can persuade you,” said Brendan McPhillips, the campaign’s Iowa director.

Josh Heard, a Buttigieg caucus precinct leader, said canvassing his neighborhood in Council Bluffs was like herding cats. “A lot of them will say, ‘I support Pete,’ and I’ll come back around the next time and there’ll be a Biden sign in their yard,” he said.

The former vice president has a commanding lead among black voters nationally, especially older voters, but if Mr. Biden falters — including if the impeachment trial renews scrutiny of his conduct in Ukraine and harms his standing — black voters will seek an alternative, the Buttigieg campaign believes.

At a forum in Des Moines on Monday aimed at voters of color, Mr. Buttigieg was pressed about a new wrinkle in his management of the police in South Bend, which has roiled his candidacy since the summer. He was asked about a report that black officers had unsuccessfully sought a meeting with him to air grievances.

“I’ve had countless meetings with officers, including officers of color,” Mr. Buttigieg replied, noting that some of those reaching out faced accusations of misconduct or were threatening lawsuits. “When someone threatens to sue you, you make sure they’re talking to a lawyer,” he said.

Representative Anthony G. Brown of Maryland, a member of the Congressional Black Caucus who endorsed Mr. Buttigieg on Jan. 9, campaigned with him for the first time last week in western Iowa, where he rebutted a narrative promoted by some Buttigieg critics that black residents of South Bend did not prosper under his leadership. “He’s worked with a coalition of people,” Mr. Brown said on the stump in Harlan. “Look at what they’ve done in South Bend.”

As he spoke, followed by the candidate, three friends — Jerry Rosman, Dianna Springman and Neil Ferguson — looked on, in a building that featured the “National Corn Empire Discovery Center.”

Ms. Springman, a retired bank regulator, said she supported Mr. Biden but was interested in Mr. Buttigieg “for the future.”

Mr. Rosman, a farmer, said that his preferred candidate was Ms. Klobuchar but that Mr. Buttigieg could be a second choice — an important factor if Ms. Klobuchar does not gain a threshold of support in her caucus and voters must pick another candidate. “He kind of reminds me of the last president we had, almost,” he said, in a nod to Mr. Obama.

Mr. Ferguson, an Air Force veteran, said Mr. Buttigieg was one of his final few choices — “but Donald Trump is on that list, too,” he added.

Mr. Ferguson, who drives a school bus, said he liked how Mr. Trump had handled the economy as well as his order to kill a top Iranian general. “As vulgar as he might sound at times, and as coarse and undiplomatic,” he said, “my life continues to improve. So what do I have to complain about?” He illustrated the limits of Mr. Buttigieg’s appeal to wavering supporters of the president.

As Mr. Buttigieg spoke, people applauded lines that gently swiped at Mr. Trump. Patriotism, he said, “isn’t about chest thumping or throwing military parades for the president.” The crowd loved it. Mr. Ferguson, the commander of the local American Legion post, kept his hands pinned at his side.