In the compressed and crucial weeks between the New Hampshire primary and Super Tuesday, Pete Buttigieg is moving aggressively to replenish his campaign coffers with an ambitious schedule of 10 fund-raisers held across six states in a 14-day period.

The money chase for Mr. Buttigieg began in Indianapolis on Thursday at the 16,000-square foot home of a supporter as donors noshed on egg salad and cucumber sandwiches — “What a thrill to be back home again in Indiana,” Mr. Buttigieg said — and continued on Friday in California, as he traveled from San Francisco to Silicon Valley to the state capital of Sacramento for a photo line with contributors.

He will soon visit Seattle, Salt Lake City, Los Angeles, the Washington D.C. area, Miami and Palm Beach — with most of the events built around states that will vote in early March. 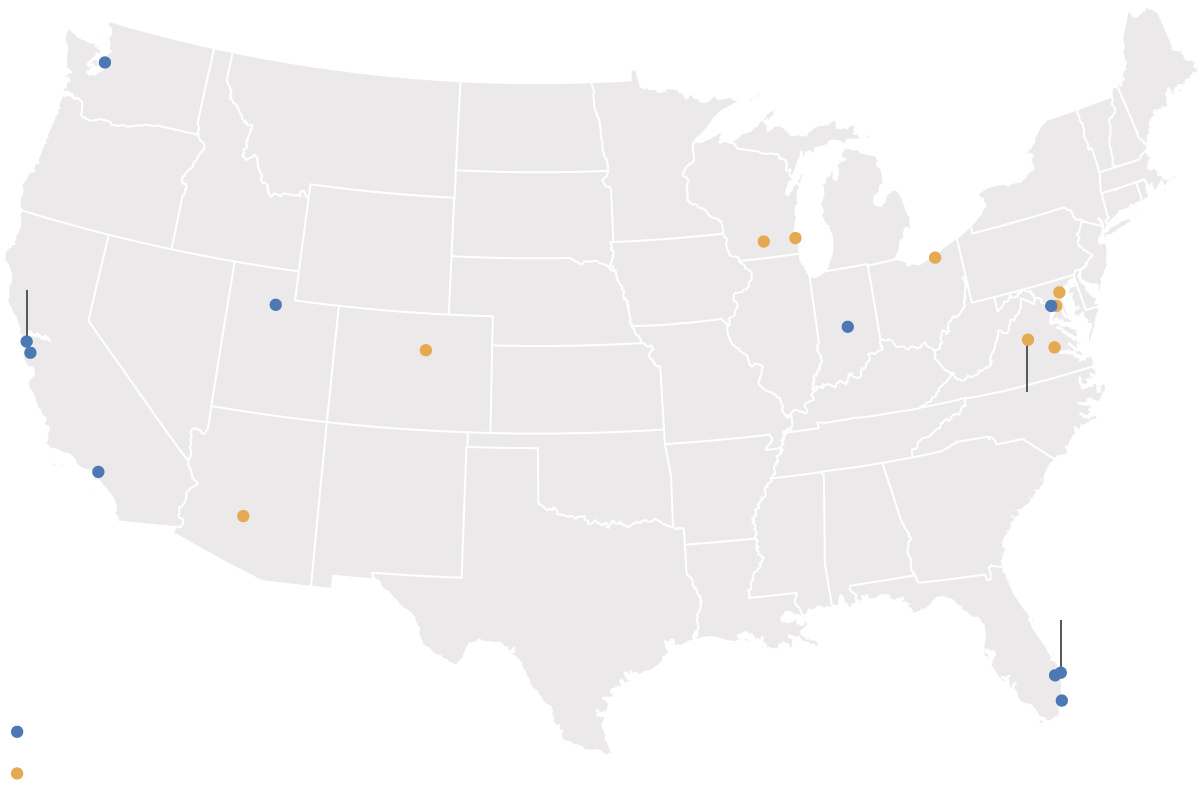 Attended by his husband or staff 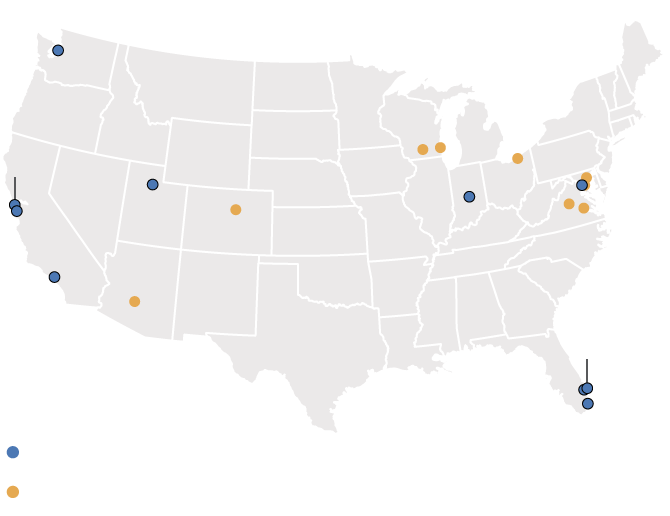 Attended by his husband or staff

In addition to Mr. Buttigieg himself, his national policy director, Sonal Shah, a veteran of the Obama administration and Goldman Sachs, is hitting the road to headline events in Virginia, Maryland and Ohio, where donors are asked for up to $2,800 to become a “champion” and join in a “policy conversation” (some tickets can be had for as little as $54). And Mr. Buttigieg’s husband, Chasten, is featured at another five events, with two stops in Wisconsin, two in Denver and one in Phoenix.

The frenetic fund-raising pace opens up Mr. Buttigieg to potential criticism from progressives that he is the preferred candidate of the wealthy. That is a line of attack that both Senator Bernie Sanders of Vermont (“I don’t have 40 billionaires, Pete”) and Senator Elizabeth Warren of Massachusetts (“The mayor just recently had a fund-raiser that was held in a wine cave full of crystals”) have relished in recent months.

A virtually unknown small-town mayor a year ago, Mr. Buttigieg built a sizable list of small online donors and a formidable big bundler operation in 2019.

The need for money is acute as the candidates enter one of the most intense phases of the primary with consequential contests on each of the next two Saturdays, in Nevada and South Carolina. The latter state will be followed almost immediately by 15 states and territories on the next Tuesday, including the big prizes of California and Texas, where the cost of advertising can be prohibitive.

With the most delegates after the first two contests, Mr. Buttigieg, who ended two terms as mayor of South Bend, Ind., last month, now faces one rival in Michael R. Bloomberg, the billionaire former New York City mayor, who has almost limitless money, and another in Mr. Sanders whose army of small contributors have been giving in accelerating amounts. Tom Steyer, a hedge fund billionaire from California, has been spending heavily, and rising in the polls, in Nevada and South Carolina.

Mr. Buttigieg had entered 2020 with $14.5 million in the bank. But his pace of spending since then burned through much of that sum and some of his money is earmarked for the general election and cannot be spent in the primary.

His monthly payroll had climbed to $2.7 million by December, federal filings showed. He spent $2.5 million on Facebook and Google ads since Jan. 1, company records show. And Mr. Buttigieg invested $6.5 million in television ads from Jan 1. through the New Hampshire primary this past Tuesday, according to Advertising Analytics, a media tracking firm. Plus, there are the other costs to run for president that are only growing — chartered planes, renting event space, polling, consulting fees and more. His campaign reported a single $761,039 credit card payment in December, for instance.

In the final quarter, Mr. Buttigieg raised $24.7 million, though he spent far more than that during the three-month period, about $34 million. Other candidates, including Mr. Sanders and Ms. Warren, similarly spent more than they raised as the primaries neared.

His advisers have previously told donors that they were investing almost everything in Iowa, where he earned the most state delegate equivalents, and New Hampshire, where he finished a strong second, in hopes that command performances in those two states would open up political and financial opportunities beyond.

“All the chips were on the table for Iowa,” said David Jacobson, a Buttigieg fund-raiser and former ambassador.

But the impact of Mr. Buttigieg’s apparent win in Iowa was dampened by the delayed and muddled results that are still subject to a recanvass. His campaign announced he had raised $4 million in the four days afterward. That is a significant sum but still less than what rival strategists said might have otherwise been expected for winning the opening contest.

Mr. Sanders was raising money at a clip of well above $1 million per day online in early February, according to an estimate based on figures released by his campaign. And that was before he won the New Hampshire primary. Ms. Warren’s campaign told supporters this week she had raised $5 million in the nine days following the Iowa caucuses. Neither senator is accepting contributions from elite donors.

One of Mr. Buttigieg’s events will be on Feb. 23 at the home of Representative Don Beyer, a Virginia Democrat and the first member of Congress to endorse him, with five other congressional co-hosts. Three days later, he will hold three fund-raisers across Florida — which does not hold its primary until March 17 — including one in Palm Beach whose hosts include Cynthia Friedman, a longtime Democratic contributor.

The campaign had sent invitations to even more events, including in Atlanta and Charlotte, N.C., on Feb. 27 — the $500 level ticket is listed as sold out online for the Atlanta gathering — but Buttigieg aides said those events have been canceled.

Mr. Buttigieg is not alone on the fund-raising circuit. Former Vice President Joseph R. Biden Jr. organized a conference call with his national finance committee after his fifth place New Hampshire finish to reassure skittish donors. He has upcoming fund-raisers in Colorado, Nevada and South Carolina, the latter two in states that vote later this month.

On Thursday, Mr. Biden held two events in New York that drew a notable group of Wall Street contributors. Organizers said the events raised almost $800,000, a large haul for a candidate who had sagged to fourth and fifth place in the first two contests. Mr. Biden also said on “The View” this week that he was raising about $400,000 per day in online donations.

That same evening, Michael Halle, a top strategist for Mr. Buttigieg, was in Washington meeting with donors, with contribution levels up to $1,000 (other Buttigieg advisers, including Lis Smith and Michael Schmuhl have previously headlined fund-raisers).

Both Mr. Biden and Mr. Buttigieg have been assisted by super PACs, which are legally barred from coordinating strategy with the campaigns. Mr. Halle drew some criticism for a post on Twitter two days after the Iowa caucuses all-but-directing where such support could best be used.

The Buttigieg campaign announced expanding its Super Tuesday operations on Thursday, saying it would have “boots on the ground” in each of the states as of next Monday. That is far later than Ms. Warren and Mr. Sanders, who ramped up operations in 2019.

Not all of Mr. Buttigieg’s staff in Iowa and New Hampshire are keeping their jobs. The campaign said it was following the terms of the union contract.

“When positions in Iowa ended after the caucuses, we’ve been offering new positions as they become available as directed by the collective bargaining agreement,” said Chris Meagher, Mr. Buttigieg’s spokesman. “We’re glad to have already offered the vast majority of them new positions on our team.”