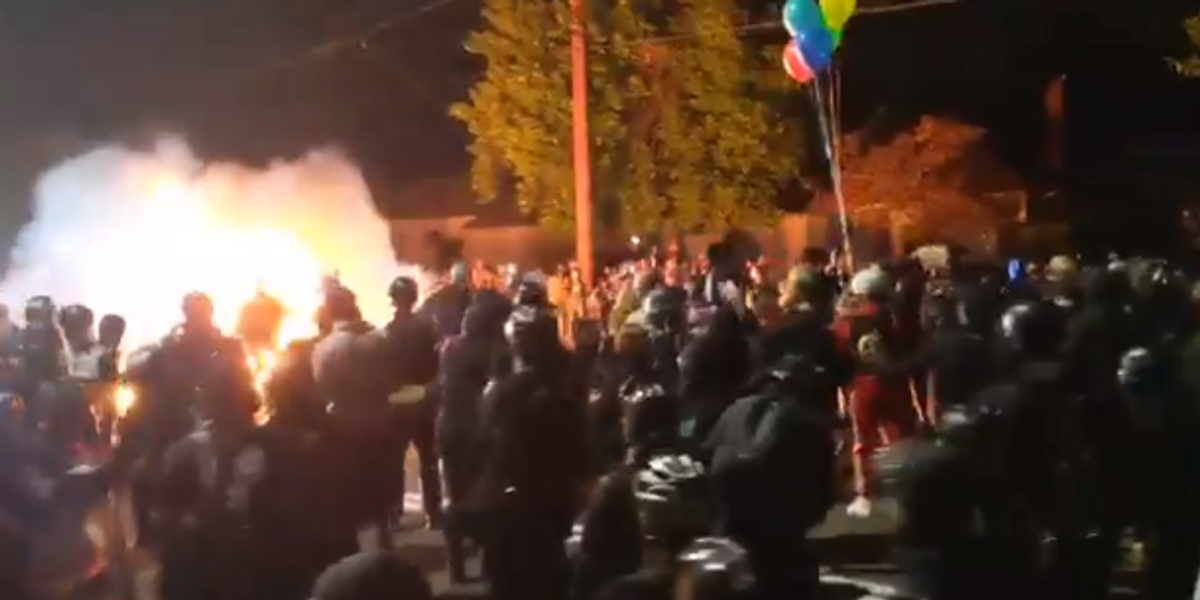 Saturday marked the 100th consecutive day of protests in Portland, but things escalated into violence, and police declared a riot after agitators threw Molotov cocktails and launched fireworks at law enforcement officers.

Hundreds of people gathered at Ventura Park in southeast Portland on around 7 p.m. on Saturday, including many dressed in all black clothing. Some of them donned helmets, gas masks, body armor, and a few were equipped with large shields.

Around 9 p.m., the crowd marched towards the east precinct, but Portland police stopped the procession. Police said the rioters then engaged in “tumultuous and violent conduct.”

Earliest I’ve ever seen it declared a riot. Teargas and fireworks already in full force, and this was just shortly… https://t.co/PvvXFSkqOA

At about 9:15 p.m., rioters began throwing fire bombs, shooting illegal fireworks, mortars, and hurling rocks at police officers. One rioter had a “wrist-rocket” type of slingshot. A Portland police sergeant was “struck by a commercial grade firework, which burned through his glove and injured his hand,” according to the Portland Police Bureau. Portland police responded with crowd control munitions, including tear gas and impact weapons.

It’s like a war zone in the residential area of SE Portland where antifa are rioting tonight. #PortlandRiots https://t.co/UkgoL4pRPB

One of the Molotov cocktails landed in front of the officers and ignited a large fire. A protester caught on fire from the inferno and frantically attempted to put out the flame by running around the street. Police say the Portland fire and rescue medics offered treatment to the man who caught on fire. “The injured person was later taken to a hospital by private vehicle,” authorities said.

Fire bombs were thrown at officers, injuring at least one community member. Police are trying to restore peace and… https://t.co/KDQTqEfmWE

Graphic: #Antifa rioters throw a Molotov cocktail in direction of police in SE Portland. It lands next to people, s… https://t.co/mwLezqtskw

The state troopers will work alongside Portland police as well as “protect and defend federal government buildings and personnel during a civil disturbance” when necessary, Kevin Sonoff, a spokesman for the U.S. Attorney’s Office, said.

That means that an Oregon state police trooper can arrest someone for a federal crime and then turn the case over to a federal prosecutor instead of a state prosecutor.

This is a significant development since Multnomah County District Attorney Mike Shmidt announced last month that his office would not prosecute certain crimes during the ongoing protests. Included in those crimes that his office refused to prosecute is interfering with a peace officer or parole and probation officer, disorderly conduct in the second degree, criminal trespass in the first and second degree, escape in the third degree, harassment, and riot (unless accompanied by a charge outside of this list).

Oregon State Troopers are also out for the face-offs on Night 100 of the Portland Protests #Portland #PortlandRiots… https://t.co/BkEKpzzWjT

Rioters lit dumpsters, garbage cans, and wooden pallets on fire in the streets. Portland police said that over 50 people were arrested during Saturday’s civil unrest.

Police sprint in and make arrests of antifa rioters on the street in SE Portland. #PortlandRiots https://t.co/rEj8TbD1RW

A crowd of about 200 held a vigil for Danielson on Saturday near Portland, where Patriot Prayer leader Joey Gibson called for members not to seek revenge for Danielson’s death.

The speaker tells the group not to commit any acts of violence going forward @fox12oregon https://t.co/VhXHSZct4n