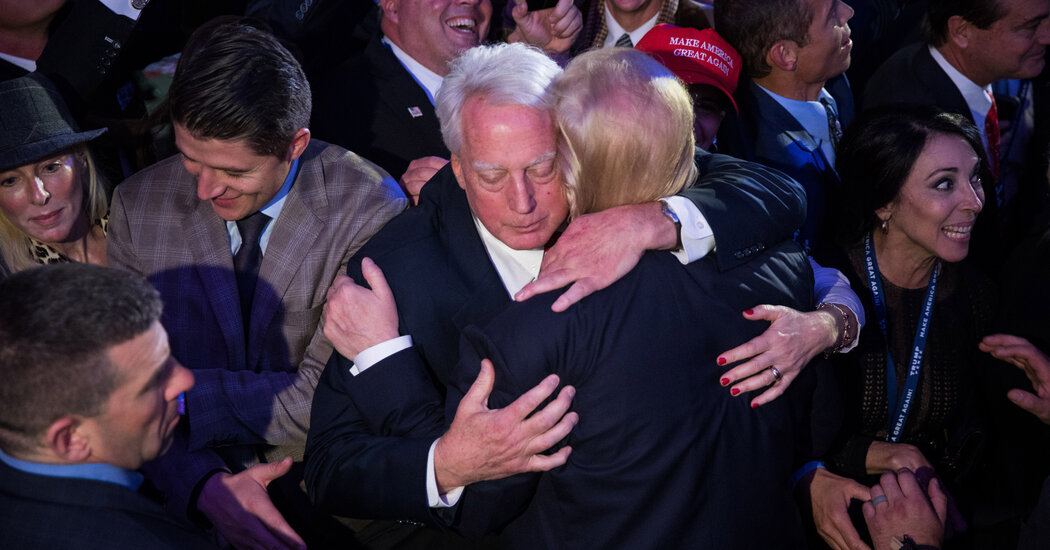 Robert Trump, 72, two years younger than the president, has been ailing for months and is said to be gravely ill. He was also hospitalized in June.

“I have a wonderful brother,” the president said Friday during a news conference at the White House. “We’ve had a great relationship for a long time, from Day 1, a long time ago, and he’s in the hospital right now, and hopefully he’ll be all right.” But the president added that Robert Trump was “having a hard time.”

Kayleigh McEnany, the White House press secretary, added in an email that “Robert is very special” to the president. She did not say why Robert Trump was in the hospital.

Upon landing in New York City, Mr. Trump posted on Twitter that he was there to visit his brother, but he added a plug for his re-election campaign by attaching a photograph of the front page of The New York Post that featured an interview he gave to the newspaper. “We’re going for New York on November 3rd,” the president tweeted. He was at the hospital for just under an hour.

As the youngest son in the strict household of Fred C. Trump, Robert Trump was shielded from some of the pressure exerted by his disciplinarian father over his older brothers. In “The Art of the Deal,” Donald Trump writes of stealing his younger brother’s blocks and gluing them together. “That was the end of Robert’s blocks,” he writes, proudly.

Even though Robert Trump was never groomed to take over the family company, he loyally went to work for it after his father handed the reins to Donald Trump. Robert Trump served as an executive vice president of the Trump Organization, and he helped oversee its casinos in Atlantic City, N.J.

Trump Organization employees referred to Robert Trump as the “nice Trump,” according to Gwenda Blair, a Trump family biographer. But after a blowout fight in 1990 with his older brother after the opening of the Taj Mahal casino, he stopped reporting directly to Donald Trump.

“Donald pointed the finger at Robert,” Ms. Blair said. “When the opening weekend was botched and the slot machines got jammed up, he blamed Robert for that. Robert stormed out and never worked for him again directly.”

After that, Robert Trump was sidelined in the company. “You could consider him the quietest of Trumps,” said Michael D’Antonio, a Trump biographer. “He was glad to stay out of the spotlight. He had a very low-key role in the Trump Organization itself. I could never tell quite what he did, but it was not public-facing.”

But Robert Trump remained loyal to his family, serving as its unofficial spokesman and consigliere.

He has in recent months led the family in its unsuccessful bid to block the publication of a memoir by their niece Mary L. Trump — the daughter of their deceased older brother, Fred Trump Jr. — that described decades of family dysfunction and brutality that she claimed turned Donald Trump into a reckless leader. It was the president’s younger brother who requested the restraining order in a filing in Queens County Surrogate’s Court.

Before that, Robert Trump was the one who spearheaded the family response in 1999 when Mary Trump and her brother, Fred Trump III, sued for their father’s share of the family estate.

Robert Trump was already ill when he helped the president in the more recent lawsuit. “It seemed Robert was being dragged out of a sickbed to somehow contest this,” Mr. D’Antonio said. “He was willing to be used by Donald, but never eager to be out front.”

Robert Trump, who for years was married to Blaine Trump, a New York City socialite, was more accepted in society circles than Donald Trump ever was, Mr. D’Antonio said. But he always toed the family line that the Trumps were devoted to one another.

The president’s decision to visit Robert Trump in the hospital is different from how he handled news in 1981 that his older brother, Fred Trump Jr., was in grave shape. According to Mary Trump’s account, Donald Trump went to the movies the night Fred Trump Jr. died.

But Ms. Blair said that in light of the crack that Mary Trump’s memoir has put in the Trump family lore, the president would have had no choice.

“It’s very much part of the Trump family legend that they are a tight-knit, loyal group,” she said. “That is the family modus operandi. Mary Trump has recently suggested otherwise, but I think as part of the response to that, Donald Trump would have no choice but to go.”