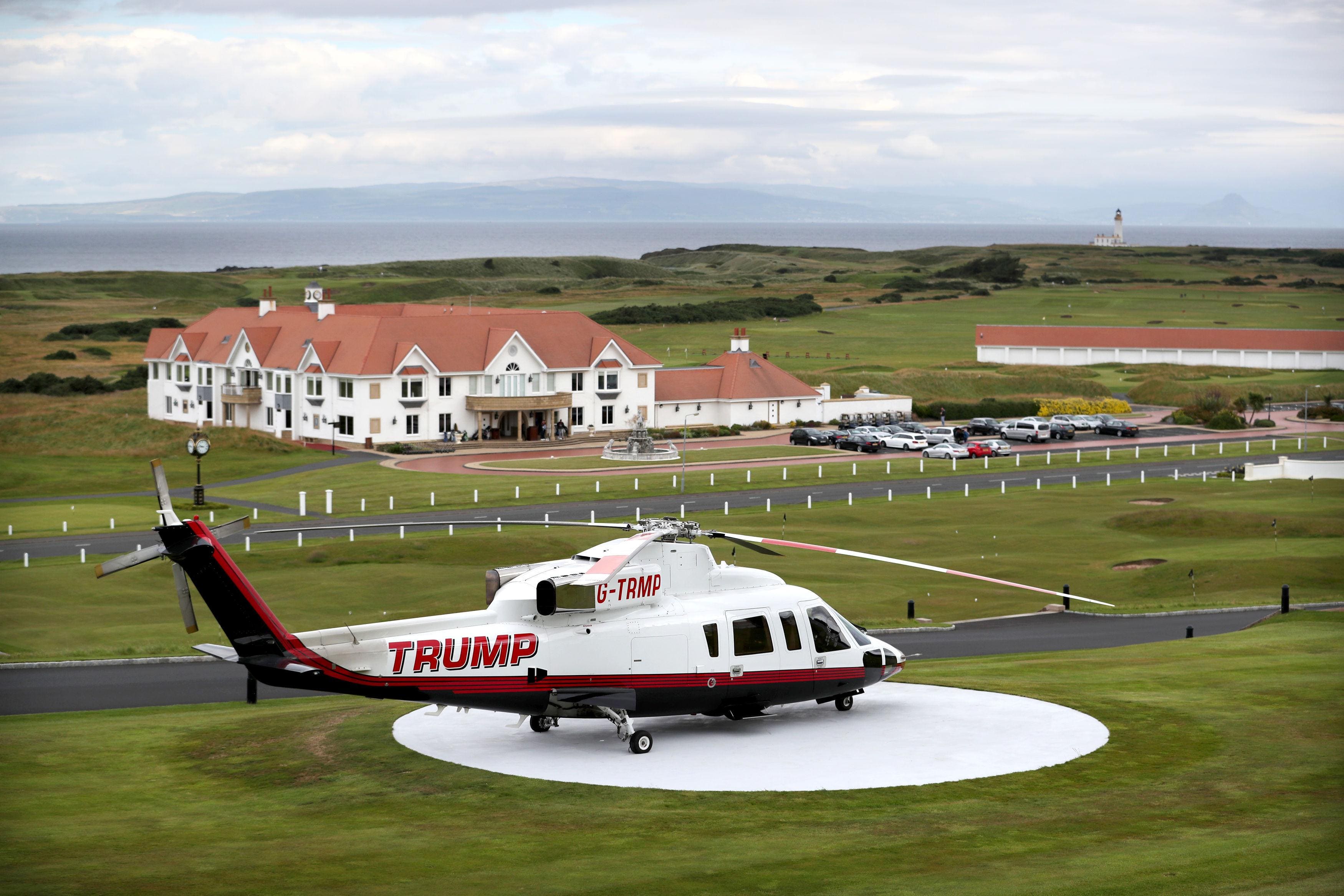 President Donald J. Trump has long been a high-profile user of private jets and helicopters. Records show he currently owns a Boeing 757, frequently spotted during the campaign that saw him win the Oval Office, a Cessna Citation X, and three Sikorsky S76-B helicopters. Of the rotorcraft, one is currently for sale.

The listing on Avbuyer reads, “Call for price. Make an offer.”

The agent listed in the ad, Emmanuel Dupuy, declined to comment except to say the information is accurate.

What will you get?

The helicopter manufactured in 1989 has 6,259.3 flight hours on 19,159 cycles. There’s a six-place executive cabin interior with paneling and a soundproofing system.

A floor to ceiling credenza unit is covered with African mahogany and includes storage drawers for ice and refreshments. There’s also a central zone drinks cabinet with three decanters and Airshow display.

The floor features custom carpeting. Seats are upholstered ecru and almond colored leather, each with “gold” seatbelt fittings. We assume gold-plated. There’s a magazine rack that may once have carried copies of Trump magazine. Twitter users will note there is no WiFi. 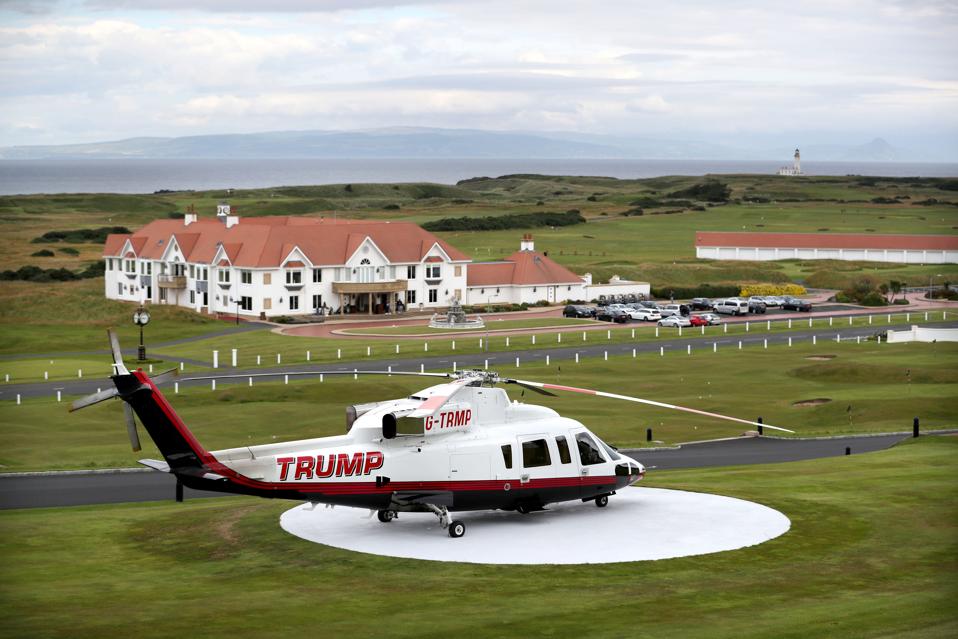 The Trump helicopter at Trump Turnberry in Ayrshire. (Photo by Jane Barlow/PA Images via Getty … [+] Images)

It’s hard to say what how much tail number N-76DT will sell for. One industry executive said the COVID-19 pandemic had pushed down the price of helicopters.

Titans of business no longer are commuting from their backyards in Greenwich or the Hamptons to offices on Wall Street. On the West Coast, Hollywood moguls don’t need to chopper in from Malibu to the studio lot.

Likewise, Trump’s 1997 Citation X, which doesn’t appear to be on the market, is unlikely to fetch much. Business Jet Traveler lists the price for the type when new – it ended production in 2012 – was $23 million. The current for sale listings in Controller range from $2.15 million to $3.65 million. Globeair says the average price is $2.57 million. 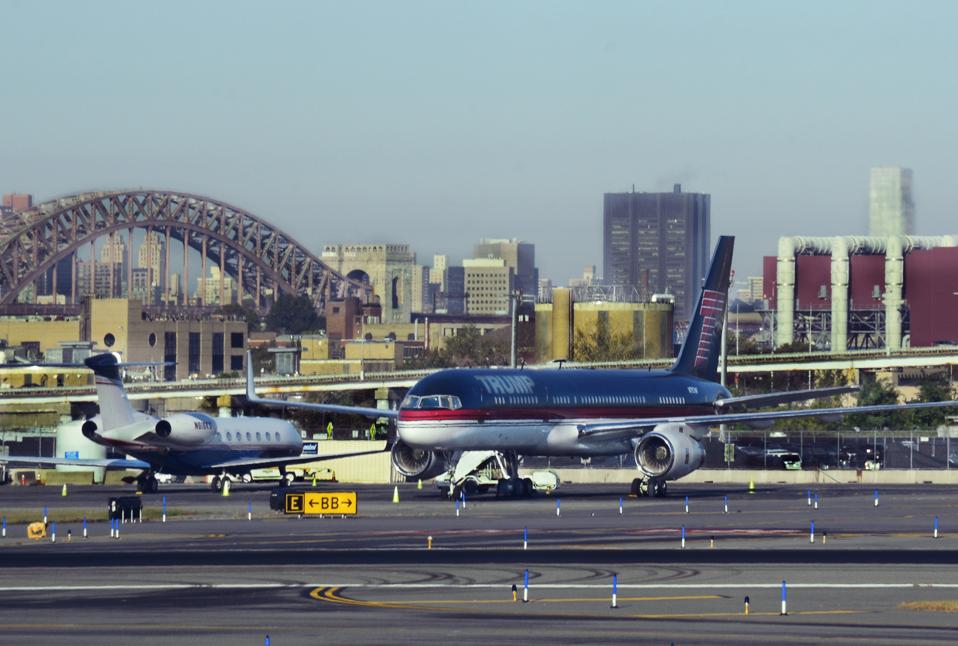 The most valuable asset in the Air Trump fleet is his Boeing 757-200, which the late Paul Allen converted from airline use to a private jet interior.

Greg Raiff, the CEO of Private Jet Services, a charter broker specializing in sports team, live entertainment, and corporate shuttle flight flights, says while the hull and engines are only worth around $5 million, to replicate the interior would cost as much as $25 million.

He adds the pandemic has boosted demand for converted airliners as more UHNW families use private aviation to move between homes.

“A G650 or Global Express just doesn’t have enough space for extended families, nannies, support staff, and all sorts of luggage when you are going from one house to another for two months instead of two weeks,” he says.

While the market of buyers for such aircraft is thin, he says, demand for airliner-size private jets on charter market is increasing. Perhaps if you wrote a book titled, “The Art of the Deal,” it’s something to consider.