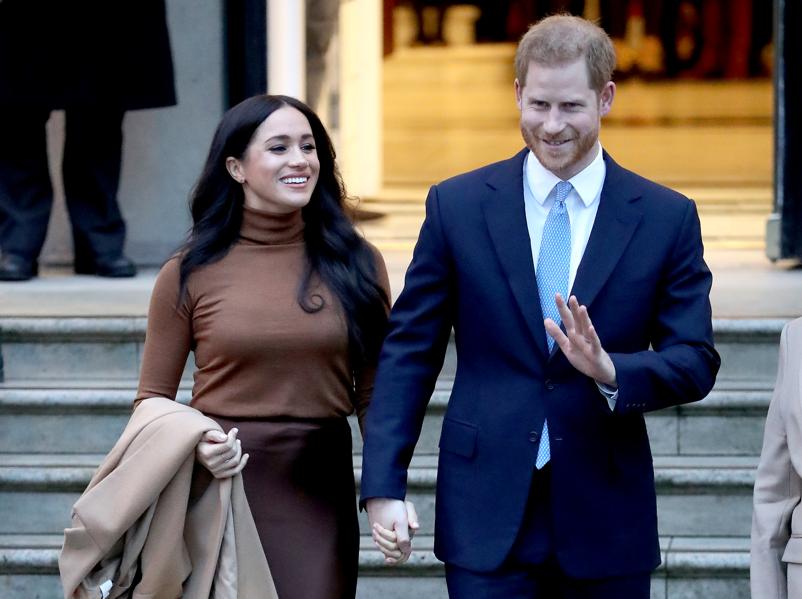 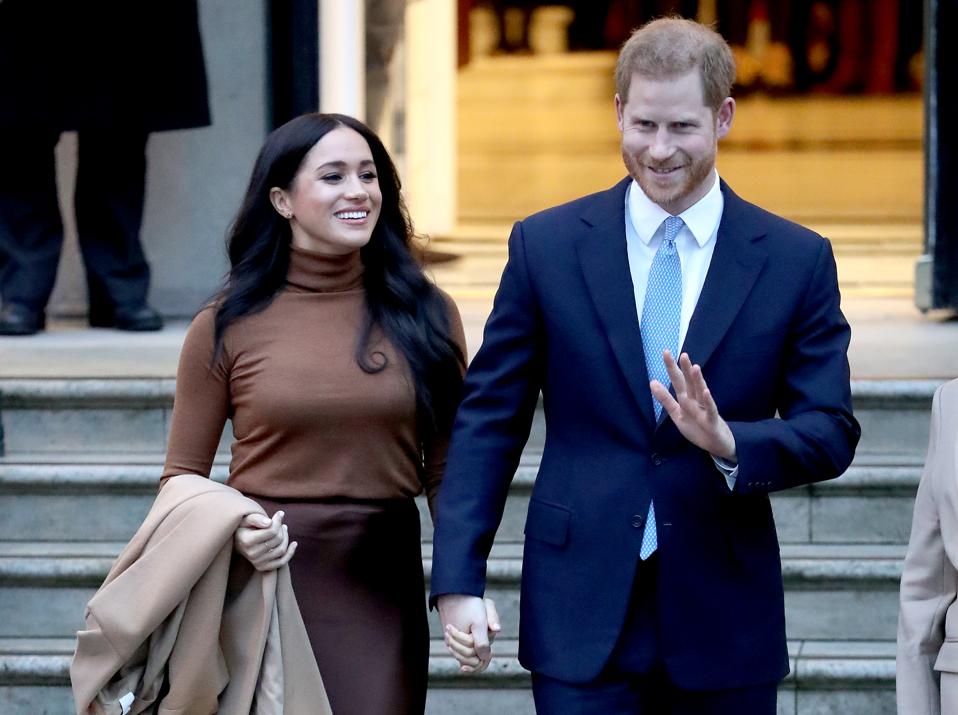 Prince Harry, Duke of Sussex and Meghan, Duchess of Sussex depart Canada House on the day before … [+] they announce their planned step down from royal life. (Photo by Chris Jackson/Getty Images)

A 93-year-old woman said by some to be out of touch and mocked for wearing “sensible shoes” is teaching two Millennials a thing or two about public relations in the modern era.

The hard lessons are being delivered by Queen Elizabeth II. She has shown herself to be an adept crisis manager after her grandson, Prince Harry, and his wife, Meghan Markle (aka the Duke and Duchess of Sussex) dropped their “Megxit” bomb via Instagram on January 8.

The duke and duchess said they wanted to step down from their roles as “senior royals,” take a lower profile and earn much of their own keep. They hope to protect their young son and themselves from the fierce, often unfair and sometimes racist glare of the public and news media. All things that could be seen as good and noble.

Instead of bouquets, they got brickbats and an even brighter media spotlight. A big reason is they violated some important rules when it comes to crisis communications. 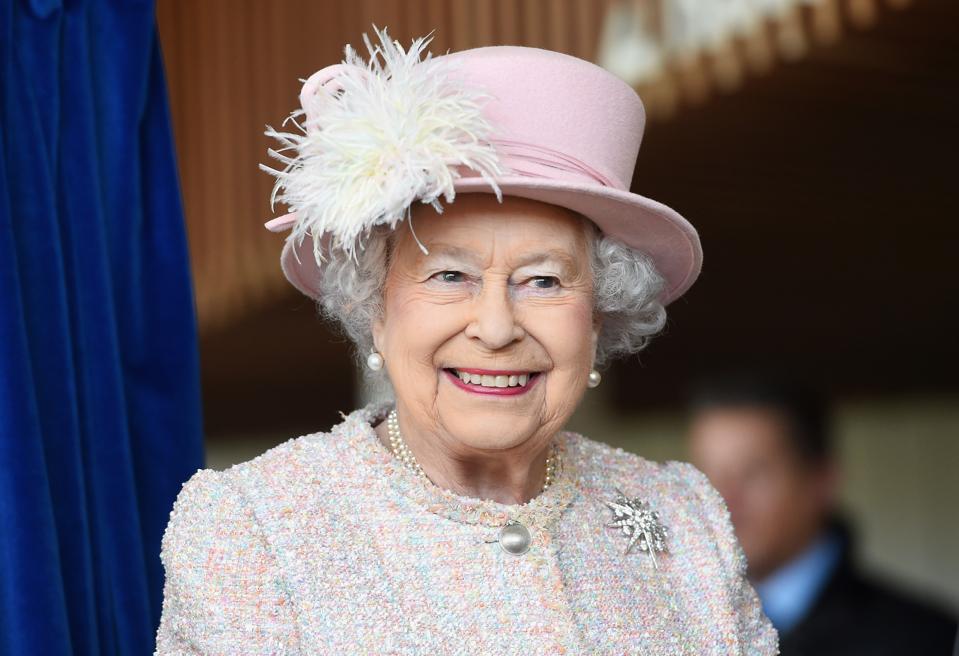 In stepped the queen, still reeling from not being given a heads-up by her grandson. She quickly got her comfy shoes planted firmly on the ground and took charge. She went on to conduct a top-tier seminar on how to communicate in a crisis.

While the duke and duchess may not have gotten everything they had hoped for from the split, they should be thankful to the queen.

Here are a few key crisis communications lessons to take from the initial announcement and the queen’s response:

Lesson No. 1: No surprises

Much of the criticism directed at Harry and Meghan has come not from that they wanted to step back, but how they announced it. They posted notice on their Instagram account and website before they told the queen and other members of the royal family. 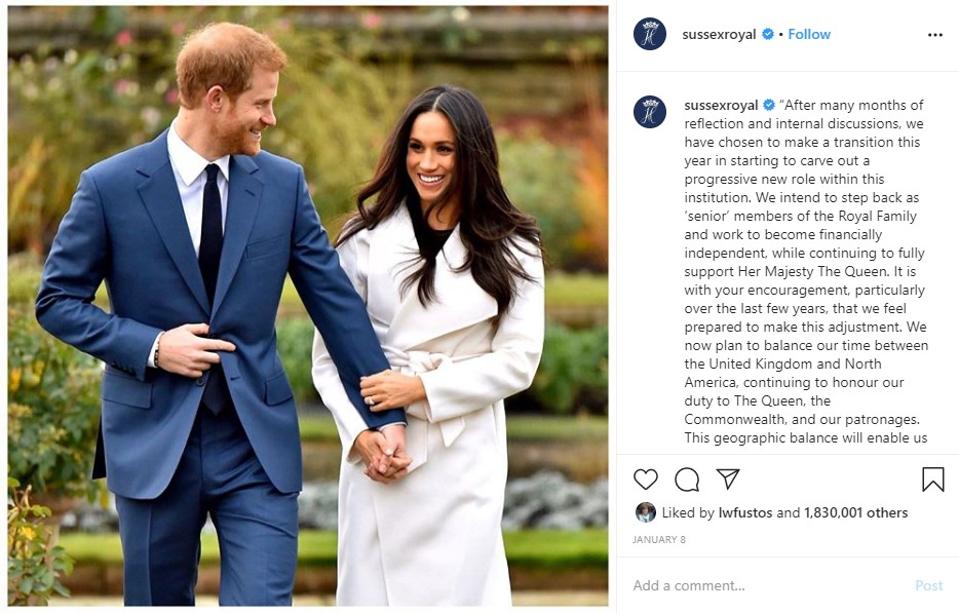 The Duke and Duchess of Sussex used Instagram to announce their plans to end their roles as “senior” … [+] members of the Royal Familyu.

Duke and Duchess of Sussex/Instagram

Their hope was for a sympathetic reaction to two young people seeking privacy and personal freedom. Instead, they were accused of being ingrates who didn’t have the decency to tell their immediate family. Much of the initial news coverage was on how angry and hurt the queen and Harry’s brother, Prince William, were.

Good communications planning calls for alerting all key stakeholders at the right time and in the right way. The best plans have minute-by-minute schedules detailing who gets notified by whom, when and how. In person first for the most-important people and most-sensitive information, not text messages or DMs. Cascade it down from there. At all costs, make sure important people who might be quoted about your story don’t react to reporters by saying, “That’s news to me.”

While Harry and Meghan appeared to be overwhelmed by the intense negative reaction, the queen remained calm and composed – at least publicly. She reacted quickly.

The queen issued her first statement the day the news broke: “Discussions with The Duke and Duchess of Sussex are at an early stage. We understand their desire to take a different approach, but these are complicated issues that will take time to work through.”

Brief, but conciliatory. Understanding their “desire to take a different approach.” Stating the obvious (“complicated issues”), but at least buying some time.

Later statements continued that same conciliatory tone. In her next statement, on January 13, the queen talked of the “very constructive discussions” she had in a quickly arranged family meeting.

“My family and I are entirely supportive of Harry and Meghan’s desire to create a new life as a young family. Although we would have preferred them to remain full-time working Members of the Royal Family, we respect and understand their wish to live a more independent life as a family while remaining a valued part of my family.”

And, in announcing the settlement of how things will be, the queen dropped rose petals at Meghan’s feet.

“I want to thank them for all their dedicated work across this country, the Commonwealth and beyond, and am particularly proud of how Meghan has so quickly become one of the family.”

The queen made it clear the arrangements for Harry and Meghan’s exit would be settled quickly. While acknowledging the transition might take a little time, there would be no letting this drag on for weeks or months.

“These are complex matters for my family to resolve, and there is some more work to be done, but I have asked for final decisions to be reached in the coming days,” the queen said in her statement of January 13.

The queen’s statement didn’t mention the details, just saying it was “a constructive and supportive way forward for my grandson and his family.” She also said, “Harry, Meghan and (their son) Archie will always be much loved members of my family.” 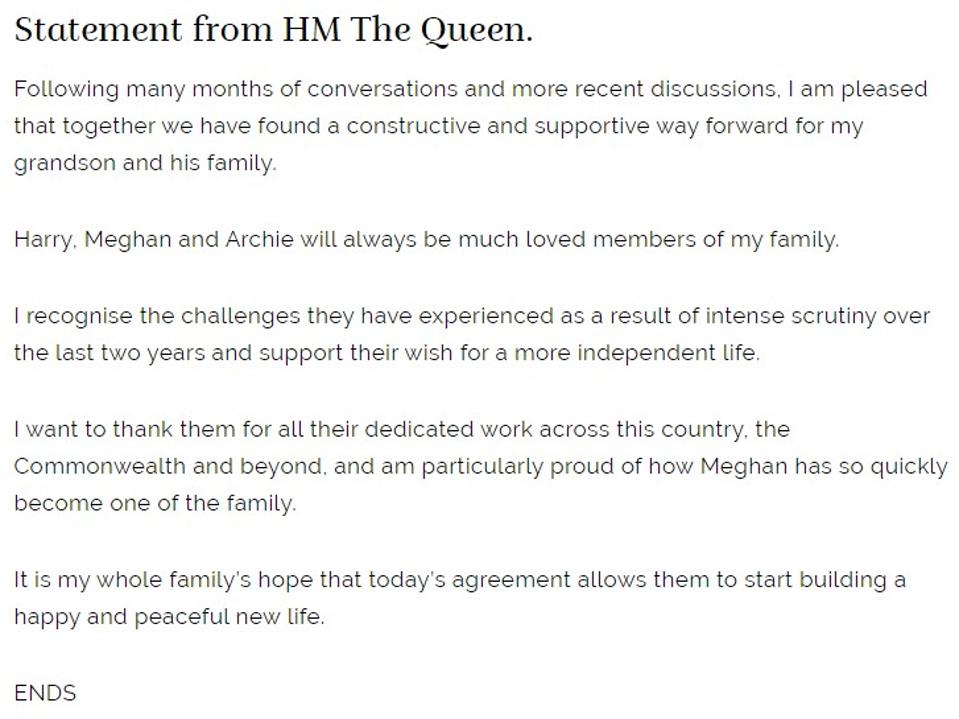 While it is clear the queen dictated the terms, she left it to Harry to spell them out in his first statement since the initial announcement: he and Meghan are required to step back from royal duties, including official military appointments; no longer receive public funds; lose their “royal highness” titles; and repay the costs of refurbishing Frogmore Cottage, which will remain their UK family home.

Queen Elizabeth II and the rest of the British royals haven’t always gotten it right. The queen came in for particularly harsh criticism for her initial reaction to Princess Diana’s death. Her middle son, Prince Andrew, is embroiled in the sex-trafficking mess of the late Manhattan financier Jeffrey Epstein. There are many other examples.

But, in this instance, the queen showed she is still in charge and knows how to respond. Maybe there is something to be said for nearly 68 years of on-the-job training.