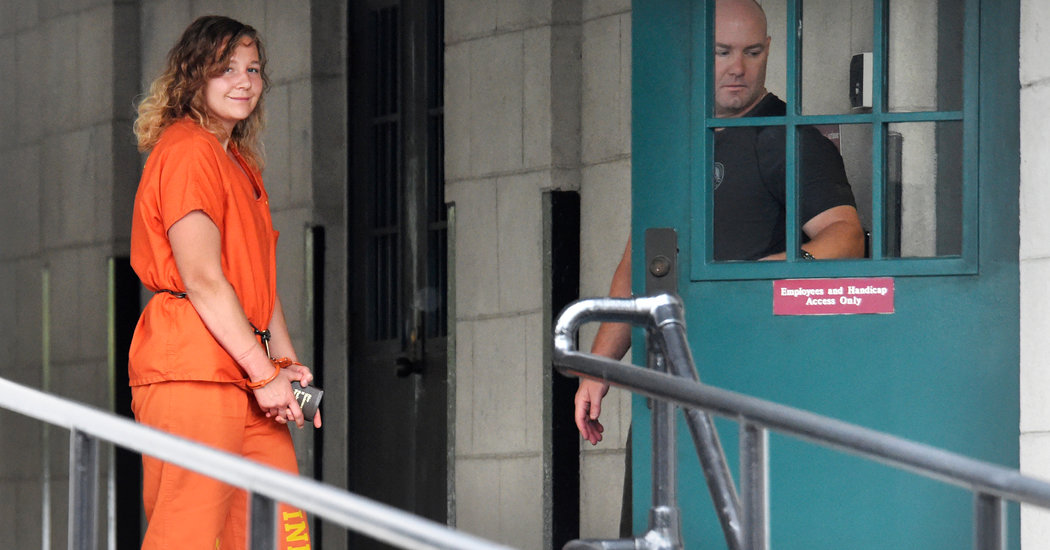 An Air Force veteran who has been imprisoned for nearly three years for leaking a classified report on Russian hacking while she was an intelligence contractor applied for clemency from President Trump on Monday.

The contractor, Reality L. Winner, 28, petitioned the Office of the Pardon Attorney, which is part of the Justice Department, to commute the rest of the 63-month sentence that she received in 2018.

A lawyer for Ms. Winner submitted more than 4,500 letters of support from members of the public with the application. During a news conference in Dallas on Monday, Ms. Winner’s family said that they hoped the materials would prompt Mr. Trump’s intervention in the case.

At the time of Ms. Winner’s sentencing, Mr. Trump said on Twitter that the punishment was “unfair” and that what Ms. Winner had done was “small potatoes compared to what Hillary Clinton did.”

Mr. Trump did not elaborate on his criticism of Mrs. Clinton, whom he regularly assailed during the presidential campaign for using a private email account for correspondence as secretary of state. He directed his comments on Ms. Winner’s sentence toward Jeff Sessions, who was attorney general at the time.

Ms. Winner, a former Air Force linguist and Kingsville, Texas, native, was the first person to be sentenced under the Espionage Act since Mr. Trump took office.

“She was a nobody and they used her for a patsy and an example,” Gary Davis, Ms. Winner’s stepfather, said at the news conference. “To me, that is not what America is about. To me, America is about justice, and the inequality and the inequity that she’s suffered and been put through has been horrendous to observe as a father.”

Clemency is different from a pardon, which is an erasure of an entire criminal charge. Applications for both can languish for months, if not years.

The White House declined to comment on Monday, and the Justice Department did not immediately respond to questions on Ms. Winner’s clemency application.

The power of the president to procure more lenient prison sentences for lawbreakers has come under heightened scrutiny after the Justice Department last week overruled the sentencing recommendations of its own prosecutors in the obstruction and perjury case of Roger J. Stone Jr., a longtime friend and informal adviser of Mr. Trump. The four main prosecutors quit the case after the Justice Department pushed for a lighter sentence.

Alison Grinter Allen, a lawyer for Ms. Winner, avoided comparisons with Mr. Stone’s case during an interview on Monday, but suggested that Mr. Trump was open-minded.

“This president has been willing to use his pardon power without regard to many of the conventions that have been put together to guide and advise a president on pardons and commutations,” she said. “We know the president pays attention to Twitter and media, and we are hoping that the president sees this for what it is and that is an opportunity to put right a great injustice.”

In 2016, Ms. Winner was awarded the Air Force Commendation Medal for her work as a cryptologic language analyst, which the military said had helped locate 120 enemy combatants during 734 airborne sorties.

Fresh out of the military, she went to work as a National Security Agency translator for Pluribus International, an intelligence contractor.

In May 2017, Ms. Winner used her work computer to print out a top-secret report on detailed hacking attacks by a Russian intelligence service against local election officials and voter registration databases during the 2016 election, according to prosecutors. She smuggled the report out of the contractor’s Augusta, Ga., offices in her pantyhose and mailed it anonymously to the online news outlet The Intercept, prosecutors said.

Bobby L. Christine, the U.S. attorney for the Southern District of Georgia, said at the time that the report that Ms. Winner leaked revealed sources and methods of intelligence gathering and that its disclosure “caused exceptionally grave damage to U.S. national security.”

Ms. Grinter Allen said at the news conference that the Espionage Act was a vestige from World War I and that Ms. Winner’s sentence was unduly harsh. She said Ms. Winner had accepted responsibility for her actions and had served her country admirably.

The letters supporting the clemency application were collected through a website set up for Ms. Winner, who was held for more than a year while prosecutors built their case — time that counted toward her sentence.

“Continuing to punish Reality Winner does not serve our national interests,” Ms. Grinter Allen said. “If anything, it sends a message that the truth is more to be feared than foreign lies.”

Ms. Winner is imprisoned at the Federal Medical Center Carswell in Fort Worth, where her family and lawyer said she had showed signs of significant stress.

“Every day that passes, I feel like we’re losing a little piece of my daughter and who she is,” said her mother, Billie Winner-Davis. “She’s losing hope. I’m begging this president to just look at Reality. Look at her life. Look at her service to this country and weigh that. She’s not a threat to anyone and she doesn’t deserve this.”