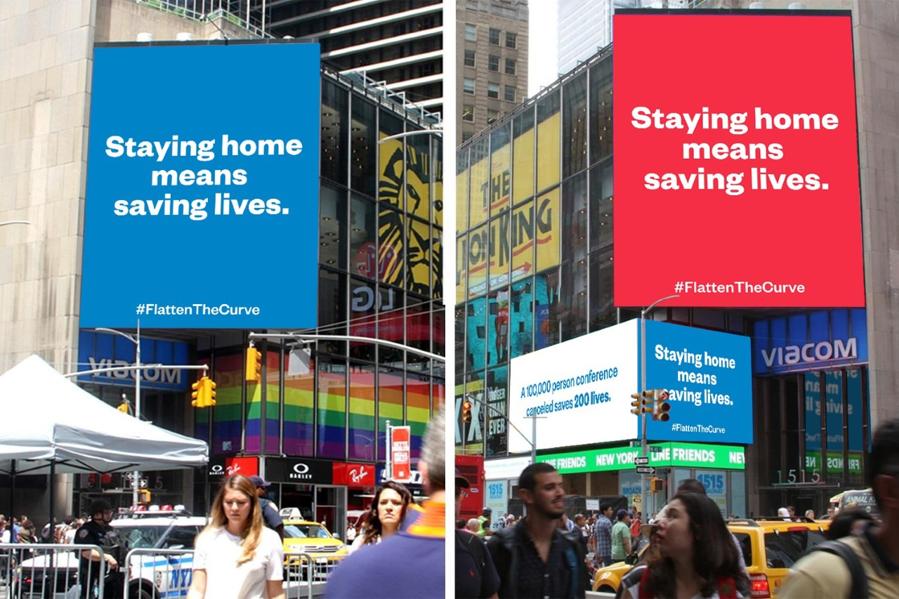 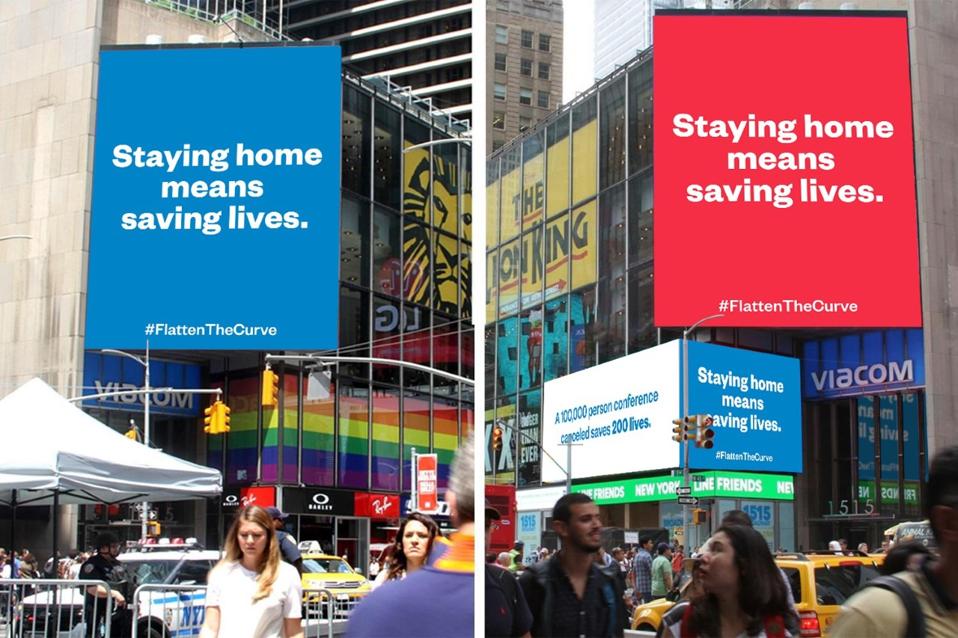 A mock-up of a billboard in Times Square today bought by Reddit Co-Founder Alexis Ohanian to … [+] encourage people to stay home and not spread COVID-19.

Alexis Ohanian wants you to stay home, and he’s using Times Square to send the message.

The Reddit co-founder and venture capitalist has bought a billboard in the heart of New York telling people to help slow the spread of COVID-19 by staying home and away from crowds. The billboard, which will only be up today, uses a simple phrase: “Staying home means saving lives.” At the bottom is the hashtag “#FlattenTheCurve,” which refers to how slowing the spread of the novel coronavirus can help health care providers and other officials better manage the number of illnesses as the pandemic plays out.

In an interview with Forbes on Friday night, Ohanian said the idea “just kind of popped in my head” on Thursday, and he thought out-of-home advertising seemed like a way to reach the masses of people who might not yet be taking the crisis seriously.

“It was a deliberate approach to think what is one of the densest populations of people in the U.S. and on a normal day that would be Times Square,” he said. “And then you have this cultural prominence. The sort of meme of it is here is a billboard in Times Square about flattening the curve, just preventative measures to defeat COVID-19.”

To buy the billboard, he used AdQuick, a digital out-of-home advertising startup where he’s on the board and an investor through his VC, Initialized Capital. Just last month, the company closed a $6 million Series A round led by Initialized. Before that, back in 2018, Ohanian invested $2.1 million in a seed round, and AdQuick has now raised a total of $9.2 million, according to Crunchbase.

The cost of the billboard was not disclosed, but Ohanian it’s “not important.” However, he said he’s betting on the OOH ad being something that people will not just see in-person if they do happen to be in the middle of Manhattan, but also something people will post on social media that is “a stronger and stronger way to effect people.”

“It becomes a really effective way to counter program,” he said.

Ohanian is staying home, too. He said Initialized closed its office last week and plans to have everyone work from home for the next six or eight weeks and said most of his portfolio companies are now mostly remote as well.

While OOH advertising has made a comeback in recent years, Ohanian is no stranger to the medium. He remembers buying his first billboard about a decade ago while trolling the Lamar Smith, the former Republican U.S. Congressman from Texas, who in 2011 sponsored the Stop Online Piracy Act, a failed bill in the U.S. House that was widely criticized by the tech industry. Ohanian placed the billboard outside of Smith’s office “on behalf of the internet,” but in the process realized how difficult it was to buy a billboard back then. (He said it was a “huge pain” to get it up and took multiple phone calls and even a fax message.)

But the message was effective, he said, and a lot more people saw his billboard in Texas when it landed on the front page of Reddit and by going viral on Twitter.

“Because it occupied physical space and there’s no way to ad block it and the placement is event sends a message itself, it’s the only form of advertising that can organically be spread,” he said. “Nobody is actively taking a screen shot of a Facebook ad unless it’s gone terrible wrong.”

And now, nearly a decade later, Ohanian is hoping his latest billboard will yet again another message, albeit a very different one. He referenced the 1996 film Independence Day—where the world comes together to fight an alien invasion—adding that he hopes the coronavirus might on some way unite people during an increasingly divisive point in history.

“This is an alien invader,” Ohanian said of COVID-19. “This is something that does not care about any of us. Does not care about how we voted. It has united us in a way and I hope we can work together to defeat it.”