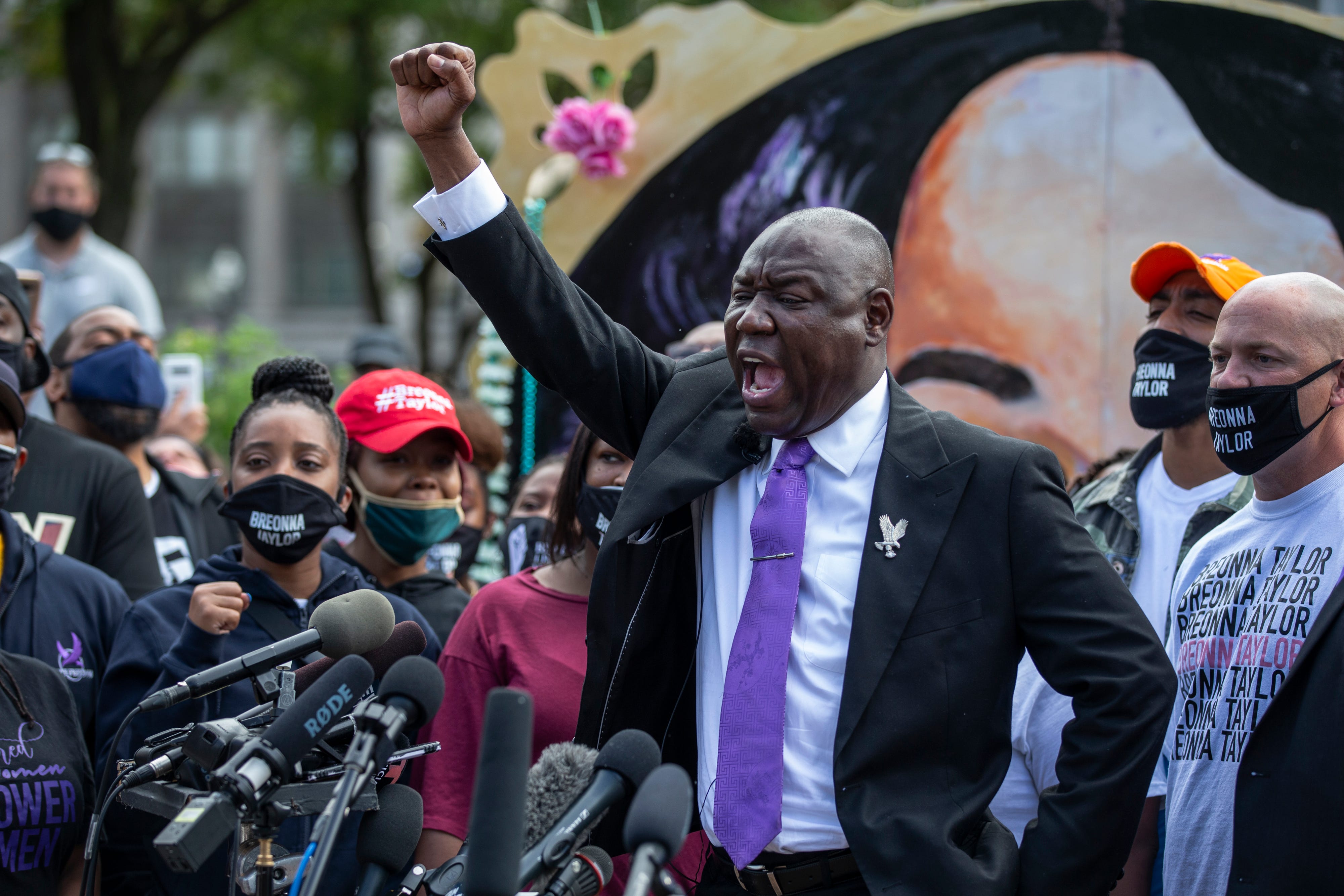 LOUISVILLE, Ky. — Members of Breonna Taylor’s family and their attorneys on Friday called on Kentucky’s attorney general to release the transcripts of the grand jury proceedings that led to the decision not to indict any officer in her fatal shooting.

The press conference came after a hectic night for Louisville. Police arrested at least two dozen protesters, including a state legislator, Thursday night as around 100 people huddled on a nearby church’s property, hoping to avoid additional arrests.

Ben Crump, one of the attorneys for the family, questioned what evidence Kentucky Attorney General Daniel Cameron presented to the jury. He spoke Friday at Jefferson Square Park, the epicenter of protests, in the family’s first press conference since the decision was announced. Crump called the decision part of a “pattern of the blatant disrespect and marginalization of Black people, but especially Black women.”

“There seems to be two justice systems in America: One for Black America, and one for white America,” Crump said, before leading the crowd in chants of “release the transcripts.”

Lonita Baker, another attorney for the family, demanded that Cameron reveal whether he presented any charges against the officers who shot Taylor to the grand jury.

The latest from Louisville:Cop injured in Breonna Taylor shooting threatens lawsuits over being called ‘murderer’

Fact checking 8 myths: Was she asleep when police shot her? Is there body-cam footage?

The grand jury on Wednesday indicted former Louisville officer Brett Hankison on wanton endangerment charges for firing 10 rounds into Taylor’s apartment and an adjoining unit where three people were present. Hankison was fired in June.

Taylor, a 26-year-old ER technician, was killed shortly before 1 a.m. on March 13 when officers came to her apartment looking for drugs and cash as part of a larger narcotics investigation connected to her former boyfriend. She was shot six times.

None of the officers who fired shots that killed Taylor were charged, with Cameron saying they acted in self-defense after Taylor’s boyfriend, Kenneth Walker, fired at them first.

But other prosecutors in Kentucky, notably Dave Stengel, the former commonwealth’s attorney in Jefferson County where Louisville is located, have disclosed whether they made recommendations to grand juries in police shooting cases — or left decisions solely up to the grand jury.

So have prosecutors in other states.

In 2015, for example, after a 13-month investigation of the police shooting of 12-year-old Tamir Rice, who was shot in a Cleveland park while holding a toy gun, the Cuyahoga County prosecutor disclosed that he advised the grand jury to issue no indictment.

Kentucky’s grand jury secrecy rule says “all persons present during any part of the proceedings of a grand jury shall keep its proceedings and the testimony given before it secret.”

Bennett Gershman, a nationally recognized expert on prosecutorial ethics who teaches law at Pace University in New York, said under those rules prosecutors could elect to reveal their grand jury recommendations or keep them confidential. He said he is not aware of any prosecutor being sanctioned for disclosing a recommendation.

Elizabeth Kuhn, a spokesperson for Cameron, issued a statement Friday saying the attorney general “understands that the family of Ms. Breonna Taylor is in an incredible amount of pain and anguish, and he also understands that the outcome of the Grand Jury proceedings was not what they had hoped.

“Regarding today’s statements at the press conference, everyone is entitled to their opinion, but prosecutors and grand jury members are bound by the facts and by the law. Attorney General Cameron is committed to doing everything he can to ensure the integrity of the prosecution before him and continue fulfilling his ethical obligations both as a prosecutor and as a partner in the ongoing federal investigation.”

Tamika Palmer, Taylor’s mother, said that although Cameron had the power to help the city start healing she knew he would “never do his job,” in a statement read Friday by Bianca Austin, Taylor’s aunt.

“I was reassured Wednesday of why I have no faith in the legal system, in the police, in the law,” Palmer’s statement said. “They are not made to protect us Black and brown people.”

Austin, continuing to read Palmer’s statement, said that police “robbed the world of a queen.”

More from Tamika Palmer:Hopes dashed twice for Breonna Taylor’s mother over lack of charges against officers

Tamika Mallory, co-founder of social justice group Until Freedom that has been staging protests in Louisville, called Cameron a “coward” and a “sell-out” who upheld the system of white supremacy. Mallory also criticized him for his endorsement last year by the city’s police union, after which Cameron pledged to be an advocate for police.

“He’s a man of his word as it related to his relationship to police … he protected the police,” she said. “We have no respect for you.”

Mallory again called on Louisville Mayor Greg Fischer to fire the officers who shot Taylor and pledged to continue to protest until he does so. She said protesters would begin gathering again at 5 p.m. Friday.

Fischer in a media briefing Friday stressed that “violence and destruction will not be tolerated.”

“I know that most protesters continue to be peaceful and lawful,” Fischer said. “But I want to caution the peaceful protesters: If you’re in a group where disruptive and violent behavior is happening, you need to separate from that group, or you will be subject to arrest.”

Meanwhile, state Rep. Attica Scott, who was arrested Thursday night during protests and released from jail Friday morning, said she is going to make sure Breonna’s Law — a statewide law to ban no-knock search warrants — will be heard.

The family was also joined Friday by Jacob Blake Sr., the father of Jacob Blake Jr., who was recently shot in the back by police in Kenosha, Wisconsin. Blake Sr. said he came down to Louisville to support Palmer.