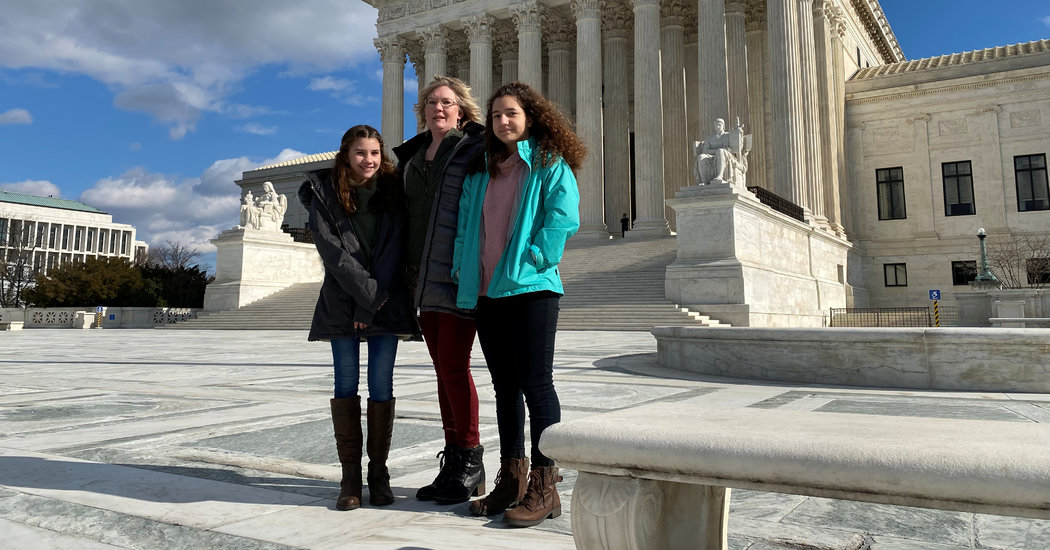 WASHINGTON — A potentially landmark education case before the Supreme Court on Wednesday has pulled in heavy hitters on both sides of the school choice debate who are trying to shape a ruling that could end decades of wrangling over school vouchers and religious education.

On the other side, Democratic state governments, school boards and teachers’ unions argue that a ruling in favor of a disbanded voucher program in Montana could open the floodgates for publicly funded religious education while draining traditional public schools.

Such a decision would be a “virtual earthquake” in the public education system, said Randi Weingarten, the president of the American Federation of Teachers. She added that it would send money cascading away from public schools.

“It will basically change 200 years of practice,” Ms. Weingarten said.

The case challenges a decision to shut down a program that provided tax breaks to donors who funded scholarships that families could use at private schools, including religious ones. Montana discontinued the program after a ruling by its high court found that it had violated a provision in its Constitution that prohibited the use of government funding, either directly or indirectly, for religious purposes. Such provisions, known as no-aid provisions or Blaine Amendments, exist in 37 states and were driven initially by anti-Catholic bias. They are now seen as the last line of defense against widespread acceptance of school voucher programs.

The conservative-leaning high court could finally settle whether vouchers blur the constitutional line between church and state.

Lawyers at the Institute for Justice, the libertarian law firm that is representing three Montana families, said the case could produce one of the most significant education rulings in the last half-century. The Supreme Court has ruled that states may include religious schools in publicly funded school choice programs, but a ruling that would essentially require it would be groundbreaking.

“If we win this case, it will be the U.S. Supreme Court once again saying that school choice is fully constitutional and it’s a good thing,” said Erica Smith, a senior lawyer at the Institute and co-counsel in the Espinoza case. “And that will provide momentum to the entire country.”

Education Secretary Betsy DeVos has proposed a $5 billion federal tax credit scholarship program that would allow states to adopt initiatives much like the one Montana struck down. Ms. DeVos, who sent her own children to private religious schools, tried to defeat the Blaine Amendment in her home state, Michigan.

“These amendments only serve to keep too many children away from a better education, including one that better aligns with their family’s values,” Ms. DeVos said in a statement.

Lawsuits could compel public agencies to provide comparable funding and benefits to religious schools if the agencies support other private schools. If the court rules that state prohibitions on the use of government funding for religious purposes are rooted in bigotry, plaintiffs could emerge to say other major issues, like the Electoral College, have the same roots.

“If it’s unconstitutional to exclude private religious schools from a program that provides aid for public schools, it’s hard to see where the line is drawn and where the neutrality principle ends,” said Kevin Welner, the director of the National Education Policy Center and a professor at the University of Colorado at Boulder School of Education. “It’s a fascinating Pandora’s box they could open.”

About 18 states offer tax credit scholarship programs — which overwhelmingly serve low-income families or those of color — and Ms. Smith said several other states have interpreted their provisions to prohibit the programs.

In 2017, the Supreme Court issued a narrow ruling in a similar case, Trinity Lutheran v. Comer, where it said Missouri had violated the First Amendment by barring religious institutions from a state-funded program to make playgrounds safer. In a footnote of the majority opinion, Chief Justice John G. Roberts Jr. wrote that the case “involves express discrimination based on religious identity with respect to playground resurfacing. We do not address religious uses of funding or other forms of discrimination.”

When Justice Brett M. Kavanaugh, who has defended religious groups’ access to public benefits and a school voucher program in Florida, joined the court in 2018, advocates on both sides of the choice debate anticipated that any ambiguity around that footnote would soon be settled.

Montana’s tax credit, enacted in 2015, provided up to $150 to donors who supported scholarships “to provide parental and student choice in education.” The state’s Department of Revenue later determined that religious schools — about 70 percent of Montana’s private schools — could not participate.

The Montana Supreme Court ultimately found the entire program violated the state’s Constitution, and the state shut it down. The Institute for Justice will argue before the Supreme Court that the shutdown violated its clients’ rights to free exercise of religion and equal protection under the law.

Montana has argued that the “no aid” amendment in the state’s Constitution does not prohibit any religious practice, nor does it discriminate against any one religion. While the provision dates to 1884, it was re-ratified in 1972 by delegates who stated that it was to avoid “religious entanglement” and to preserve funds for public schools. The decision to discontinue the tax credits for secular and religious schools was aimed at both goals, they said.

Where the state saw neutrality, Kendra Espinoza, the named plaintiff in the case, saw bias. Ms. Espinoza, a single mother of three girls who works three jobs, wants to use the program to keep her daughters in Stillwater Christian School, in Kalispell, Mont. She believes the decision to shut down the program was in part a “push to have every student in public education.”

“If the program was there and it was struck down simply so that people of religious faith could not access it, then that’s discrimination,” Ms. Espinoza said in an interview with The New York Times last month.

Justice Department lawyers argued that the application of the constitutional amendment in Montana “penalizes parents who choose a religion rather than a secular school for their children.”

Amicus briefs have poured in. Several public education groups, such as the AASA, the School Superintendents Association, wrote that at play was a “voucher scheme” that “shifts public funds away from the local public school, to the detriment of students who have no real choice but to remain.”

Civil liberties groups, like Americans United for Separation of Church and State and the American Civil Liberties Union, argued in a brief that a ruling against Montana would force taxpayers to fund religious indoctrination and discrimination in schools. The groups cited curriculums and handbooks from religious schools that participated in the Montana program. One school said its biology students would “see the contradictions between what is popular science today and the truth of God’s word.” Another required its students to “come from a family that celebrates biblical values” and that at least one parent “be born again.”

Choice-friendly research groups, like EdChoice, argued that the high court’s intervention was necessary to resolve a “deep split” in lower courts.

“The families, taxpayers and communities that find themselves on the wrong side of the judicial divide will continue to be deprived of the substantial educational, fiscal and civic benefits that religiously neutral educational-choice programs provide,” the groups wrote.