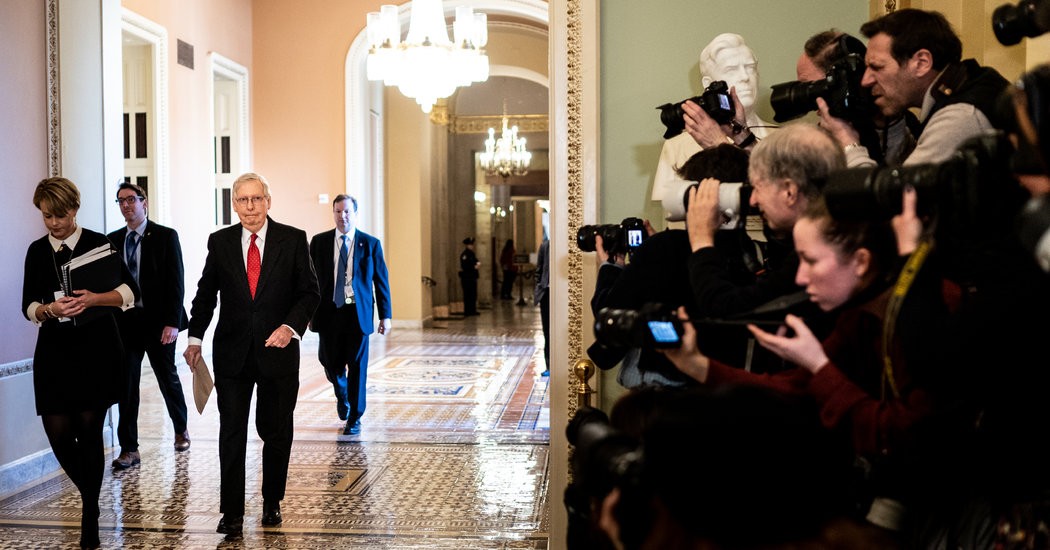 WASHINGTON — A divided Senate began the impeachment trial of President Trump on Tuesday in utter acrimony, as Republicans blocked Democrats’ efforts to subpoena documents related to Ukraine and moderate Republicans forced last-minute changes to rules that had been tailored to the president’s wishes.

In a series of party-line votes punctuating hours of debate, Senate Republicans turned back repeated attempts by Democrats to subpoena documents from the White House, the State Department and the Office of Management and Budget that could shed light on the core charges against Mr. Trump. More votes were to come throughout the evening on Democratic efforts to subpoena current and former White House officials, although the outcome was expected to be the same.

The debate between the House impeachment managers and the president’s legal team played out in a Senate chamber transformed for the occasion, with Chief Justice John G. Roberts Jr. presiding from the marble rostrum and senators sworn to silence looking on from desks piled with briefing books. It was the substantive start of the third presidential impeachment trial in American history.

On its face, Tuesday’s debate was a technical one about the rules and procedures to govern the trial. But it set the stage for a broader political fight over Mr. Trump’s likely acquittal that will persist long after the proceeding is over, helping shape the 2020 campaign.

Democrats were laying the groundwork to argue that the trial was a cover-up rigged on Mr. Trump’s behalf and to denounce Republicans — including the most vulnerable senators seeking re-election in politically competitive states — for acquiescing. Republicans, for their part, insisted that the Senate must move decisively to remedy what they characterized as an illegitimate impeachment inquiry unjustly tarring the presidency.

Standing in the well of the Senate, the Democratic House impeachment managers urged senators to reject proposed rules from the majority leader, Senator Mitch McConnell of Kentucky, that would delay a debate over witnesses and documents until the middle of the trial, with no guarantee that they would ever be called.

“If the Senate votes to deprive itself of witnesses and documents, the opening statements will be the end of the trial,” said Representative Adam B. Schiff of California, the lead manager. He said Mr. McConnell’s proposal was tantamount to saying, “Let’s have the trial, and maybe we can just sweep this all under the rug.”

If adopted, the resolution would pave the way for the trial to move forward as soon as Wednesday afternoon with oral arguments from the House managers presenting the case for removing Mr. Trump that they previewed on Tuesday.

At the heart of the trial are charges of abuse of power and obstruction of Congress approved last month by the Democratic-led House. They assert that Mr. Trump used the power of his office to pressure Ukraine to announce investigations into his political rivals, withholding as leverage nearly $400 million in military aid and a White House meeting. The president then sought to conceal his actions from Congress, the charges say, by blocking witness testimony and documents.

Mr. Trump’s legal team argues that the charges are baseless and amount to criminalizing a president’s prerogative to make foreign policy as he sees fit. In a break with most constitutional scholars, they also claim that the impeachment was unconstitutional because the articles of impeachment do not outline a specific violation of a law.

But on Tuesday, the debate focused principally on what would constitute a fair trial.

“This initial step will offer an early signal to our country,” Mr. McConnell said before it got underway. “Can the Senate still serve our founding purpose?”

Yet Mr. McConnell also received a sharp reminder on Tuesday about the limits of his power to control an inherently unpredictable proceeding with few precedents.

Under pressure from Republican moderates, he was forced to make some last-minute changes to the set of rules he unveiled on Monday, which would have squeezed opening arguments by both sides into two 12-hour marathon days and refused to admit the findings of the House impeachment inquiry into evidence without a separate vote later in the trial.

The compressed timetable was in line with a White House request to quickly dispense with opening arguments so that Mr. Trump’s team could complete his defense before the weekend.

But Senators Susan Collins of Maine, Rob Portman of Ohio and Lisa Murkowski of Alaska, among others, objected privately to those provisions, which they believed departed too much from procedures adopted unanimously by the Senate for the 1999 trial of President Bill Clinton. At a closed-door luncheon with Republican senators in the Capitol just before the trial was to begin, the senators raised their objections, according to aides familiar with the conversation, and Mr. McConnell rushed to submit a revised copy of the resolution — with lines crossed out and changes scrawled in pen in the margins — when it was time for the debate.

When the resolution was read aloud on the Senate floor, two days had been extended to three and the House’s records would be automatically admitted into evidence, although Mr. McConnell inserted a new provision that would allow Mr. Trump’s team to move to throw out parts of the House case.

The last-minute reversal underscored the outsize influence of a small group of moderate Republicans in the narrowly divided Senate whose interests and demands could prove decisive to shaping the impeachment trial, beginning next week in a more formal debate over witnesses and documents.

Half a world away, Mr. Trump, in Davos, Switzerland, for the World Economic Forum, sought to use the global stage to project confidence about his standing at home. He swatted away questions from reporters about the impeachment trial, instead bragging about the strength of the American economy under his leadership.

But in the Senate chamber, his lawyers replayed for senators many of his most frequent and personal grievances, accusing Democrats in only slightly more lawyerly terms of conducting a political search-and-destroy mission that Mr. Trump rails about daily on Twitter.

“It’s long past time that we start this so we can put an end to this ridiculous charade and go have an election,” said Pat A. Cipollone, the White House counsel.

The historically rare debate was rendered even more unusual by Senate rules that prohibit senators from speaking on the chamber floor for the duration of the proceedings and instead empower the House managers and White House defense lawyers to debate the proposals. The effect was that on the trial’s first day, the Senate chamber split cleanly into partisan factions, with the managers siding with Senate Democrats and Mr. Trump’s lawyers taking the place of the Republicans.

“We believe that once you hear those initial presentations, the only conclusion will be that the president has done nothing wrong,” Mr. Cipollone said, “and that these articles of impeachment do not begin to approach the standard required by the Constitution.”

Democrats, who came armed with digital slides and video clips to drive home their arguments, spent hours detailing the factual record compiled by the House investigation and cataloging the witnesses and documents Mr. Trump had succeeded in withholding. Senators facing such a grave decision as removing a president, they argued, have a responsibility to try to push all the facts to light.

“With the backing of a subpoena authorized by the chief justice of the United States, you can end President Trump’s obstruction,” said Representative Zoe Lofgren of California, the first woman in history to speak on the Senate floor as a House impeachment manager. “If the Senate fails to take this step, you won’t even ask for the evidence. This trial and your verdict will be questioned.”

Just an hour or so before the trial began, the seven House managers submitted one final written rebuttal to arguments put forward against their charges by Mr. Trump’s lawyers. In 34 pages, they rejected the lawyers’ assertion that abuse of power was not an impeachable offense and that Mr. Trump had acted legally when he ordered administration officials not to appear for questioning in the House or provide documents for the impeachment inquiry.

Locked in silence for much of the day, senators were able to talk only before the proceeding began or during brief breaks. Speaking to reporters on Tuesday morning, Senator Chuck Schumer of New York, the Democratic leader, denounced Mr. McConnell’s rules as deeply unfair and skewed toward Mr. Trump.

“It is completely partisan. It was kept secret until the eve of the trial,” he said. “The McConnell rules seem to have been designed by President Trump and for President Trump, simply executed by Leader McConnell and Senate Republicans.”

Each time, Mr. McConnell moved to kill the proposal before it could be considered, and was sustained by unified Republican support.

“This is the fair road map for our trial,” Mr. McConnell declared. “We need it in place before we can move forward. So the Senate should prepare to remain in session today until we complete this resolution and adopt it.”

Only two other American presidents have stood trial in the Senate for high crimes and misdemeanors. Andrew Johnson was impeached in 1868, and his trial took the better part of three months, featuring testimony from dozens of witnesses and extended periods for discovery, before he was ultimately acquitted by just a single vote. Mr. Clinton was tried in 1999 on charges of perjury and obstruction of justice. That proceeding lasted five weeks, included testimony from just three witnesses and resulted in an overwhelming acquittal.

Without witnesses, Mr. Trump’s trial could conclude by the end of January. If senators ultimately do call witnesses, that timeline could stretch weeks longer.