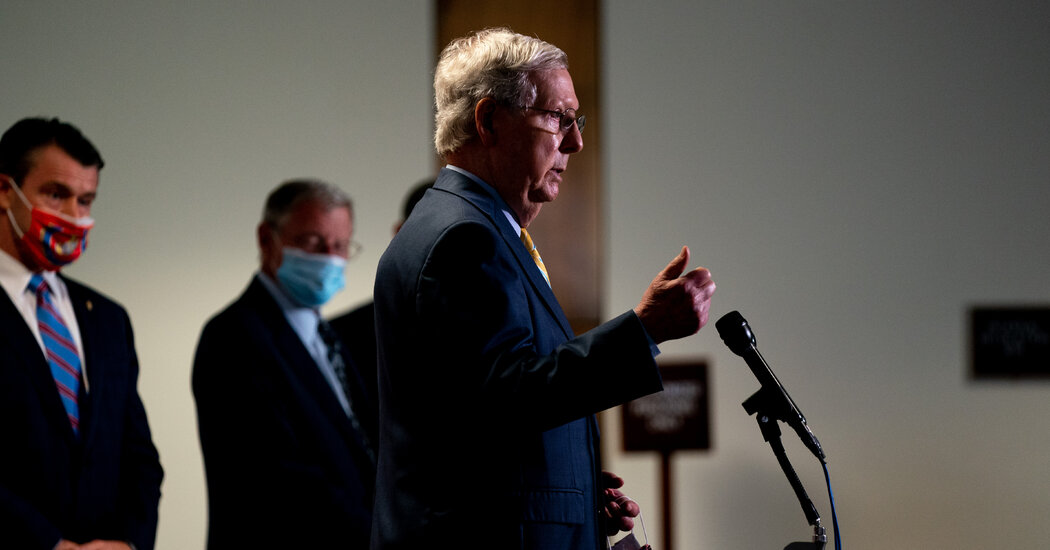 WASHINGTON — Republicans’ opening proposal for the next coronavirus relief package will include $105 billion for schools, additional funding for a popular federal loan program for small businesses and another round of direct payments to American families, Senator Mitch McConnell of Kentucky, the majority leader, said on Tuesday.

Sketching out the contours of what is expected to be a $1 trillion plan, Mr. McConnell doubled down on his insistence that the package also include liability protections for businesses, medical workers, schools and businesses navigating the pandemic — a proposal that Democrats fiercely oppose. Privately, officials working on the plan cautioned colleagues that the coming negotiation, a wide-ranging election-year brawl, was likely to stretch into August, leaving tens of millions of unemployed Americans without extra help as Congress hammers out the latest recovery plan and the virus surges.

But on Tuesday, Republicans faced an added challenge: coming to terms with their own president on the details of their legislation. Mr. McConnell did not say whether the education funding in his bill would be conditioned on schools holding in-person classes in the fall, in line with President Trump’s demands, and made no mention of a payroll tax cut that the president has pressed to include, which has little support in either party. Nor did he mention how his proposal would address the expiration of enhance unemployment benefits set to expire at the end of July, which Republicans have made clear they intend to scale back.

“The legislation I have begun to sketch out is neither another CARES Act to float the entire economy nor a typical stimulus bill for a nation that’s ready to get back to normal,” Mr. McConnell said on the Senate floor, referring to the $2 trillion economic stimulus bill passed in March. “Our country is in a complex middle ground between those two things.”

Senate Republicans planned to spend Tuesday trying to iron out the details of the emerging plan. Steven Mnuchin, the Treasury secretary, and Mark Meadows, the White House chief of staff, were to attend the party’s luncheon and then meet with leading Democrats, who have already laid out their own, far more expansive $3 trillion plan.

Republican senators and administration officials remain at odds over a number of key priorities of Mr. Trump’s, including tying new education funding to in-person classes, providing the payroll tax cut and leaving out funds for nationwide testing and top health agencies as the pandemic continues to spread.

“We’re all going to see if we can get on the same page,” Mr. McConnell told reporters.

Time is of the essence for lawmakers. The expanded jobless aid for the tens of millions of Americans laid off during the pandemic is set to expire at the end of the month, but a member of Mr. McConnell’s staff privately told Senate officials during a conference call on Tuesday that they expected the negotiations to be tumultuous and to stretch into early August, according to a person briefed on the conversation who insisted on anonymity to describe it. The package is widely seen as lawmakers’ last opportunity to address the pandemic with major legislation before the November elections.

Speaker Nancy Pelosi, along with Senator Chuck Schumer of New York, the minority leader, will host Mr. Mnuchin and Mr. Meadows in her office after the lunch. Speaking with House Democrats on Tuesday morning on a private call, Ms. Pelosi said she hoped their side could resolve its differences with Republicans and produce a bill by the end of next week, according to an official on the call who described it on the condition of anonymity.

Top Democrats have shown no sign of budging from the $3 trillion stimulus package the House approved in May, and are now proposing more spending. In a speech Tuesday morning, Mr. Schumer said what Republicans were proposing would fall “drastically short” of meeting the country’s needs.

While the House-passed measure would provide $100 billion for schools, Senate Democrats have now put forward a $430 billion plan for child care and schooling.

The Democratic leader sought to play up divisions between Senate Republicans and the White House, taunting that the two sides appeared to be united only in an interest to please “corporate interests” with tax breaks and liability protections. He said they should stop the infighting on a proposal that would never fly with Democrats anyway and start negotiating with his party.

“Right now the Republicans seem to want to play chicken with pandemic relief and string everyone along with a bill and a process we all know is doomed to fail,” Mr. Schumer said.