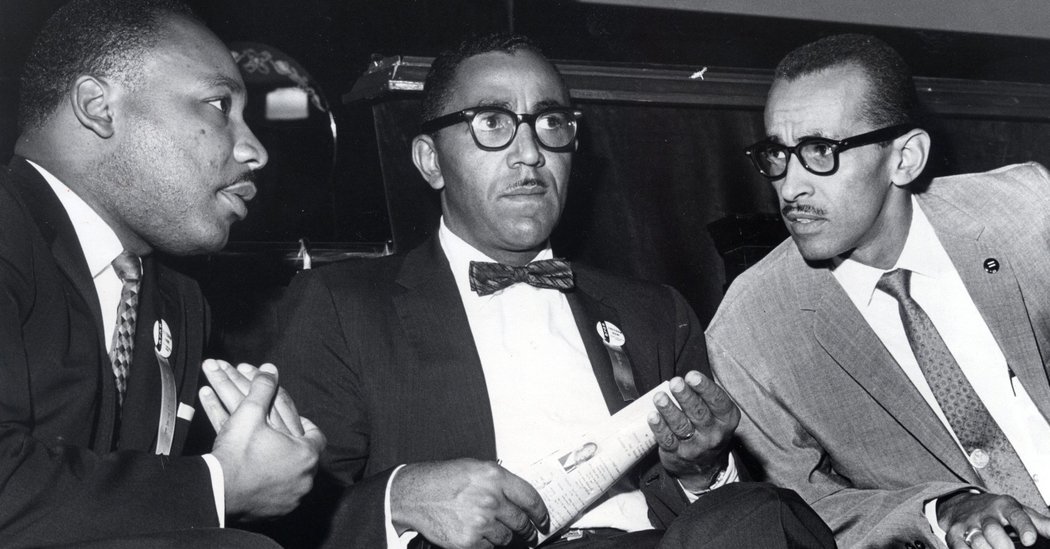 The Rev. Joseph E. Lowery, a lieutenant to the Rev. Dr. Martin Luther King Jr. who helped organize a pivotal moment in the civil rights movement — the bus boycott in Montgomery, Ala. — and who gave the benediction at President Barack Obama’s inauguration more than half a century later, died on Friday at his home in Atlanta. He was 98.

Even before Rosa Parks refused to give up her seat on a Montgomery bus on Dec. 1, 1955, Mr. Lowery had successfully campaigned to integrate buses in Mobile, Ala., where he was a young Methodist minister. After Ms. Parks’s action, he huddled with Dr. King and other Alabama ministers to oversee a 381-day boycott of Montgomery’s segregated buses.

In November 1956, the Supreme Court ended racial segregation on buses in Montgomery and, by extension, everywhere else.

Mr. Lowery was at Dr. King’s side almost until the day of his assassination in April 1968. At Dr. King’s request, he presented the demands of voting-rights marchers from Selma, Ala., to Gov. George C. Wallace in 1965. Mr. Lowery also helped found the Southern Christian Leadership Conference, Dr. King’s signature organization, and led it for 20 years, from 1977 to 1997.

When Dr. King gathered with his top aides days before his death, it was Mr. Lowery who ended the meeting by saying, “The Holy Spirit is in this room.”

Mr. Lowery marched in countless demonstrations, was repeatedly arrested and was once shot at by the Ku Klux Klan. As head of the S.C.L.C., he promoted economic empowerment for black Americans, saying they must control the cash registers of the lunch counters they integrated. He became known as the dean of the civil rights movement.

David J. Garrow, author of “Bearing the Cross: Martin Luther King Jr. and the Southern Christian Leadership Conference” (1986), said in an interview for this obituary in 2010 that Mr. Lowery was “the most prominent survivor” of the movement, “the human and symbolic link going all the way back.”

Mr. Lowery earned a reputation as a powerful speaker in the tradition of the black church, lacing his oratory with wit and rhyme. His oratory raised hackles in 2006 when, speaking at the funeral of Dr. King’s widow, Coretta Scott King, with President George W. Bush in attendance, he accused the Bush administration of spending on war while ignoring domestic needs.

“We know now there were no weapons of mass destruction over there,” Mr. Lowery said, alluding to Iraq. “But Coretta knew, and we know, that there are weapons of misdirection right down here.”

Some criticized his prayer at Mr. Obama’s inauguration, which borrowed from the Big Bill Broonzy song “Black, Brown and White Blues.”

“Help us work for that day when black will not be asked to get back,” he said, “when brown can stick around; when yellow will be mellow; when the red man can get ahead, man; and when white will embrace what is right.”

Mr. Obama, who had bowed his head, broke into a broad smile. Later that year, he awarded Mr. Lowery the Presidential Medal of Freedom.

Joseph Echols Lowery was born on Oct. 6, 1921, in Huntsville, Ala., where his father owned a pool hall and other properties. Mr. Lowery often recalled the day a police officer jabbed him in the stomach with a nightstick, when he was about 11 years old. Using a racial epithet, the officer said, “Don’t you see a white man coming in the door?”

Mr. Lowery said he ran home to get his father’s gun, but his father took it away and spanked him. When his father complained to the police chief, the chief said there was nothing he could do, explaining, “If I fired him, I’d hire another one that’d do the same damn thing.”

The incident “planted a seed in me,” Mr. Lowery told Emerge magazine in 1998. “It’s a wonder it didn’t make me hate.”

His family sent him to Chicago to live with relatives, but he returned to Huntsville to finish high school. He attended several colleges, including Paine College in Augusta, Ga., where he studied sociology.

He then worked for a black newspaper in Birmingham, Ala., where he reported on racist violence. In Birmingham he met Evelyn Gibson, a minister’s daughter, whom he married in 1947. In 1979, she founded the nonprofit group S.C.L.C./WOMEN (for Women’s Organizational Movement for Equality Now), which advocates for disadvantaged women, children and families. She died in 2013.

He also joined the Mobile chapter of the National Association for the Advancement of Colored People. After Alabama outlawed the organization in 1955, he helped form an independent group, the Alabama Civil Affairs Association, and became its president. After a one-day boycott of Mobile buses, the group was able to get rid of the rule that black Americans must give up seats to white passengers, although they still had to board at the back of the bus.

Mr. Lowery then joined Dr. King and two other Alabama ministers, Ralph Abernathy and Fred Shuttlesworth, in leading the bus boycott in Montgomery.

Mr. Lowery figured in a momentous Supreme Court decision in 1964, The New York Times Company v. Sullivan. He was one of four black ministers mentioned in an advertisement published by The Times soliciting donations to help defend Dr. King against a perjury indictment in Alabama.

L.B. Sullivan, a commissioner of Montgomery County, Ala., and others contended that they had been libeled by the ad, and an Alabama state court agreed, levying a $500,000 judgment against The Times and the ministers. Mr. Lowery’s car and other personal property were seized.

But in a unanimous decision, the Supreme Court reversed the state court’s ruling, saying that the statements in the ad had not been made with deliberate malice and that malice was necessary to prove libel against public officials. The ruling allowed the press to report more freely about civil rights and other subjects without fear of legal action.

For years, Mr. Lowery faced danger as he continued the civil rights struggle across the South and beyond. Only his sudden decision to take a train home from Nashville saved him from a bomb that detonated in his Birmingham motel room in 1963.

In 1979, he defied a Klan death threat and marched for leniency for a mentally disabled black man who was accused of raping two white women in Decatur, Ala. Bullets buzzed over his head.

Mr. Lowery had an almost impish sense of humor. He complained about not being able to take up a collection after his prayer at the Obama inauguration, and he once said he wished that Dr. King’s birthday was in a warmer month than January, since he always seemed to be invited to speak in cold weather.

Mr. Lowery succeeded Mr. Abernathy as president of the S.C.L.C. in 1977. At a time when membership, finances and enthusiasm had plunged, he revived the organization; led a 2,700-mile pilgrimage to Washington through five states to help win renewal of the 1965 Voting Rights Act in 1982; and successfully pushed businesses to hire more black Americans. He also supported gay rights, including marriage equality, and campaigned to end capital punishment by lethal injection.

In an interview with The Philadelphia Inquirer at the time of his retirement as S.C.L.C. president in 1997, Mr. Lowery said he had succeeded in his principal goal: maintaining Dr. King’s organization as “a prophetic voice crying in the wilderness.”