Richard F. Fenno Jr., a political scientist whose close-range studies of how Congress and other parts of government actually work broke new ground in a field that can be preoccupied with dry policy papers and voting records, died on April 21 at a nursing home in Rye. N.Y. He was 93.

His son Craig said the cause was presumed to be the coronavirus, though his father had not been tested.

Professor Fenno, who taught at the University of Rochester in upstate New York for 46 years, wrote 19 books, most focusing on the House or Senate. Some, including “The Making of a Senator: Dan Quayle” (1989) and “Learning to Legislate: The Senate Education of Arlen Specter” (1991), were about individual members. Others dealt with broader subjects. There was, for instance, “Going Home: Black Representatives and Their Constituents” (2003).

“Representation,” he wrote in that book, “is, at bottom, a home relationship, one that begins in the constituency and ends there.” And thus he visited the representatives he wrote about not just in Washington, but in their districts. 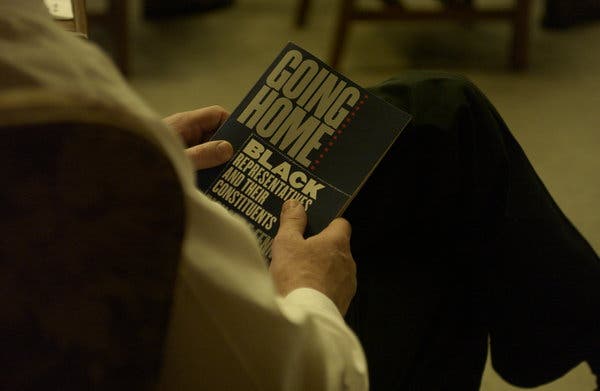 In “Going Home: Black Representatives and Their Constituents,” Professor Fenno wrote that “representation is, at bottom, a home relationship.”Credit…University of Rochester

Professor Fenno, who joined the University of Rochester faculty in 1957 and retired in 2003, called his research method “soaking and poking” — soaking up information and poking into details. It was a brand of scholarship he imparted to generations of students.

In 1968, an eventful year in American history, one of those students, Robert Sachs, came to him with an idea that Professor Fenno turned into a University of Rochester institution: the so-called Washington Semester, in which a student receives credit for working in the political sphere in the nation’s capital.

“Having heard Professor Fenno speak enthusiastically about shadowing members of Congress and senators in the course of his research,” Mr. Sachs said by email, “I thought maybe I could also learn this way, and get involved in the world of politics at the same time.”

Mr. Sachs, whose subsequent career included working on Capitol Hill and in the executive branch, was the first of many to take the Washington Semester, a relatively new idea at the time. Another was Heather A. Higginbottom, who became a deputy secretary of state in President Barack Obama’s administration.

“The Washington Semester Program was brilliant in its simplicity,” she said by email. “Fenno understood that to truly understand how policy is made — the dynamics that contribute to decision making — you needed to be up close and personal. A full-time internship on Capitol Hill for an entire semester provided a front-row seat for how legislation was made, and he made sure you were appreciating the various factors at play.”

The experience, she said, stayed with her.

“That one internship nearly 30 years ago completely informed my approach to politics and policy,” she said. “It grounded me in the pragmatism of policymaking.”

Richard Francis Fenno Jr. was born on Dec. 12, 1926, in Winchester, Mass. His father was in the coal business. His mother, Mary (Tredennick) Fenno, died when he was a young child.

After serving in the Navy during World War II, Professor Fenno graduated from Amherst College in 1948. He earned a Ph.D. in political science from Harvard in 1956 with a dissertation titled “The President’s Cabinet,” which became his first book, published in 1959.

“This book is at once a first-rate story of what makes the American political system tick (making it of interest to the general reader) and a perceptive study of the cabinet in recent years,” The Boston Globe wrote in a brief review.

Professor Fenno’s later books included “Home Style: House Members in Their Districts” (1978), in which he explored the individual styles that members of Congress affected in their home districts to help secure re-election. The book discussed what has come to be called “Fenno’s paradox”: the oddity that while most people vilify Congress as a whole, they have good opinions of their own representatives.

“It is easy for each congressman to explain to his supporters why he cannot be blamed for the performance of the collectivity,” Professor Fenno wrote, because “the internal diversity and decentralization of the institution provide such a wide variety of collegial villains to flay before one’s supporters at home.”

In “Congress at the Grassroots: Representational Change in the South, 1970-1998” (2000), he examined how two men, Jack Flynt and Mac Collins, represented Georgia congressional districts in different eras. The goal, as in his other portraits, was “to see them as flesh-and-blood, multidimensional individuals and not just as part of a widely condemned category of ‘politicians.’”

Among his students was Wendy Schiller, now chairwoman of the political science department at Brown University. “Fenno created the modern study of Congress,” she said in a statement, “with his pathbreaking scholarship on House and Senate members, legislating in the halls of Congress and campaigning on the streets of their districts.”

Professor Fenno married Nancy Davidson in 1948. She and his son survive him, along with a sister, Elizabeth Blucke, and two grandchildren. His older son, Mark, died in 2017.

Professor Fenno wrote about Congress during periods of bipartisan statesmanship exemplified by leaders like Senator Howard H. Baker Jr., Republican of Tennessee, and during more rancorous recent times. Throughout, he maintained a focus on how politicians interacted with constituents and won their long-term confidence.

One of his later books, “Congressional Travels: Places, Connections, and Authenticity” (2007), came about when he was struck by the national attention and bipartisan affection accorded to a relatively anonymous House member, John Joseph Moakley, a Massachusetts Democrat who served for 28 years, when he died in 2001. Mr. Moakley’s funeral drew 900 people.

“We could know all there was to know about Moakley’s life in Washington and not explain the attendance at his funeral,” he continued. “I will argue that he was not a memorable congressman but he was a memorable representative.”