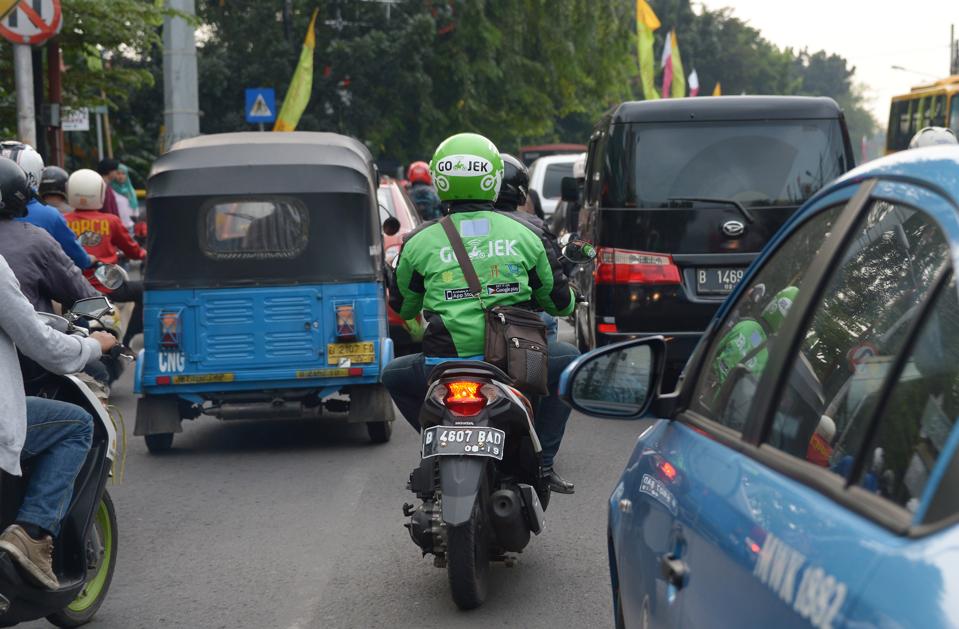 A motorcycle driver with Indonesian startup GoJek in traffic along a street in Jakarta, Indonesia.

Mobility technology is a vast emerging industry. It includes many different kinds of technologies and business models, targeted to different market needs. The common thread is that they all involve new ways of enabling people or goods to be moved around in vehicles.

Maybe you knew that. Surely you’re familiar with the most common forms of mobility tech already widely used, such as ride-hailing and car-sharing. But much more is being done and explored worldwide, so it becomes ever more valuable to stay attuned to what might be the next big things coming up.

At our venture capital firm in Singapore, we’re keeping an eye on mobility developments throughout Southeast Asia’s 10-country ASEAN region. We see some very promising work, often reflecting particular needs or tendencies in the region, and some news that may be noteworthy for various reasons. Here are status updates on eight key industry verticals:

Successful ASEAN companies such as Singapore-based Grab and Indonesia-based GoJek are not like Uber. Although mobility is at the heart of what they do, their model is to be a super app, with digital payment and a variety of other services offered around the ride service. GoJek offers well over a dozen, from GoTix for buying entertainment tickets to services that will send you a masseuse or a hair stylist, and now they’re also creating and streaming online content. While Grab isn’t as diverse, it is the first ASEAN decacorn—a private company valued at more than $10 billion.

Car-sharing in Southeast Asia operates on a model essentially the same as Zipcar’s for the U.S. and other countries. You use an app to rent and unlock a company-owned car for short-term use, etc. This is mostly a me-too vertical tech-wise, but one company on a growth trajectory is SoCar, a South Korean firm that expanded into Malaysia last year.

This is basically like car-sharing except that you get a two-wheeled vehicle, typically a bicycle. We’ve seen bike-sharing rise and fall in Southeast Asia. The service grew popular quickly because bicycles have advantages for the user: they’re cheaper to rent than cars and they can snake through traffic jams, which is important given the traffic jams in Asian cities. But with scale growth and heavy use, the costs to the company pile up. The bikes must be maintained and fixed more often; many have to be moved after use to put them where they’ll be needed next; and it becomes hard to operate cost-efficiently.

The current trend in micro mobility is renting electric scooters. I think we’ll see another rise and fall here because the scooters present similar problems. Making eco-friendly vehicles available on a massive scale is a concept that offers civic virtues but also creates civic hassles—regulators have cracked down on practices like riding the scooters on sidewalks—and achieving profitable growth in micro mobility is another matter entirely, for which the prospects don’t look good.

This is an exciting vertical, with prospects that look great for all parties. The value proposition: Southeast Asia is served by many independent truckers and small to mid-sized trucking company operators who find it difficult to optimize the use of their capacity. A truck might wait hours for only a partial load and then have to come back empty. Meanwhile, shippers have problems finding trucks to deliver their goods to the right places on time. The new logistics firms are tech-based intermediaries that can bring coordination and efficiency to this fragmented picture. For example, Logivan, in Vietnam, has a platform for matching shipments with available cargo space in trucks on the fly.

With solutions like that, everyone can get what they need quickly and the region’s economies can run smoother. See my previous Forbes column on logistics for more.

Here’s another area where new mobility entrants aim to coordinate and improve fragmented transportation systems. The shipments that need to be transported are people wanting to go from various points in one city to various points in another. In many parts of Southeast Asia, as well as in other still-developing regions of the world, the public transportation options are limited. There’s no light rail. Inter-city buses—which in some cases are bus-like vehicles, such as old army jeeps—may run fixed routes on which the pickup points aren’t convenient or even reachable for people who’d like to travel that day.

You might call the solution a form of bus-hailing: riders use their phones to signal where they need picking up. The drivers, on their phones, are directed where to go on each run, so in effect they’ve got dynamic routing. It’s also possible to set up a system that coordinates interchanges between one bus line and another. Companies to watch in this space include Tron and Bussr in Indonesia and Singapore-based RushOwl.

This vertical is a B2B play. As more vehicles are put on the roads for car-sharing, trucking and other uses, the result is a growing need for fast, cost-efficient maintenance and repair. Service shops, in turn, need prompt deliveries of parts and supplies. The overall picture is that of an ecosystem that needs supply chains to be streamlined and integrated with on-demand services. It presents a host of opportunities for new firms able to address crucial parts or all parts of the picture.

To many drivers in the U.S., “navigation and parking” means using Google Maps for directions and an app like SpotHero to find discounted spaces in parking garages. Southeast Asian markets are a bit different. The preferred navigation app tends to be Waze, which enables driver input for real-time traffic alerts (valuable in places where traffic problems are frequent) and for map construction. Road infrastructure is developing and changing; many addresses aren’t mapped.

As for parking, a principal problem in a lot of major cities is that large parking lots are literally manned. Human attendants register incoming drivers using paper and collect payments by hand. Digital ticketing and payment is the future, not so much for spot-finding as for making the whole parking process more efficient. Jukir.co in Indonesia and Sakay in The Philippines are among the firms active here.

I’ve saved the most glamorous vertical for last. As you may know from all the media attention, widespread L5 operation—fully autonomous in any environment—is still a long-term and uncertain prospect. But it should be noted that Singapore is becoming a key testbed. Western Singapore is a designated area. Test vehicles, including buses, must still have a safety driver at the wheel ready to take over; that precaution may not be eliminated for quite some time in open-street environments.

With other cities around the world already having hosted large-scale testing, such as Pittsburgh in the U.S., why is Singapore significant? To me, the answer is because it’s Singapore. The government is tech-friendly and supportive. Singapore is the most highly developed hub of tech research and enterprise in Southeast Asia generally. And, with this far-reaching form of mobility R&D added to the mix, it multiplies the possibilities for interaction and synergy with other forms of mobility technology.

Much of the current mobility work in the region is ASEAN-specific. Don’t be surprised if the future brings global impact.

With contributions by Vishnu Amble, a corporate VC investor focused on the intersection of global technology and infrastructure and a former corporate venture executive at German energy giant E.ON.