I was intrigued by Nintendo’s Ring Fit Adventure after seeing the hell it put our editor-in-chief Dana Wollman through. (It’s honestly hilarious seeing Dana, an accomplished marathon runner who can run circles around me, get wiped out by a “kids’ game.”) Ring Fit sounded like it could give me a decent workout in my cramped Brooklyn living room, and as a bonus, I could also keep an eye on Sophia while I pumped up. What better way to justify an $80 Switch accessory to my wife!

Setting up Ring Fit is a bit of a chore at first, but it gets easier the more you play. First, you have to attach a velcro strap to your left leg and slip in your left Joy-Con. Adjusting the fit is a bit annoying, as the strap tends to shimmy down your leg if it isn’t tight enough. I had to make it extra tight whenever I was wearing loose sweats. The right Joy-Con sits atop the Ring accessory for motion tracking. The Ring itself is surprisingly sturdy. Its soft covering makes it easy to hold, even when your hands start getting sweaty. And it’s flexible enough to handle being repeatedly squeezed and pulled.

Once I booted up the game, I designed a character, figured out the ideal difficulty setting and jumped into the main adventure. I was surprised to find that it’s basically an exercise role-playing game. You explore a world map, go through exercises in a variety of levels and eventually take on the bodybuilding dragon Dragaux at the end of every world. It’s all pretty basic for a video game, but it’s better than running through a dull assortment of virtual worlds like you’d find on pricey exercise equipment. There’s a lot more plot than I’d like, but the cartoony nature of the whole endeavor also kept Sophia interested. And that’s certainly preferable to her getting bored and demanding to see Elmo instead of her sweaty papa. 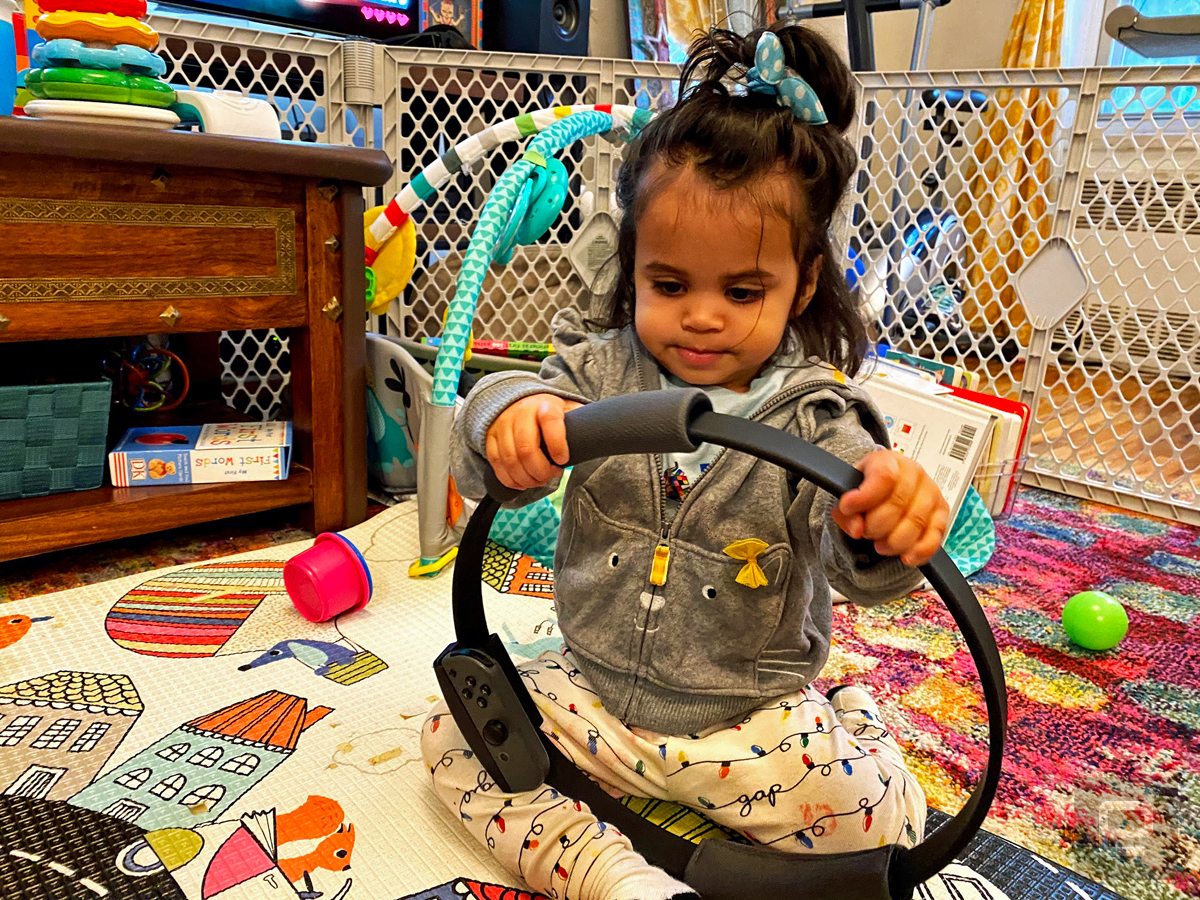 You’ll spend most of the game running in place (or squatting in place with its apartment-friendly quiet mode) and maneuvering through platformer obstacles. When you run into enemies, you have to complete a series of exercises to defeat them. I appreciated the variability of the workouts, which include things like squats, forward ring crunches, and leg lifts. They all hit different parts of your body, which makes Ring Fit a more effective workout than a single exercise machine. You can also choose the exercises you’d like to run through, so if you don’t feel like lying on the floor, you can avoid that entirely.

After my first session, I was almost completely wiped out. But I kept coming back, mostly because it was just a very efficient workout. Playing Ring Fit for half an hour gets me far sweatier than a two-mile run (which, sadly, takes me around the same time). And I could do it in the freezing winter without leaving the comfort of my home! Over time, I raised the game’s difficulty and was able to survive longer sessions. And while I never really got into the narrative, I appreciated that it was there to keep me motivated (and I’m sure it would be more fun for younger players).

Nintendo has been exploring exercise accessories for a long time, even from its very first console. The NES’s Power Pad was a fairly basic mat that never worked well, and it was also limited to a few titles like the dull World Class Track Meet. We got Wii Fit a few decades later, which relied on a balance board for yoga workouts, but that never sparked my interest. It was a hit for Nintendo though — selling nearly 44 million copies across its two Wii versions. There was also a Wii U sequel that took advantage of that console’s gamepad, but to be quite honest, I completely forgot that it existed.

While I’ve heard Wii Fit players enjoyed that game, it never sounded like a genuine workout — something that would make you sweat, lose your breath and feel like you’d actually put your body through hell. That’s something Ring Fit Adventure accomplishes in spades. It’s the ideal way to stay fit when you can’t stand the gym — or, just don’t want to leave home.