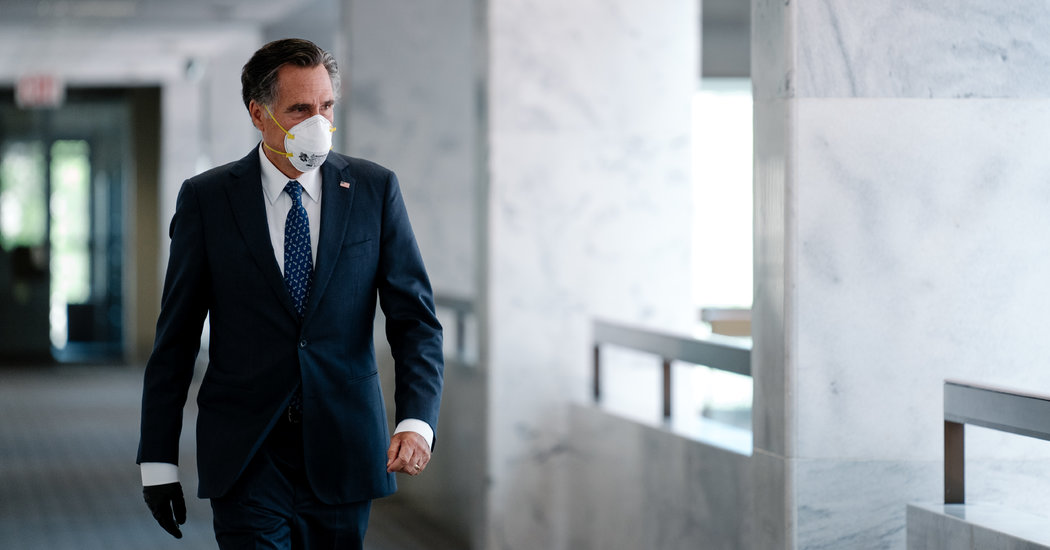 WASHINGTON — Senator Mitt Romney of Utah marched with demonstrators toward the White House on Sunday, appearing to be the first Republican senator to join the thousands across the country protesting the death of George Floyd in police custody.

Mr. Romney shared on Twitter a photograph of himself marching among the crowd, with the caption “Black Lives Matter.”

Mr. Romney, who marched with a group of Christians, told a Washington Post reporter that he had joined the protest to show that “we need to end violence and brutality, and to make sure that people understand that black lives matter.”

In joining the protest, Mr. Romney again found himself at odds with President Trump, who has pushed for a military response to the unrest, and standing apart from most of his party, as when he became the sole Republican senator to vote to remove Mr. Trump from office.

Republicans have largely been vocal in condemning the police officers who have been charged in connection with Mr. Floyd’s death, but few have publicly joined protesters marching across the county. Last week, Representative Will Hurd of Texas, the lone black Republican in the House, joined a peaceful protest, marching alongside Mr. Floyd’s family.

Democrats, by contrast, have made a point of supporting and participating in the rallies. Representative Joyce Beatty of Ohio was hit by pepper spray during a demonstration in her state late last month, while Speaker Nancy Pelosi of California made a trip last week to briefly speak to protesters gathered outside the Capitol.

Senator Ron Wyden of Oregon was seen on Saturday handing out water bottles to protesters marching through Washington, while Representative Alexandria Ocasio-Cortez of New York attended a protest and handed out masks to people walking by.

The visibility of politicians at the protests “does matter to a degree,” said Vania Brown, a protester from Maryland who had come to join the marches in Washington on Sunday. “But right now, I’m skeptical of any political party.”

The civil unrest around the country, coupled with renewed calls to address police brutality against people of color, has amplified pressure on lawmakers — particularly Republicans — to address not only police officers’ use of force, but also racial discrimination and the economic and social disparities that the coronavirus pandemic has further exposed.

Democrats are expected on Monday to unveil sweeping legislation that would make it easier to prosecute police misconduct and recover damages from officers found to have violated civil rights. In the coming weeks, the Senate and the House both plan to hold hearings on proposals to improve policing and counter racial discrimination.

Compared with previous instances in which black men have died after police officers have used excessive force, Republicans have been almost uniformly outraged at the case of Mr. Floyd, who died after a police officer knelt on his neck for nearly nine minutes.

The administration’s move to crack down on demonstrators prompted a rare break with Mr. Trump, as some Republicans moved to distance themselves from the president’s threats to send the military to confront protesters. Senator Lisa Murkowski, Republican of Alaska, went so far as to endorse scathing criticism from Jim Mattis, the former defense secretary, of Mr. Trump’s handling of the protests.

Among Republicans, Mr. Romney in particular has been vocal in condemning the circumstances surrounding Mr. Floyd’s death, saying last month that “the George Floyd murder is abhorrent.”

He has also reflected on how his father, George Romney, participated in a civil rights march in the 1960s as governor of Michigan, quoting him on Twitter and sharing a photo of him at the protest in the 1960s in Detroit.

“Force alone will not eliminate riots,” Mr. Romney quoted his father saying. “We must eliminate the problems from which they stem.”

April Cole, a Capitol Hill resident who had been protesting since noon with her 21-year-old daughter, dismissed Mr. Romney’s joining the march as a political stunt.

“Why does it take us to lose someone for them to show up?” she asked. “We need change.”

But Monique, a Washington native marching near the White House who declined to identify herself further, said Mr. Romney was setting an example for other policymakers, calling him a decent man.

Despite protests early last week that were met with flash-bang explosions, chemical irritants and an aggressive use of military helicopters, a steady stream of people have persisted in marching through the nation’s capitol.

On Sunday, locals were barbecuing in front of the historic St. John’s Episcopal Church, where just days earlier the police had brutally cleared protesters to allow Mr. Trump to pose for photographs.