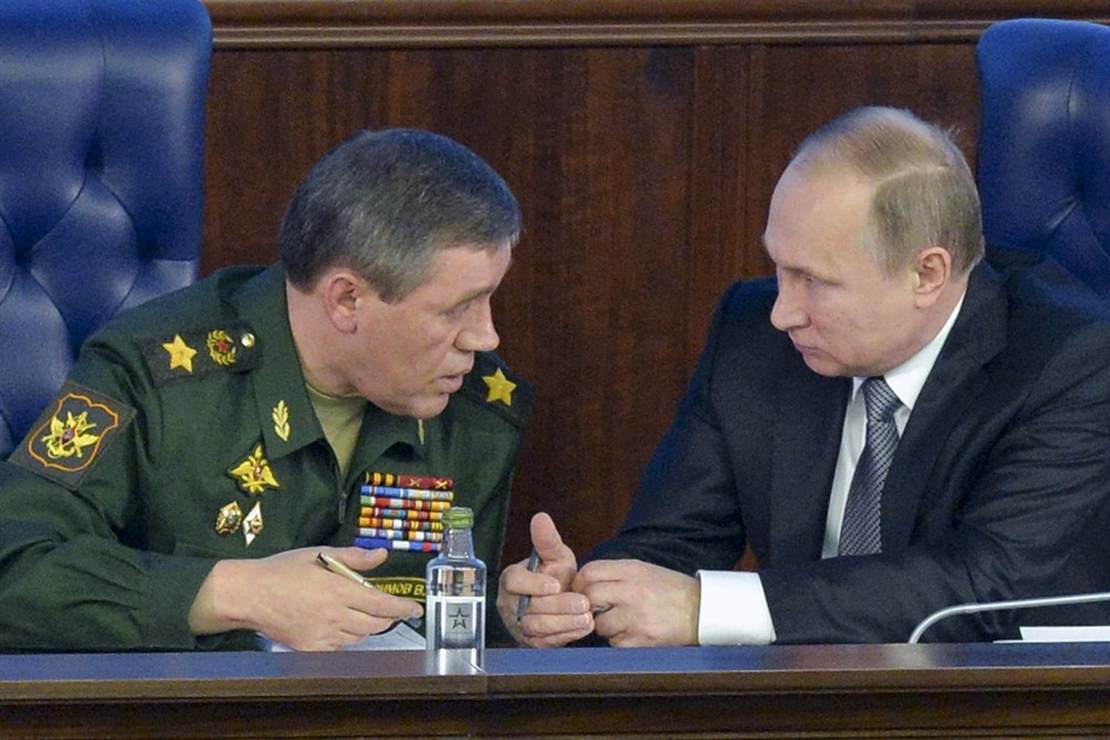 If you missed it on Friday, now’s the time to read this post about the rumors that Putin has sent his top man, Valery Gersasimov, to Izyum to personally oversee the campaign in the Donbas. Gerasimov is chief of staff, the highest ranking officer in the Russia military. If it’s true that he’s in the field, it proves how intent Putin is on victory. Every member of the Russian military up to the tippy top is now committed to this fight.

Soon every military-aged man in Russia might be committed too.

Needless to say, taking out Gerasimov would be a stupendous victory for Ukraine, decapitating the Russian military in one blow and wrecking Moscow’s hope that having the chief of staff in command might steady operations in the east. Taking him out before May 9, “Victory Day” in Russia, would make it even more stupendous, humiliating Putin at a moment when he’s eager to claim some sort of triumph in Ukraine.

If you believe the rumors floating around today, they came thisclose yesterday to succeeding.

UPDATE – Yesterday’s #Ukraine attack on the Rus. HQ in #Izium was designed to liquidate the high-value target – chief of Gen. Staff of RAF Gen. Valeriy Gerasimov. The Kremlin sent him to get a victory for the May 9 parade. Gerasimov was close to the blast but wounded. [Thread⬇️] pic.twitter.com/vYgZQRoML3

Just propaganda or something more? I haven’t seen any confirmation by the press, but Arsen Avakov is also spreading the news on Facebook. He spent seven years as Ukraine’s minister of internal affairs before leaving the job in 2021 so he may well have sources who are in a position to know. According to an English translation of Avakov’s Facebook post, Gerasimov suffered some sort of injury to his right side — presumably from shrapnel — but managed to avoid any broken bones.

Notably, there was a major Ukrainian attack in Izyum yesterday that reportedly killed more than 100 Russian troops, many of them officers. At least one Russian general is said to be among the KIA.

[2] Yesterday, at the moment of the #Ukraine attack more than 40 high-ranked Russian military officers gathered in the HQs in #Izium. Reportedly, up to 20 of them are confirmed killed incl. Gen. Andrey Simonov, a commander of electronic warfare forces of the West district. pic.twitter.com/iBDIhHuvvi

⚡️We received confirmation of yesterday’s explosion in #Izium (Eastern 🇺🇦) near 🇷🇺 headquarters. It is known that 🇷🇺 Head of General Staff Gerasimov was there to lead attack on #Sloviansk.

Large number of casualties among senior 🇷🇺 officers has been confirmed.#UkraineRussianWar

Simonov and 100 others may have been collateral damage in a strike aimed at Gerasimov. Which raises a question, assuming any of this is true: How did the Ukrainians know where he was? His location must be a tightly held secret within the Russian military.

One possibility is that they just got lucky. Gerasimov may not have been the target, merely someone who happened to be in the wrong place at the wrong time. From the Kyiv Post:

National Guard units reported on April 30 that they spotted a field command post of the Russian 2nd Army in the area and passed the coordinates on to the military whose artillery fired on the positions. More than 30 Russian armored vehicles, including tanks, were reportedly struck in the rocket salvos.

Presidential adviser Oleksiy Arestovych said in an interview published on YouTube that some 100 Russian servicemen were killed, including Simonov…

On the same day, Ukraine’s military announced that Ukrainian counterattacks resulted in the liberation of four villages outside of Kharkiv, the country’s second-largest city.

The other possibility is that the Ukrainians did indeed know Gerasimov’s location despite Russia’s best efforts to conceal it. If so, we can guess which little birdie whispered it in their ears. Hoo boy.

This footage allegedly shows the Izyum attack. The first artillery burst looks like a direct hit on the target:

It’s yet to be confirmed by Russian sources but it’s significant they named a specific general. pic.twitter.com/bohq0iX56G

Yesterday WaPo published a prescient story about why artillery shipments from the west are so important to Ukraine. One reason is that it gives the Ukrainians a way to neutralize Russia’s own artillery in a war where air power has been scarce on both sides. But it also forces Russian units to keep moving in the field. Hunker down at one location like a command post and you’re apt to have an unpleasant surprise drop down the chimney:

After an artillery unit attacks an adversary, it needs to keep moving, [former Gen. George] Flynn said. “Once you get into a counter-battery fight, it’s shoot and scoot,” he added. “You don’t stick around and let yourself get targeted.”…

“The problem” that Ukraine and its Western allies would “like to impose on the Russians,” [analyst Scott Boston] said, “is for them to never have confidence that a headquarters, or a key ammunition dump, or an important cluster of firing platforms, can ever be stationary for very long.”

Or did he? Maybe the rumors this morning really are just hype:

Planes belonging to the Russian Ministry of Defense and Rosgvardia (RF-85042 and RF-85136) were spotted in Belgorod close to the Ukrainian border yesterday.

This could be an indirect confirmation with persistent rumors that Gerasimov was present in occupied Izyum, at the main Russian line of attack in the Donbas and Ukrainian claims that a command post was destroyed in the area.

Gerasimov was reportedly safe and sound.

The reports aren’t strictly contradictory. Conceivably Gerasimov was at the command post, was only very lightly wounded, and has now been evacuated so as not to give the Ukrainians a second chance to take him out before May 9.

The attack in Izyum wasn’t the only instance of Ukraine going on offense yesterday, by the way. Belgorod, a Russian city near the Ukrainian border, has experienced several mysterious explosions over the past month. It just happened again:

Another large explosion/fire reported in Belgorod, north of Kharkiv, inside the borders of Russia.🔥 pic.twitter.com/oHnKK1yfGz

Supposedly helicopters were seen in the area 30 minutes before the explosion. I’m guessing we’ll see more cross-border attacks by Ukraine this coming week especially as part of the effort to embarrass Putin before “Victory Day.” It’s harder for him to convince the world that the war is going great if things keep blowing up in his cities.