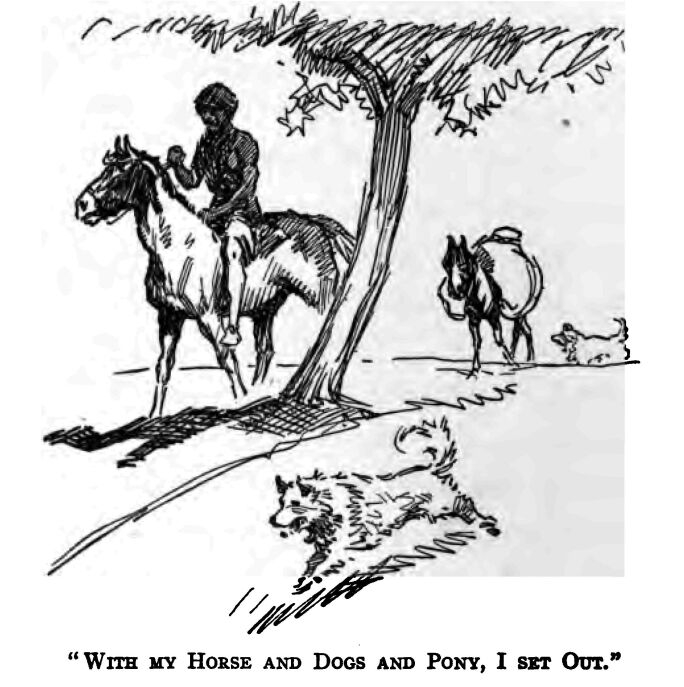 Welcome to Part Six of our latest audio entertainment – a bit of escapism all about a once civilized society descending into brutish barbarism and mob rule. So nothing to do with our world then. Instead, it’s The Scarlet Plague by Jack London.

In tonight’s episode, our narrator adjusts to a new post-civilized world:

“On the third day, putting what small store of tinned provisions I possessed on the pony’s back, I started on across a very lonely land. Not a live man, woman, or child, did I encounter, though the dead were everywhere. Food, however, was abundant. The land then was not as it is now. It was all cleared of trees and brush, and it was cultivated. The food for millions of mouths was growing, ripening, and going to waste. From the fields and orchards I gathered vegetables, fruits, and berries. Around the deserted farmhouses I got eggs and caught chickens. And frequently I found supplies of tinned provisions in the store-rooms.

“A strange thing was what was taking place with all the domestic animals. Everywhere they were going wild and preying on one another. The chickens and ducks were the first to be destroyed, while the pigs were the first to go wild, followed by the cats. Nor were the dogs long in adapting themselves to the changed conditions. There was a veritable plague of dogs. They devoured the corpses, barked and howled during the nights, and in the daytime slunk about in the distance. As the time went by, I noticed a change in their behavior. At first they were apart from one another, very suspicious and very prone to fight. But after a not very long while they began to come together and run in packs. The dog, you see, always was a social animal, and this was true before ever he came to be domesticated by man…”

“But the cats don’t run in packs, Granser,” Hoo-Hoo objected.

“The cat was never a social animal. As one writer in the nineteenth century said, the cat walks by himself. He always walked by himself, from before the time he was tamed by man, down through the long ages of domestication, to to-day when once more he is wild.’

Members of The Mark Steyn Club can hear Part Six of our tale simply by clicking here and logging-in. Earlier episodes can be found here.

Tomorrow, Saturday, we’ll have both our weekly instalment of Mark Steyn’s Passing Parade and the conclusion of The Scarlet Plague.

If you’re minded to join us in The Mark Steyn Club, you’re more than welcome. You can find more information here. And, if you have a chum you think might enjoy Tales for Our Time (so far, we’ve covered Conan Doyle, Baroness Orczy, Dickens, Forster, Conrad, Kipling, Kafka, Gogol, P G Wodehouse, Scott Fitzgerald, Robert Louis Stevenson and more), we’ve introduced a special Gift Membership that lets you sign up a pal for the Steyn Club. You’ll find more details here. Oh, and don’t forget, over at the Steyn store, our Steynamite Special Offers on books, CDs, and much more.