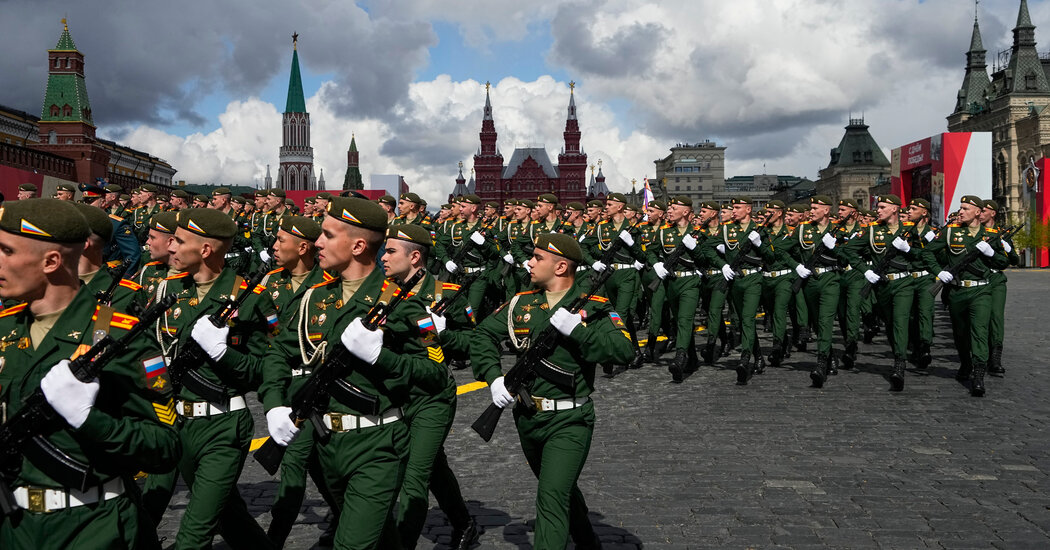 In a suburb of Aachen, in the west of Germany, Alex Ebert, 11, was on the bus back from school, his mother said, when four boys told him that he was killing Ukrainian children.

One of them, who he told her had pushed him the week before and called him a slur used for Russians, slammed Alex’s head into the window and kicked him in the stomach and back. Alex, who speaks Russian because his parents are from Kazakhstan, got out at a bus stop and sat on the ground until strangers in a car stopped and picked him up.

“He was crying and hurting,” said his mother, Svetlana Ebert. “He doesn’t understand what he has to do with it.”

President Vladimir V. Putin’s invasion has killed hundreds of Ukrainian children, orphaned many more and displaced millions, and wrecked homes and schools. But it has also crept into the lives of Russian-speaking children across Europe, who have found themselves paying for Mr. Putin’s aggression in humiliation, harassment and bullying — another perverse effect of a war that is overwhelmingly affecting the innocent.

“This problem is growing every day,” said Carsten Stahl, Germany’s most prominent anti-bullying activist, who said he had received scores of reports of bullying of Russian-speaking students. “I’m very angry and very ashamed.”

In classrooms around Europe, children bewildered by the war have asked questions and gotten answers. But as their governments have sought to isolate Russia both culturally and politically, they have also poured out their fears, and sometimes looked for culprits or mimicked adults’ hostility, with the risk of creating new breeding grounds for violence and intimidation in a continent that is once again enduring war.

“If we put it in their head that it is OK to hate and bully, it stays for a very long time,” Mr. Stahl said. “Children are the mirror of our society.”

World events have often supplied excuses for bullying. The Covid-19 pandemic brought a wave of harassment for Asian children, and in 2016, after a series of Islamic State terrorist attacks, Muslim children reported an increase in bullying. Now, Mr. Stahl said, distress over the war in Ukraine has added new targets for the kind of vindictive behavior that can lead children to avoid school and, in some cases, result in depression and suicidal thoughts.

In Harsefeld, a town outside Hamburg, Anastasia Makisson, 13, who is Russian-German, received several anonymous notes in school calling her a Nazi and urging her to go back to Russia to “drink vodka with Putin.”

She said students had also come up to her and shouted, “Putin!” Anastasia liked school, but since the latest notes appeared in April, she has not gone back out of fear. “I’m scared someone could hit me,” she said in an interview. “Everybody stares at me. It’s as if they’re thinking, ‘Eww, she’s Russian.’”

Her father, Ilya Makisson, said the school had promised to investigate but had not acted so far; the school did not respond to a request for comment.

About a week after Russia invaded Ukraine, Elisa Spadoni, 13, who is Russian-Italian, wrapped up her homework at her house in central Italy and checked her class WhatsApp group. In the chat, one classmate called her “daughter of Putin.” Another message read, “You might as well die.”

When the girl asked her classmates to stop, one boy replied, “We will stop once you will stop throwing missiles on Ukraine.” He also wrote: “Tomorrow I will beat her up.”

Elisa, usually an enthusiastic, dedicated student, told her mother she no longer wanted to go to school.

“I was ashamed,” said Elisa. “I wished I didn’t have half-Russian origins.”

When her father reported the harassment to her teacher, she discussed the issue in class, Elisa said. But her mother said that Elisa waited several days before opening up about the messages; her mother learned only from classmates that she had been crying at school.

Like Elisa, many of the Russian-speaking children who have been targeted have tried to keep it quiet; in some cases, out of shame, as often happens with bullying. Among those who spoke up, some parents feared that discussing incidents could result in more trouble for their children, or make them seem supportive of the war.

But organizations and some authorities around Europe have still sensed a problem.

“Classmates — whatever their nationality — are not to blame for the aggressor’s actions,” the Lithuanian education minister, Jurgita Siugzdiniene, said in a statement to schools.

“Let’s leave the kids out of this,” Gianmarco Medusei, the president of the regional council in the northern Italian region of Liguria, said on television. The charity Save the Children in Denmark also expressed concerns. “No child should be bullied for what adults choose to do,” it said in a statement.

Anna-Mariia Kraevskaia Hansen, 14, said that in her small school in the Danish city of Horsens some of her classmates started pointing at her in the corridors, saying, “Look at this spy.”

Some children told her that she should go home to Russia, and others that she might throw bombs at them.

Her mother, Nelli Kraevskaia Hansen, said that Anna-Mariia had trouble sleeping and took some sick days from school because she felt drained.

Morten Tido Madsen, one of Anna-Mariia’s teachers, took some students aside and asked them why they said mean things to her or others. Some said “to be funny and smart,” or that they “did not care.” Mr. Madsen asked if they would like to receive similar comments and said he knew that they cared because they are kind people who don’t want to hurt others.

Sometimes Mr. Madsen asked Anna-Mariia to join them and share how she felt about the comments.

“They see she is Anna-Mariia, she is a student, not a country,” he said. “She doesn’t have to apologize for the actions of Putin.”

As the case of Alex, the boy from Aachen, shows, bullying and harassment affect not only Russian children, because many people speak Russian in former Soviet republics like Estonia, Kazakhstan and Ukraine itself. Russian is the fifth most widely spoken foreign language in Europe, according to a European Commission report.

In London, Yaroslav Fedorov, 11, who is Russian, and a Ukrainian friend were leaving school when three older boys stopped them. “They said to us, ‘Why are you speaking Russian? We’ll beat you up,’” he said in a phone call. The head teacher spoke with the older boys after he complained, Yaroslav said. The school declined to comment.

Karolina Krilova, 14, originally from Estonia, was standing with a friend on an empty train platform in Vantaa, Finland, when two teenage boys approached them and accused them of supporting the war and loving Mr. Putin, then threw empty energy drink cans at them.

In Germany, Alex’s mother, Ms. Ebert, said that after she exerted considerable pressure, the school scheduled a meeting with the boy who kicked and slammed Alex, and his parents, where he apologized. The boys who shouted abuse, and their parents, were later called to similar meetings. The school did not respond to requests for comment.

At the hospital after the attack on the school bus, a doctor diagnosed Alex with syncope (or passing out), a headache, very strong stomach pains and nausea, according to a medical document shared with The New York Times.

“At first I felt hatred toward this boy who beat him up,” Ms. Ebert said. “But I understood a week later, this is a child, too. He’s not guilty.”