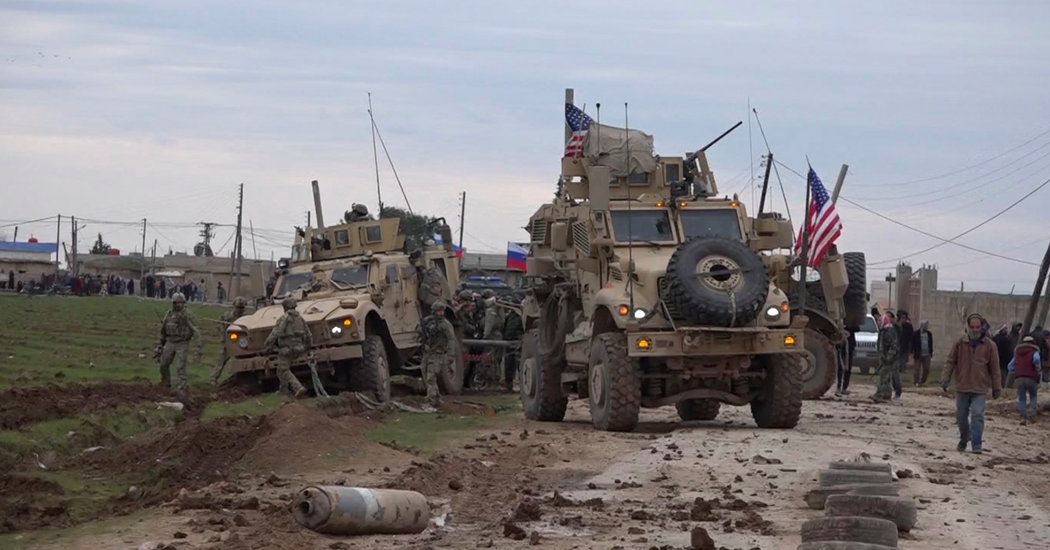 WASHINGTON — Russia is intensifying a pressure campaign on U.S. military forces in northeastern Syria following the American withdrawal from much of that area ahead of a Turkish cross-border offensive last fall, American military and diplomatic officials say.

Russian military personnel have increasingly had run-ins with U.S. troops on highways in the region, breaking agreements between the two countries to steer clear of each other. Russian helicopters are flying closer to American troops. And on Wednesday, a U.S.-led convoy returned fire after it came under attack near a checkpoint manned by forces loyal to President Bashar al-Assad of Syria, who are backed by Russia.

American officials say these actions by Russian personnel and their Syrian allies are devised to present a constant set of challenges, probes and encroachments to slowly create new facts on the ground and make the U.S. military presence there more tenuous. About 500 American troops remain deployed in Syria with a mission to protect oil fields and help fight remnants of the Islamic State.

“These are not daily occurrences but they have been increasing in number, and thus is troubling,” James F. Jeffrey, the top American diplomat overseeing Syria issues, told reporters last week.

The confrontations risk escalating to a significant hostile encounter between Washington and Moscow in the country’s northeast, even as Russian-backed Syrian government troops have stepped up an offensive against rebel enclaves in Idlib in Syria’s northwest.

“We know they’re pressing,” Vice Adm. Tim Szymanski, a Navy SEAL who is deputy head of the military’s Special Operations Command, said in an interview. He echoed the assessment of other government and independent analysts who say the Russians will continue to seek an advantage in the northeast, even in areas patrolled by U.S. and Syrian Kurdish allies and where Russian personnel are not supposed to go.

On Wednesday, a convoy led by U.S. Army soldiers was stopped at a Syrian army checkpoint east of the city of Qamishli. Photographs and video from the scene circulating on social media, and later confirmed by the Pentagon, showed armored vehicles with U.S., Russian and Syrian flags next to one another. Some residents pelted the American vehicles with stones. Another resident dumped a bucket of dirt on the back of one vehicle. Another tried to light some of the vehicles on fire, according to a Defense Department official.

A brief firefight broke out, with one Syrian man killed. No Americans were killed, but one was slightly injured after receiving hand lacerations in the ensuing chaos, the official said.

“After coalition troops issued a series of warnings and de-escalation attempts, the patrol came under small-arms fire from unknown individuals,” said Col. Myles Caggins, a spokesman for the U.S.-led coalition in Baghdad that oversees operation in northeastern Syria. “In self-defense, coalition troops returned fire.”

A Russian defense ministry official said the arrival of Russian troops at the scene made it “possible to prevent further escalation of the conflict,” according to the Tass news agency, a claim that American officials later dismissed.

“We have American soldiers with an ill-defined mission in Syria (‘protect the oil’) after abandoning ¾ of once stable territory on Trump’s orders, now forced to navigate roads controlled by Russian and Syrian regime forces,” Mr. McGurk said on Twitter. “Too much to ask of our brave warriors.”

Last October, Mr. Trump abruptly ordered a complete withdrawal of the 1,000 American troops helping Syrian Kurdish forces combat pockets of Islamic State fighters, opening the way to a bloody Turkish cross-border offensive. Mr. Trump then, just as abruptly, reversed himself and allowed about 500 troops to remain in a much smaller operating zone.

Ever since then, American military officials say, Russia and its Syrian allies have been pushing the boundaries of agreements that Russia and the United States reached on whose armies would patrol which territory. The two sides established special communications channels to avoid clashing with each other on the ground, a process the Pentagon calls deconfliction.

But Mr. Trump has signaled very clearly his skepticism about the Syria mission, and Moscow perceives that as an invaluable opportunity, analysts say.

“A full-on Russian confrontation with American troops would risk encouraging Trump to lash out and double-down, but if Russia and its local allies can sustain a constant, low-level campaign of challenges in which dynamics are manipulated and red lines blurred, then who knows what might happen,” said Charles R. Lister, a senior fellow at the Middle East Institute.

“A few random, unpredictable clashes or run-ins, like the one near Qamishli, could easily get onto Trump’s radar and pave a path towards a full American withdrawal,” Mr. Lister said.

American military officers and diplomats point to an array of troubling developments in recent weeks. The Russians have swamped the deconfliction channel, set up for direct communications between American and Russian forces to avoid confrontations, with requests to operate in American-patrolled areas; the Russians then ignored American objections and traveled there anyway. American patrols have then blockaded roads, forcing these Russian patrols to turn around. The Russians have also conducted ground patrols on their own when they were supposed to do joint Russian-Turkish patrols in areas Turkey controlled after its incursion.

The prevalence of Syrian and Russian forces is an issue not just on the ground, but also in the air, where the large number of reconnaissance drones and other aircraft has eroded American air superiority, one American defense official said.

American officials voice fears that these run-ins could escalate after the Idlib campaign is over, and Russia and Mr. Assad’s government turn their full attention to the northeast.

American officials had predicted these potentially dangerous standoffs with the Russians and their Syrian allies would escalate. In an interview last November, soon after the Turkish incursion, Gen. Kenneth F. McKenzie, the head of the military’s Central Command, said that protecting the oil fields might ultimately draw a larger challenge from Syrian Army troops than from the Islamic State.

“I’d expect at some point the regime will come forward to that ground,” General McKenzie said.

The last time pro-Syrian government forces and allied Russian mercenaries threatened American troops near the oil fields, in February 2018, the United States unleashed an artillery and aerial bombardment that left 200 to 300 of the attacking fighters dead.

After American and Russian commanders agreed in late 2017 to fly on opposite sides of a 45-mile stretch of the Euphrates to prevent accidents in eastern Syria’s increasingly congested skies, Russian warplanes violated that deal half a dozen times a day, American commanders said.

The Americans said it was an effort by Moscow to test the United States’ resolve, bait U.S. Air Force pilots into reacting rashly, and help the Syrian army solidify territorial gains ahead of any diplomatic talks aimed at resolving the country’s civil war.