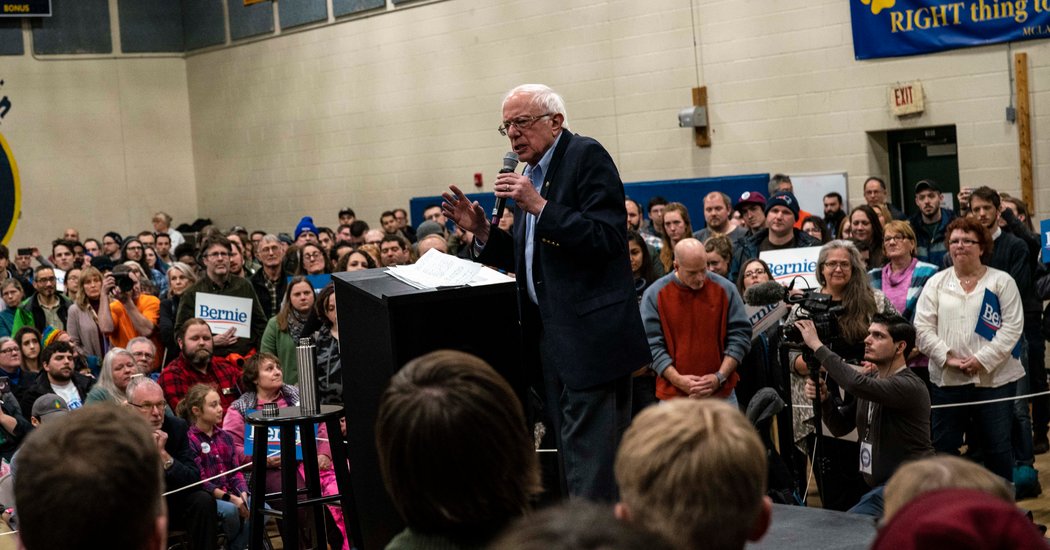 EXETER, N.H. — Senator Bernie Sanders had just finished addressing supporters here Saturday afternoon, reprising his stump speech standards about raising the minimum wage, addressing climate change and implementing universal health care when a voter raised her hand to ask about a topic he didn’t mention but which had increasingly loomed over the race.

Mr. Sanders, of Vermont, briefly criticized the news media — which he said “often wants and exaggerates conflict” — before noting he had not targeted any of his rivals in his remarks.

“The best thing for all the Democratic candidates,” he said, was to “focus on issues of the working families of America.”

Yet after Mr. Sanders and Ms. Warren, of Massachusetts, angrily accused one another of lying about whether he had told her a woman could not defeat President Trump, and with just over two weeks until the Feb. 3 Iowa caucuses, supporters of the two progressives and erstwhile political allies remained upset.

“I was really disappointed,” said Jayne Cousins, an ardent Sanders supporter who attended his rally here. She predicted Ms. Warren’s claim, which Mr. Sanders denies, would adversely impact Ms. Warren because, she said, it was so implausible.

But when Ms. Warren returned to Iowa for the first time since her confrontation with Mr. Sanders on the debate stage in Des Moines, it was not difficult to find voters who said the opposite: that Mr. Sanders would pay a price for what they saw as his insensitivity on one of the most fraught issues in the primary.

“I have a lot of friends who said they won’t vote for him,” because of the incident, said David Jansen, who attended Ms. Warren’s town-hall-style meeting in Newton, Iowa, on Friday.

The tensions between the two candidates began a week ago, after a report that Mr. Sanders’s campaign had told its field organizers to characterize Ms. Warren’s base as affluent and elite, which caused the Massachusetts senator to say she was “disappointed” in Mr. Sanders.

The next step was more drastic: Ms. Warren said in a statement that during a private meeting in 2018 between the two senators, Mr. Sanders told her that a woman could not win the presidency. Mr. Sanders vehemently denied he had said that, which prompted Ms. Warren to confront him after the debate.

It is too soon to know the political fallout, but it comes as Mr. Sanders appears to be gaining strength and Ms. Warren is struggling to reignite her campaign. If those trajectories are accelerated or reversed, it may be traced back to the moment their longstanding nonaggression pact fell apart.

The candidates themselves are attempting to douse the flames.

Ms. Warren repeatedly declined to address the rift with Mr. Sanders when she spoke to reporters after her Iowa event Friday. And Mr. Sanders declined to answer a question from a reporter Saturday in New Hampshire before alluding only glancingly to the matter when the voter brought it up

Yet he is clearly taking steps to inoculate himself with women voters. Recognizing the risk the accusation poses, his campaign began airing an ad in Iowa and New Hampshire that highlights his support of women’s rights.

“Bernie Sanders is on our side, and he always has been,” a female narrator says in the commercial, trumpeting the senator’s support for abortion rights, for family leave guarantees and for equal-pay legislation.

In New Hampshire, he added a stop at the Women’s March in Portsmouth to his schedule and was introduced there by the author Naomi Klein. In Exeter, Mr. Sanders saluted female leaders of the resistance to Mr. Trump and added a promise to his stump speech.

“I want to thank the women of this country for leading the opposition to Trump at every level,” he said. He then vowed: “I will never nominate any individual to the Supreme Court or the federal courts who is not 100 percent pro Roe v. Wade.”

Ms. Warren did not add new remarks about gender in her trip to Iowa, but one of her campaign co-chairs, Representative Deb Haaland of New Mexico, introduced her with a nod toward her history-making potential.

Ms. Warren’s supporters in Iowa said the episode with Mr. Sanders, which had prompted his supporters to hurl attacks at her online and even refer to her with a snake emoji, was all too reminiscent of his treatment of Hillary Clinton in 2016.

At a Planned Parenthood event with Ms. Warren in Des Moines Saturday, two women mentioned the back and forth with Mr. Sanders and one said that she was getting flashbacks to the last presidential race. One woman asked Ms. Warren what her plans were for “shutting him down and winning his supporters over.” She said Ms. Warren’s disagreement with Mr. Sanders gave her “PTSD” to Mr. Sanders’s feud with Mrs. Clinton in 2016.

“I believe you 100 percent because I looked at you and I looked at him and I thought, ‘He did that,’” the woman told Ms. Warren. “I know Bernie Sanders did those things to you.”

“So let me start by saying, Bernie and I have been friends for a long time.,” she said. “We fight for the same issues. We’ve been allies in these panels long before I ever got into politics. That’s all I want to say about that topic.”

Ms. Hawk and her husband, Ron, who are both leaning toward caucusing for Ms. Warren, even said they would rather vote for the moderate Mr. Biden than back Mr. Sanders.

“I kind of blame him for Trump,” Ms. Hawk said. “He didn’t have his followers to vote and talk about Hillary in a positive way.”

Mr. Sanders’s supporters fervently deny that charge, pointing to all of the events he did on behalf of Mrs. Clinton in 2016. But they are now more upset at what they see as the betrayal of Ms. Warren. They are quick to point out that she never endorsed Mr. Sanders when he ran for president four years ago.

Taking refuge from the 16-degree cold in a Portsmouth coffee shop after the Women’s March, Ashley Kerhig, a painter from Kittery, Maine, said it was clear that Ms. Warren was orchestrating a smear campaign against Mr. Sanders.

“I don’t trust Elizabeth Warren,” said Ms. Kerhig, calling the back-and-forth a “set up” by the Massachusetts senator.

“She didn’t shake his hand and it was right in front of the cameras,” she said.

As for who is being honest, Mr. Sanders’s supporters overwhelmingly argued that Ms. Warren was distorting his remarks while those more inclined to Ms. Warren said they believed her.

But Democrats still deciding between the two just seem to want the sniping to end.

“I hope it blows over so it doesn’t affect either of them,” said Katherine Szuplat, a librarian in Dover, N.H., who also came to the Women’s March in Portsmouth. She said she was worried the rift could hurt both of them, and would help one of the moderate candidates in the race.