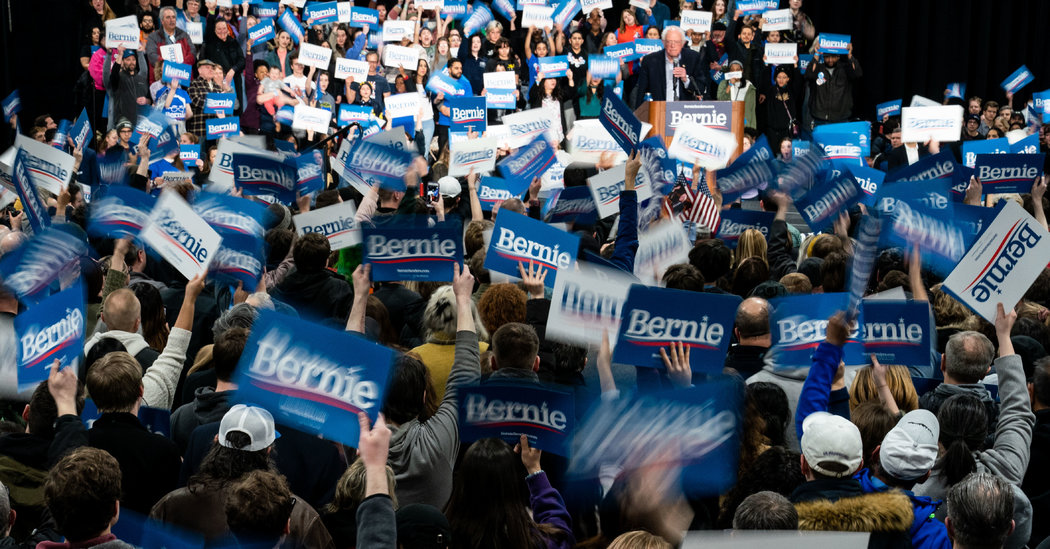 SPRINGFIELD, Mass. — Bernie Sanders landed in Elizabeth Warren’s home state on Friday night, stood before thousands of screaming fans and asked them to help him win it.

As Ms. Warren was campaigning hundreds of miles away in South Carolina, where voting in the state’s primary began Saturday morning, Mr. Sanders had departed for parts north, hoping to extinguish her candidacy — or at least deliver a stinging embarrassment.

With the race entering a critical phase, Mr. Sanders is looking ahead to big states like California and Texas to amass an insurmountable delegate lead next Tuesday, while also setting his sights on less glossy, but still delegate-rich states including Virginia and North Carolina.

Yet a victory in Massachusetts, where Ms. Warren was first elected to the Senate in 2012 and re-elected in 2018, would not only give Mr. Sanders, the senator from neighboring Vermont, a significant share of the state’s 91 delegates but also inflict a symbolic blow to his closest ideological rival, as he pushes to categorically establish himself as the standard-bearer of the liberal left.

His rally in Springfield, and one in Boston on Saturday, are clear signs of his take-no-prisoners approach to his 2020 campaign. If that means beating Ms. Warren in Massachusetts, so be it.

“People don’t get their own states walled off for them,” said Jeff Weaver, a top strategist to Mr. Sanders.

Mr. Sanders has similarly added an event in Minnesota, the home state of Senator Amy Klobuchar, though her continued presence in the race is largely viewed as bleeding votes from other Sanders rivals rather than hurting him.

In a show of force Mr. Sanders rallied more than 13,000 people at the Boston Common on Saturday, according to his campaign. Referring to himself as “a U.S. Senator from your neighbor up north,” he expressed confidence in his ability to win Massachusetts.

“If we have the largest voter turnout in the history of Massachusetts primary — we can win here in Massachusetts, we can win the Democratic nomination,” he said. He did not mention the South Carolina primary.

So far, Mr. Sanders has advertised more heavily than Ms. Warren in her home state, deployed about a dozen staff members, set up four field offices, had 1,500 volunteer events and organized canvassers to knock on 50,000 doors just last weekend, according to his campaign. Mr. Sanders even used his Twitter platform to amplify a local zoning and redevelopment fight in East Boston this week.

In an apparent nod to the urgency of the situation, a super PAC supporting Ms. Warren announced late Thursday that it was buying up television time in Boston to give her a last-minute boost.

Ms. Warren has declined several times to call Massachusetts a must-win state — twice in a CNN town hall on Wednesday and again Saturday morning while campaigning in Columbia, S.C. Asked about Mr. Sanders’s presence in the state, she told reporters: “I know that Massachusetts is a very progressive state and progressive ideas are very popular. And so I’m sure that’s why Bernie is campaigning there.”

In Springfield, Mr. Sanders’s supporters were relishing the possibility of a win. Lindsay Sabadosa, a state representative in Massachusetts and co-chairwoman of the Sanders campaign in the state, almost mockingly appropriated some of Ms. Warren’s own rhetoric as she introduced him, saying she was “counting down the days until election night.”

There has been limited polling in Massachusetts. One survey, from the University of Massachusetts Lowell, taken after the New Hampshire primary but before Mr. Sanders won Nevada, showed a statistical dead heat, with Mr. Sanders at 21 percent and Ms. Warren at 20 percent. Another, from the radio station WBUR, showed Mr. Sanders opening a lead, with 25 percent to Ms. Warren’s 17 percent.

Advisers to Ms. Warren, who has no plans to appear in Massachusetts until voting on Super Tuesday, said that her time and money is best spent elsewhere, especially as she sits close to the crucial 15 percent threshold to qualify for delegates in big states like California and Texas. She is scheduled to make appearances in those states in the coming days.

If Mr. Sanders is looking for knockout blows heading into Super Tuesday, Ms. Warren is more focused on accumulating delegates wherever she can. The delegate margins in Massachusetts are likely to be insignificant enough that her campaign is willing to risk a symbolic defeat here if it means winning delegates elsewhere.

As she chases delegates elsewhere, she is firing up a surrogate and volunteer operation at home. Late Friday, Representative Richard E. Neal of Massachusetts endorsed her.

“This is her home turf,” said Representative Joseph P. Kennedy III, who endorsed Ms. Warren a year ago. “I think Senator Warren has been underestimated plenty of times in the past and I think she does best in the most critical moments.”

Still, there are causes for concern and even Mr. Kennedy was cautious about forecasting an outright victory. “No doubt she’ll put forth a strong showing,” he said.

For much of 2019, Ms. Warren and Mr. Sanders, the two leading liberals in the race, worked almost in tandem at the debates, batting away more moderate rivals and rarely disagreeing with each other.

But then in January, in their most significant breach of the primary, Ms. Warren confirmed a news media report that Mr. Sanders had told her in a private meeting that a woman would not be able to win the White House — he denied saying such a thing — and she confronted him after a debate that month and accused him of calling her a liar.

Mr. Sanders went on to finish in a virtual tie for first in Iowa, then carried the next two states, and he has been building momentum in the polls across the country.

In the New Hampshire primary, on Feb. 11, Ms. Warren did not finish higher than fourth in any of the precincts that border Massachusetts. And in population-dense Nashua, she finished in fifth.

In 2016, Mr. Sanders won 48.7 percent of the vote in the Massachusetts primary, losing narrowly to Hillary Clinton. He was strongest in the more working-class areas of western Massachusetts, carrying more than 70 percent in some precincts that bordered his home state of Vermont.

Mrs. Clinton’s entire margin of victory — which was a little more than 17,000 votes — was from Boston, where she outpaced Mr. Sanders by nearly 20,000 votes.

Mr. Sanders has another advantage: He has run more than $3.4 million in television ads in the Massachusetts markets, mostly in Boston; much of it came in advance of the New Hampshire primary in an attempt to reach voters in the southern part of that state. Ms. Warren has run about one-fifth as many ads: $700,000 worth and none since the New Hampshire primary.

In recent weeks, Mr. Sanders has spent about $400,000 on television ads in Boston, Springfield and Providence, R.I.

On Thursday, Sanders volunteers began organizing a four-day “Berniepalooza” in Worcester, Mass., complete with musical acts and door-knocking across the state. “Canvass all day, party all night, and repeat,” says the event invitation on Facebook.

“One-on-one — if it was Elizabeth Warren vs. Bernie Sanders in the primary — she’d win comfortably,” said Barney Frank, the former Massachusetts representative, who is supporting Ms. Warren. “But with the way it’s worked out, it’s not going to be that easy for her. Again, because she has all this competition for votes.”

Mr. Frank added that the idea of a homegrown presidential candidate is not as exciting in Massachusetts as in some other states.

“Having a presidential candidate from your state is not a novelty if you live in Massachusetts,’’ he said. “You’re talking John Kerry, Michael Dukakis, Ted Kennedy, Mitt Romney. The thrill is gone with that.”