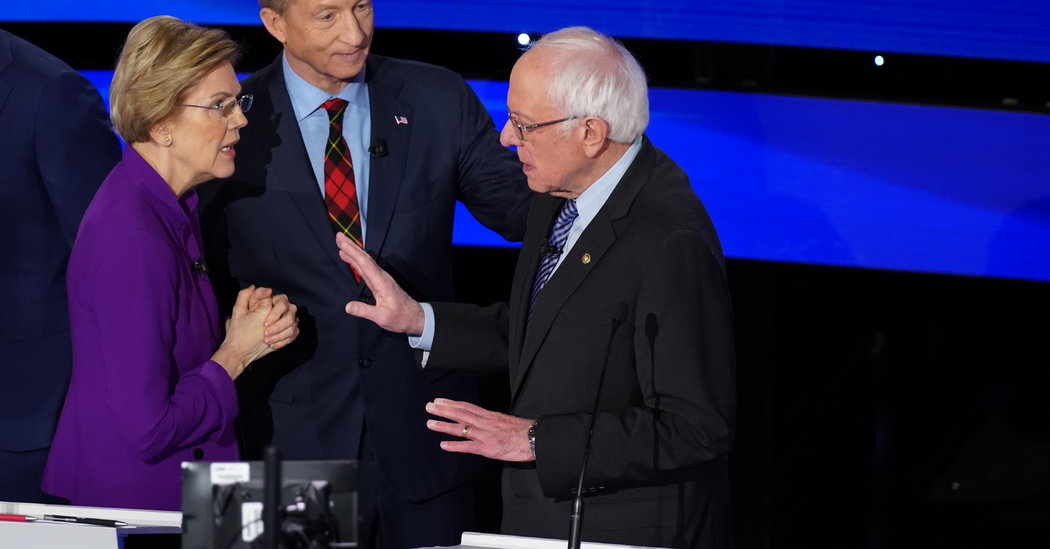 With less than three weeks to go before the Iowa caucuses, tensions escalated between two of the leading Democratic candidates and were on display on national television at a debate in Iowa.

We’ll catch you up on this and other moments you may have missed from a very busy week.

A timeline of the Sanders-Warren tension

For almost a year, Senators Bernie Sanders of Vermont and Elizabeth Warren of Massachusetts had a tacit nonaggression pact. But not anymore.

The trouble started last weekend with the publication of a script that volunteers on the Sanders campaign had been using, telling voters that Ms. Warren appealed to “highly educated, more affluent people” and brought “no new bases” to the party. Then, on Monday, Ms. Warren said that Mr. Sanders had told her in a private meeting in December 2018 that he did not believe a woman could win the presidency — a claim Mr. Sanders vehemently denied.

The disagreement came to a head on Tuesday. During the debate in Iowa, the two senators had a brief, relatively cordial exchange in which Mr. Sanders again denied making the remark and Ms. Warren pivoted to a broader point about women’s “electability.” But afterward, as the candidates were mingling onstage, Ms. Warren confronted Mr. Sanders directly.

Late on Wednesday, an audio recording revealed what she had said: “I think you called me a liar on national TV.” Mr. Sanders responded that they should talk about it another time, and then said that it was Ms. Warren who had called him a liar.

What else happened at the debate

While that conflict between Mr. Sanders and Ms. Warren dominated much of the outside discussion, the debate itself — the seventh of the race — focused on many other things.

Mr. Trump’s dealings with Iran, including his decision to order the killing of Maj. Gen. Qassim Suleimani, were the focus of the first part of the debate. All of the candidates onstage agreed that Mr. Trump had mishandled the situation, but as our colleague David E. Sanger wrote, they were more vague about their own diplomatic approaches and under what circumstances they would use military force.

Senator Cory Booker of New Jersey ended his presidential campaign on Monday. “I got in this race to win,” he told supporters, “and I’ve always said I wouldn’t continue if there was no longer a path to victory.”

Mr. Booker had pitched himself as a positive, unifying candidate — a posture that did not resonate with the Democratic base. Recent polls showed him between 1 and 3 percent, and he did not qualify for the last two debates.

His departure leaves only one black candidate in the race: Deval Patrick, who entered very late and is struggling to reach even 1 percent in polls.

Impeachment takes candidates off the trail

The Senate opened an impeachment trial on Thursday for just the third time in United States history. For daily updates, you can sign up for a newsletter from our colleagues in Washington.

The start of the trial meant that the four senators in the Democratic race — Ms. Klobuchar, Mr. Sanders, Ms. Warren and Michael Bennet of Colorado — were forced to leave the campaign trail less than three weeks before the Iowa caucuses.

Ms. Warren released a plan on Tuesday to cancel student loan debt by executive action. Essentially, this is an extension of the student debt proposal she released months ago — a more aggressive way of enacting the same policy, which would cancel up to $50,000 in debt for about 95 percent of borrowers.

She argues that existing laws give the Education Department the authority to cancel federal loans as well as to issue them, and released a letter from lawyers at Harvard Law School’s Legal Services Center that supported her interpretation. Ms. Warren said she would instruct her education secretary to begin canceling debt on her first day in office, and “to amend any regulations or policy positions necessary to get there.”

The proposal “will require clearing a lot of red tape,” she wrote. “But let’s be clear: Our government has cleared far bigger hurdles to meet the needs of big businesses when they came looking for bailouts, tax giveaways and other concessions.”