WASHINGTON — The Trump administration is racing to contain an outbreak of Covid-19 inside the White House, as some senior officials believe that the disease is already spreading rapidly through the warren of cramped offices that make up the three floors of the West Wing.

Three top officials leading the government’s coronavirus response have begun two weeks of self-quarantine after two members of the White House staff — one of President Trump’s personal valets and Katie Miller, the spokeswoman for Vice President Mike Pence — tested positive. But others who came into contact with Ms. Miller and the valet are continuing to report to work at the White House.

“It is scary to go to work,” Kevin Hassett, a top economic adviser to the president, said on CBS’s “Face the Nation” program on Sunday. Mr. Hassett said he wore a mask at times at the White House, but conceded that “I think that I’d be a lot safer if I was sitting at home than I would be going to the West Wing.”

He added: “It’s a small, crowded place. It’s, you know, it’s a little bit risky. But you have to do it because you have to serve your country.”

The discovery of the two infected employees has prompted the White House to ramp up its procedures to combat the virus, asking more staff members to work from home, increasing usage of masks and more rigorously screening people who enter the complex.

The concern about an outbreak of the virus at the White House — and the swift testing and contact tracing being done to contain it — underscores the broader challenge for Americans as Mr. Trump urges them to begin returning to their workplaces despite warnings from public health officials that the virus continues to ravage communities across the country.

Most restaurants, offices and retail stores do not have the ability to regularly test all their employees and quickly track down and quarantine the contacts of anyone who gets infected. At the White House, all employees are being tested at least weekly, officials said, and a handful of top aides who regularly interact with the president are being tested daily.

“To get in with the president, you have to test negative,” Mr. Hassett said on CNN’s “State of the Union” program.

Mr. Trump continues to reject guidance from the Centers for Disease Control and Prevention to wear a mask when meeting with groups of people. But a senior administration official said the president was spooked that his valet, who is among those who serve him food, had not been wearing a mask. And he was annoyed to learn that Ms. Miller tested positive and has been growing irritated with people who get too close to him, the official said. 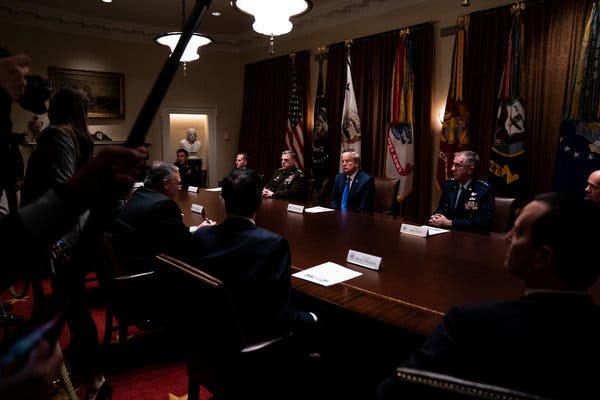 President Trump in a meeting with senior military leaders on Saturday. He has rejected his own government’s guidance to wear a mask when meeting with groups of people.Credit…Anna Moneymaker/The New York Times

Two senior administration officials said there were no plans to keep Mr. Trump and Mr. Pence apart because of a concern that they both could be incapacitated by Covid-19.

Concern about the spread of the virus in the White House has temporarily sidelined three of most high-profile members of the coronavirus task force — Dr. Robert R. Redfield, the director of the Centers for Disease Control and Prevention; Dr. Stephen Hahn, the commissioner of the Food and Drug Administration; and Dr. Anthony S. Fauci, the director of the National Institute of Allergy and Infectious Diseases.

Drs. Redfield and Hahn announced over the weekend that they would self-quarantine for two weeks after coming in contact with an infected member of the president’s staff. Both attended a meeting in the Situation Room last week where Ms. Miller was present. Both doctors said they would continue to participate in the response effort from home, and Senator Lamar Alexander, Republican of Tennessee, said in a statement that they would participate on Tuesday by videoconference in a previously scheduled hearing.

Dr. Fauci said he, too, had begun a “modified quarantine” after what he called a “low risk” contact with an infected staff member.

Ms. Miller, who was a fixture at the White House during the weeks when the task force was holding daily briefings, received her positive diagnosis on Friday morning but had been negative on previous tests as recently as the day before. It is unclear whether the earlier results might have been in error.

Like other members of the White House staff, Ms. Miller did not regularly wear a mask while at work. On Thursday, just hours after receiving a negative diagnosis, she was seen on television talking without a mask within a few feet of several reporters, all of whom were wearing one.

Stephen Miller, one of the president’s closest advisers and Ms. Miller’s husband, is also not expected to come into the White House for the foreseeable future, according to people familiar with his plans. Mr. Miller tested negative for the virus on Friday after his wife’s positive diagnosis earlier in the day.

The White House is frequently testing its staff using ID Now, a rapid test by Abbott Laboratories that can generate a result in five to 13 minutes. The benefit is its speed and portability; the testing machine is about the size of a toaster oven. But some hospitals and doctors found that it was turning up too many false negatives — cases in which people really had the virus, but the test said they did not.

The company advises health care providers to consider retesting patients who test negative but have symptoms of Covid-19 or have been exposed to someone infected.

In recent weeks, some White House aides have also received other tests that require deep nasal swabs and take several hours to process.

Those tests more closely resemble the ones used to diagnose the virus in the United States, which are done in laboratories on high-capacity machines that can process hundreds of samples at a time. They can take several hours to yield results. Those tests, which are made by several different companies, are also not perfect. The accuracy of most tests can depend on a range of factors, including how expertly the sample was collected, how it was stored and how long the virus was circulating in the patient’s body.

Previous memos to the staff at the White House had encouraged West Wing employees to “telework whenever possible.” But Trump administration officials moved beyond that over the weekend, telling several lower-level aides in the press office, who had been coming into the White House, to work from home regardless of how they were feeling. Staff members in the East Wing, who work for the first lady, Melania Trump, are also working from home; other members of the president’s personal staff in the residence are regularly wearing masks.

Senior officials said that they are urging all White House employees to stay home if they felt even remotely sick, a decision that cuts against all the traditional impulses for people who work for the president, which is to keep working no matter what.

Members of the Secret Service who work at the White House are now wearing masks regularly. People who enter the White House campus, which includes the Eisenhower Executive Office Building, where many White House staff members work, will now be asked by medical doctors whether they have any of a list of symptoms. And the people closest to Mr. Trump — including Kayleigh McEnany, the White House press secretary; Mark Meadows, the chief of staff; and Hope Hicks, a senior adviser — are being tested daily, officials said.