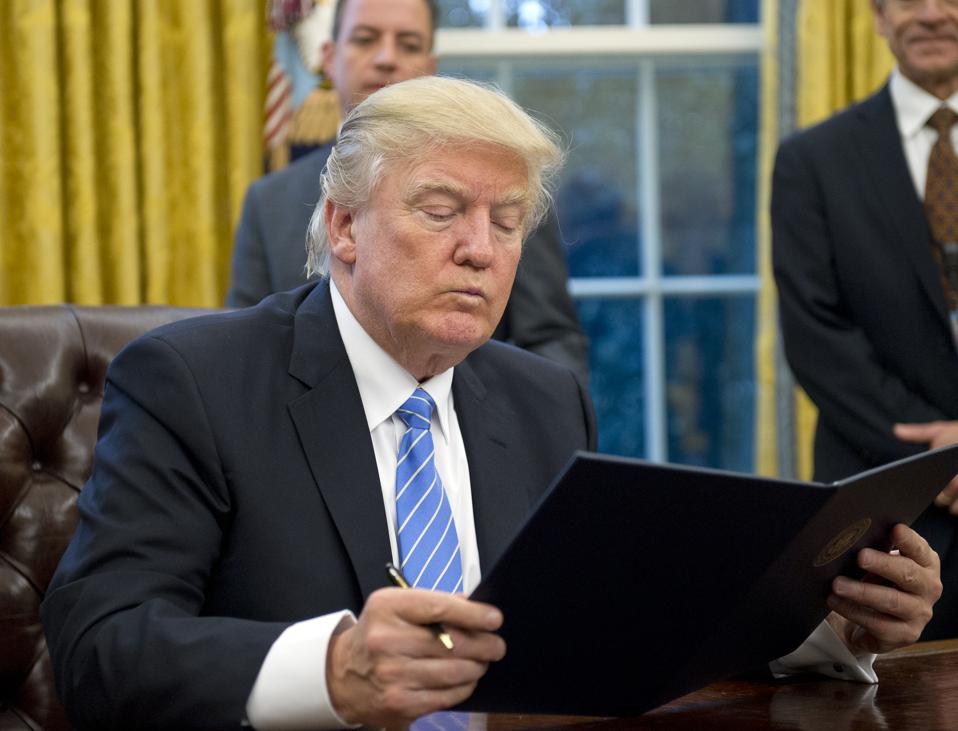 Democrats and the White House failed to agree on a second stimulus package Friday, missing a self-imposed deadline.

Now, President Donald Trump says he plans to take things into his own hands through executive orders. In what was billed as a press conference this evening at his Bedminster, N.J. golf club, Trump made it clear that if policymakers do not agree on a second stimulus package, he will act. “If Democrats continue to hold this critical relief hostage, I will act under my authority as president to get Americans the relief they need,’’ he said.

The threat isn’t new. Trump previously stated that he might issue executive orders today to address the second stimulus aid package. But he didn’t actually issue any orders Friday. He said that the White House remains willing to negotiate and continued to blame Democrats for not agreeing on the second stimulus package.

“Nancy Pelosi and Chuck Schumer continue to insist on radical left-wing policies that have nothing to do with the China virus. So, you have a virus that comes in, and you have people in Congress that don’t want to help our people,’’ Trump said.

Here is what we know about how the executive orders, if executed, might defer payroll tax collection, while extending unemployment benefits, an eviction moratorium, and student loan relief.

While it is clear that Trump can defer tax collection deadlines in an emergency—recall that the IRS extended the deadline for the filing of individual tax returns until July 15th—it is doubtful that Trump can legally cut a tax without Congressional action. That raises the possibility that the deferred payroll taxes would ultimately be owed, unless Congress acted.

Unemployment Benefits to Be Extended Until the End of 2020

He didn’t say, however, how high the federal benefit payments would be or where the money would come from. The HEROES Act passed by House Democrats in May would extend the lapsed benefit at its full $600. Senate Republicans’ HEALS Act proposal would pay $200 a week until states could implement a sliding scale that replaced no more than 70% of a worker’s pay before he was laid off.

Student Loans Will Be Deferred, Interest Will Be Forgiven

Trump said he would not only defer student loan payments under a presidential executive order, but also forgive interest payments until further notice. This is certainly a big one for students. Before the CARES Act was passed by Congress in March, the Trump Administration had deferred payments administratively. The CARES Act provided broader relief, which is now scheduled to expire on September 30th.

Trump also said he would extend an eviction moratorium. “People are evicted, not their fault,’’ he said. The eviction moratorium which was included in the CARES Act expired on July 24th. It applied to renters in properties that have federally backed mortgages and protected roughly a third of renters.