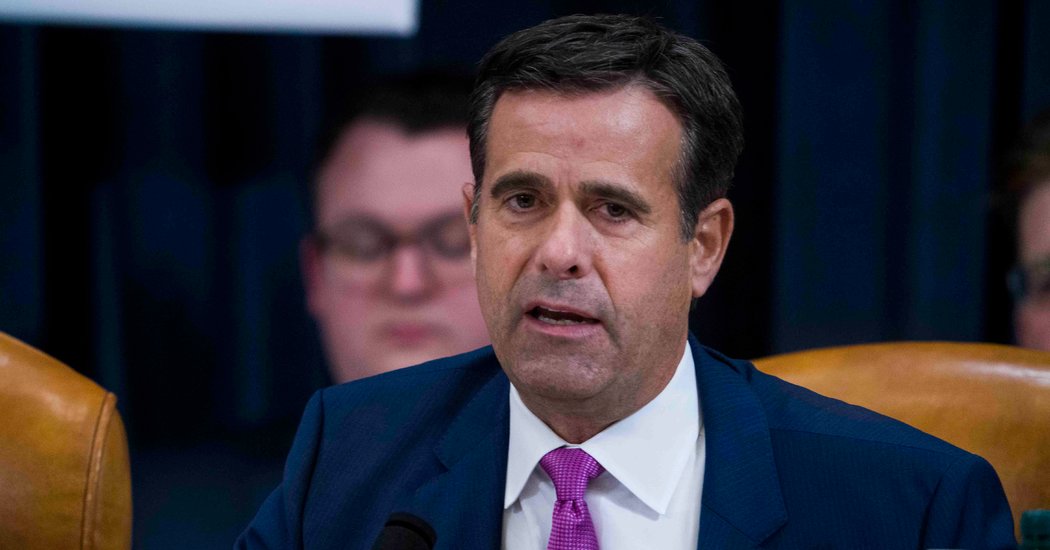 WASHINGTON — The Senate on Tuesday will consider the nomination of Representative John Ratcliffe, Republican of Texas, to be the director of national intelligence, its first hearing since the coronavirus pandemic sent its members home a month ago.

This time around, Mr. Ratcliffe seems likely to receive a warmer reception, at least from Republican lawmakers who control the Senate. Senators want a permanent director to oversee the 17 agencies that compose the intelligence community as they wrestle with how to make sense of the origins and impact of Covid-19, both at home and abroad.

The 9:30 a.m. hearing will be unusual, with a measure of social distancing enforced. Though few lawmakers normally choose to sit through the entirety of a confirmation hearing, new rules will ensure the senators’ chairs in the hearing room do not fill. Senators have been given time slots to come to the hearing room, and no more than six lawmakers are supposed to be in the room at once, a dynamic that could affect the rhythm of the questioning.

If confirmed, Mr. Ratcliffe would replace the acting intelligence director, Richard Grenell, an aggressive Trump defender who has moved to remake the office during his interim assignment. He has prompted unease among key Senate Republicans, including Richard M. Burr of North Carolina, the Intelligence Committee chairman, according to officials involved in the confirmation process.

Lawmakers are likely to focus on Mr. Ratcliffe’s national security knowledge and partisan reputation, and influential Democrats have already signaled that they see him as summarily unprepared for a position that has been filled by military veterans and seasoned national security officials in the past. Mr. Ratcliffe spent part of four years as a federal prosecutor in Texas under President George W. Bush and has served in the House since 2015, including one term on its Intelligence Committee.

Mr. Ratcliffe is a relentless defender of the president, but allies say he is hoping to emphasize areas of bipartisan concern. He is expected to tell senators that he will have two top priorities if confirmed, the geopolitical impact of the coronavirus pandemic and election security, according to a person familiar with his thinking.

While lawmakers may try to question him about the Trump administration’s recent claims about intelligence about the virus’s origin, Mr. Ratcliffe will probably try to avoid that discussion, arguing that he is not privy yet to all of the classified material.

Lawmakers are likely to also press Mr. Ratcliffe to commit to regular election security updates. A report about one such update to the House Intelligence Committee by the administration’s election security czar helped prompt Mr. Trump to replace Joseph Maguire as the acting intelligence chief and eventually nominate Mr. Ratcliffe. Lawmakers have said they are worried the controversy over that briefing will cause the intelligence agencies to limit what they tell Congress.

Mr. Ratcliffe may also be asked to go over his views about Russia’s record of election interference and Moscow’s intentions for the 2020 vote. A recent Senate report reaffirmed the intelligence community’s 2017 finding that Russia favored Mr. Trump, a conclusion with which House Republicans have often taken issue.

He will most likely try to avoid being pinned down on his views of the 2016 Russian interference campaign, according to people familiar with the matter.

But Mr. Ratcliffe will take a position on the reauthorization of the Foreign Intelligence Surveillance Act. Some Republicans are deeply critical of how the law was used to monitor Carter Page, a former Trump campaign adviser, for potential ties to Russia in 2016.

As one of the most vocal critics of the investigation of the Trump campaign in 2016, Mr. Ratcliffe has been hard on the F.B.I. and its use of FISA-court-approved wiretaps. He has said that Mr. Page was surveilled illegally because the F.B.I. lacked probable cause, an argument he says a report by the Justice Department’s inspector general backs up.

Mr. Ratcliffe, according to people familiar with his thinking, supports the surveillance program but wants to ensure that the law works as intended and is not abused.

An overhaul of the law has been approved by the House, but still needs the backing of 60 senators as well as Mr. Trump, who has been critical of government surveillance programs.

As the House was debating and voting on a renewed FISA law, Mr. Ratcliffe abstained from voting once he was nominated to be the intelligence chief. But supporters of the overhaul may see Mr. Ratcliffe as a potential ally in encouraging Mr. Trump to support the new legislation.