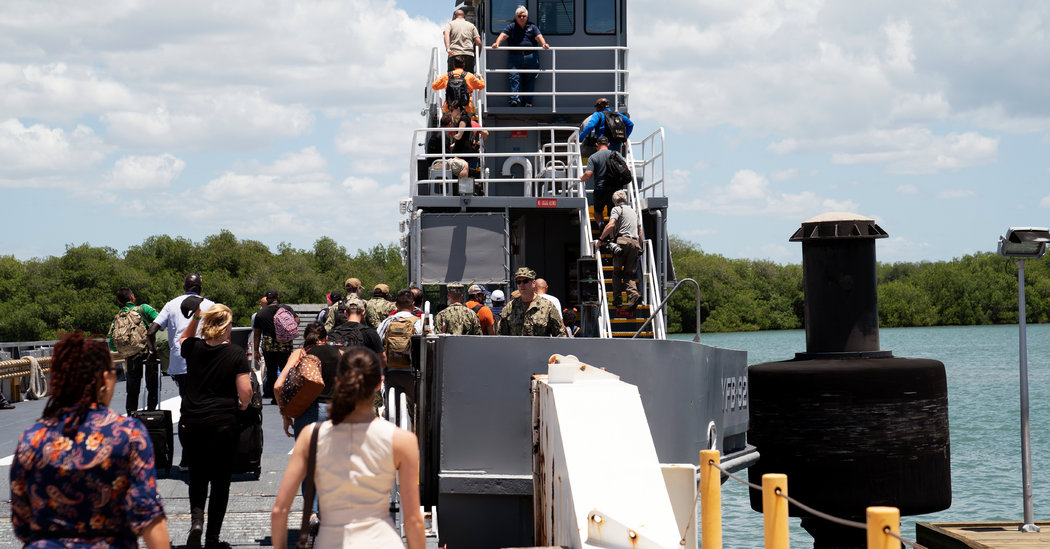 JACKSONVILLE, Fla. — It was a Friday night five years ago, and in a basement bar below the officers club at the Guantánamo Bay Naval Base, two men were getting drunk.

One was the commanding officer, Capt. John R. Nettleton, a 49-year-old career Navy helicopter pilot who had risen to run the remote base on the southeast coast of Cuba, best known as the site of the prison and courtroom for detainees in the war on terror.

The other was Christopher M. Tur, a 42-year-old civilian and onetime enlisted Marine who had moved to Guantánamo with his wife and two daughters four years earlier for a job overseeing efforts to prevent shoplifting from the base commissary.

As the evening wore on, Mr. Tur watched with mounting fury from across the bar as his wife, Lara Tur, chatted cozily with Captain Nettleton, who was touching her in a way that struck a witness as inappropriate. At one point, after Mr. Tur remarked that his wife “was acting like a whore,” the base’s public affairs officer, a friend of the couple’s, told the bartender “to stop serving so much to Captain Nettleton and Lara.”

But things continued to spin out of control. Within hours, there would be allegations of adultery and a bloody fight. Mr. Tur would be found two days later drowned in the sea with potentially lethal amounts of Prozac and alcohol in his system, four broken ribs and a bruise on his forehead.

No one has been charged in his death, but on Friday, Captain Nettleton, his Navy career over, was convicted of obstruction of justice for covering up what happened that night.

A jury of 10 women and two men at the United States District Court for the Middle District of Florida in Jacksonville found him guilty on six charges, which can be punishable by five to 20 years in prison. A sentencing hearing has not yet been set.

The liquor-laced tale of sex, violence, jealousy and power that emerged gradually through testimony and interviews provides a rare, unfiltered view of life among the 6,000 residents of the 45-square-mile outpost behind a Cuban minefield.

Guantánamo Bay, about 500 miles from Miami, has been largely defined for nearly two decades as the site of the secretive detention center, currently holding 40 men as prisoners, and the military courtroom where six of them face death penalty trials.

Yet for people like Captain Nettleton and the Turs, the base is also a small, insular town, with boozy backyard barbecues and a McDonald’s. They bring their families, cars and fishing boats, and live in suburban-style neighborhoods.

“Everybody seems to know everybody else’s business,” Kelly Wirfel, the base’s public affairs officer at the time and the friend of the Turs’, testified at Captain Nettleton’s trial. “You can never get away from it. Drinking and going out with friends is something that happens quite frequently there.”

On Jan. 9, 2015, the Turs and Ms. Wirfel were going together to a “Hail and Farewell Party” at the officers club to welcome the base’s new second-in-charge, Cmdr. Alonza J. Ross.

As they were getting ready, according to Ms. Tur, the director of the base’s social services center, she and Ms. Wirfel got on the phone from their homes and each did a shot to get the party started. They lived in the same neighborhood, Caribbean Circle, and socialized regularly.

Mr. Tur drove them to the club and bought a round of drinks. They then went down a narrow flight of stairs to the Hangar Bar for speeches and a gift exchange. Inside were 25 to 30 people, most of whom were already drinking.

Ms. Wirfel had brought a camera to document the evening but quickly abandoned the idea. “There was so much drinking going on,” she testified.

Across the bar, Captain Nettleton and Ms. Tur were close, touching and talking in a way that Ms. Wirfel found “disrespectful” to Mr. Tur, she testified. Mr. Tur noticed, too. Ms. Tur testified that she and her husband later quarreled in an alley outside the bar. “I told him that we were done, and get his hands off me,” she said.

Captain Nettleton staggered off, Ms. Wirfel said, and a “very intoxicated” Ms. Tur tried to walk with him until Ms. Wirfel stopped her. Commander Ross told Mr. Tur to go home, and watched him walk in the opposite direction.

The details of what happened next are a matter of some dispute, but testimony and trial evidence have established these basic facts: Captain Nettleton returned to his stately, 80-year-old official residence on a promontory above the bay. Mr. Tur showed up there soon after. There was a fight. Then Mr. Tur disappeared.

Captain Nettleton’s daughter Julia, 15 at the time, was home and at 10:55 p.m. sent a text to a friend. “They are getting into a fight downstairs,” she wrote. “It started with a man coming into my house screaming at my father.” Julia Nettleton, now in college, testified that she heard a “thumping and banging noise — it sounded like things hitting the wall to me, or hitting furniture.”

She had looked down the staircase and saw her father — 6 feet 3 inches tall and 230 pounds — arguing with a man at the door, and was so scared that she locked herself in a bedroom.

Then it got quiet, so she crept downstairs and saw her father flat on the floor, face down, and a man standing over him using a phone.

Ms. Wirfel testified that Mr. Tur called her cellphone sometime after he left the officers club, while she and Ms. Tur were waiting for a ride home. Mr. Tur, she testified, told her that he had “knocked the skipper out.” She said she dismissed his remark as a prank because she heard Captain Nettleton say, “Oh yeah, he just knocked me out.”

Taking the stand in his own defense, Captain Nettleton testified on Tuesday that Mr. Tur must have come into his house uninvited because the first thing he remembered of the episode was regaining consciousness with “someone shaking me and saying, ‘Wake up, Marine.’”

It was Mr. Tur standing over him, he testified, alternately hostile and friendly, trying to coax Captain Nettleton back to the bar.

Suddenly, he testified, Mr. Tur “just gets this look of rage” and began attacking him — pushing him against a wall, tearing his shirt and lunging at him. “I just throw a quick punch and I hit him” in the nose, Captain Nettleton said, accounting for blood traces from the living room to the kitchen.

Captain Nettleton said he last saw Mr. Tur at his kitchen table with ice and a paper towel to his nose. Captain Nettleton went upstairs to talk to his daughter, and by the time he went down, Mr. Tur was gone.

Ms. Tur described her husband as jealous, controlling and abusive, and said she was planning to divorce him. She had found work at the base’s Fleet and Family Support Center, and had risen to become the director — a more senior job than her husband’s.

In the month before he died, Ms. Tur said, her husband demanded she be home at 5 p.m. each day to make dinner with “a smile on my face,” kiss him every time she came and went, and call him frequently.

Months earlier, she said, while they were attending a meeting in Jacksonville, Fla., she and Captain Nettleton had had a sexual encounter. She called it a one-time mistake by “two friends that crossed a line.” There had been flirtation at Guantánamo, she said, and “just kissing.”

Captain Nettleton testified that he chose not to report the fight because he considered himself the victim of an assault, and to report it would have cost Mr. Tur his job. Captain Nettleton also said that he felt he had wronged Mr. Tur because “I had slept with Lara in November — and he didn’t know it, but I did.”

By the next morning, it was clear that Mr. Tur was missing. It did not initially cause alarm because, Captain Nettleton said, Ms. Tur said there were instances of him not coming home at night, and later reappearing.

As the day progressed, Captain Nettleton ordered a basewide search. The sailors in charge mapped it out believing that Mr. Tur was last seen at the bar because Captain Nettleton had not told them he had been to his home. After first dismissing Mr. Tur’s call to her the previous night claiming to have knocked out Captain Nettleton, Ms. Wirfel told Commander Ross about it.

One thing did strike Commander Ross as strange, he testified: He looked into the possibility of bringing a Coast Guard helicopter to the search, a suggestion, he said, that Captain Nettleton angrily rejected.

Captain Nettleton testified that he considered the idea outlandish because the Coast Guard pilots would not know the no-fly zones in and around the base and could create a problem with the Cubans if they strayed into their territory.

By then, agents of the Naval Criminal Investigative Service, or N.C.I.S., were questioning Ms. Tur at their base office. She denied having an affair with Captain Nettleton. At the trial, she testified that she was unaware at the time that her husband had fought with Captain Nettleton, and that had she known about it, would have answered differently.

In the midst of the interview, she said, she was summoned to a room where Captain Nettleton, wearing his blue dress uniform, notified her that her husband was dead and “offered his condolences.”

Ten days later, Captain Nettleton was relieved of his command. Someone had made an anonymous complaint to a Navy inspector general’s office. He was discovered not to have told his superiors and security officers about the fight, and he denied an affair with Ms. Tur.

Had Captain Nettleton told the truth from the start, those searching for Mr. Tur might have had a better idea of where to look for him, witnesses testified.

How Mr. Tur got into the water “is not a mystery that will be solved in this courtroom,” Todd Gee, a federal prosecutor, told jurors. The charges in the case revolve around Captain Nettleton’s failure to report the fight “even though he knew Mr. Tur was somewhere on Guantánamo Bay, drunk, injured and bleeding,” Mr. Gee said, and Captain Nettleton’s continuing lack of candor after Mr. Tur’s body was recovered.

It is unclear why Captain Nettleton never faced Navy charges. He retired in March after wrapping up his career at Naval Air Station Jacksonville.

Before the trial began, Judge Timothy J. Corrigan forbade prosecutors and defense lawyers from speculating on how or why Mr. Tur ended up in the water.