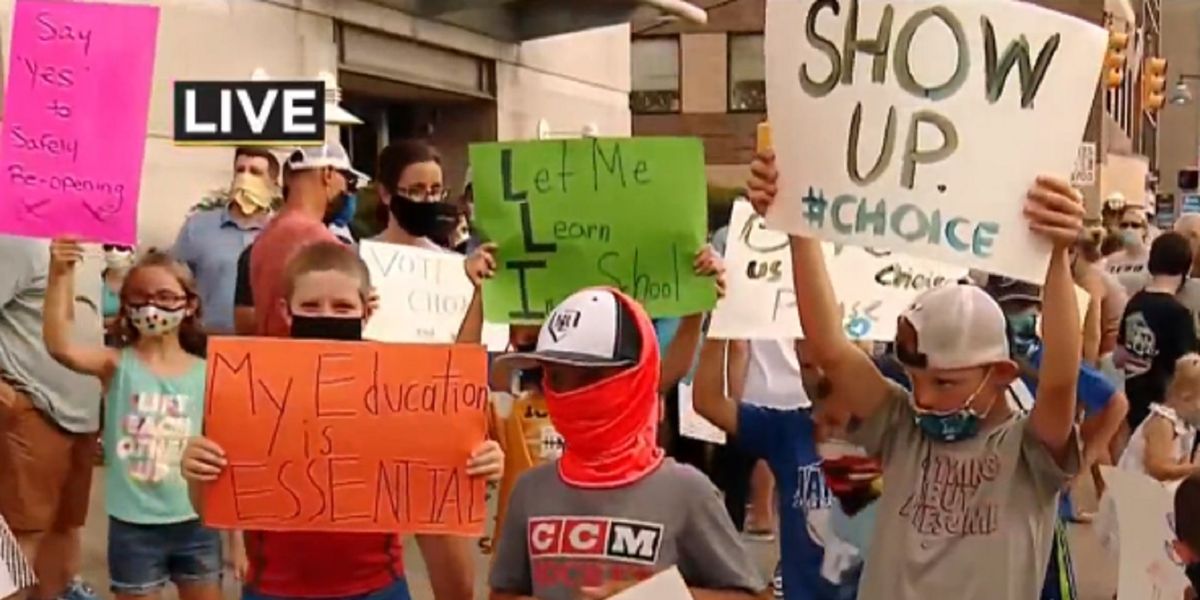 Parents and students in Mt. Lebanon, Pennsylvania, held a protest Wednesday demanding their school district “show up” and allow in-person classes to resume at the start of the school year as the school board mulls a plan to hold classes entirely online for months.

But the district has voiced concerns over COVID-19, saying a number of teachers have reservations about returning to school right now.

KDKA-TV reported the crowd of families rallied ahead of the district’s Thursday vote on whether or not to move forward with the board’s proposal to begin the first nine weeks of school with only the option to attend remotely. The protestors want a choice on whether to children attend class in-person or remain at home.

Kids could be seen holding signs that read, “Show up,” “I miss my friends,” and “I learn better in school.” At least one parent carried a sign that read, “Give us a choice.”

The outlet said “the district now has advocated for their preference for beginning the school year entirely remotely,” with the district citing “health concerns and a potential lack of teachers” willing to reenter the classroom amid the pandemic.

It’s a decision facing school districts across the U.S., and the Mt. Lebanon demonstration is not the first.

Similar protests have been held in recent weeks throughout the nation, including in Palm Beach, Florida, and Boston, Massachusetts.

Likewise, teachers and parents throughout the country have held protests against districts that have decided to reopen with in-person classes, in places like Rochester, New Hampshire, and Reno, Nevada.

Proponents of returning to in-person classes sooner rather than later are concerned that children are not receiving the same quality education with online courses, while opponents say the risk of spreading COVID-19 in schools is too great.

Another strong argument for reopening schools is that most parents work, and not all of them are able to stay home to care for their children. That point was acknowledged by Senate Minority Leader Chuck Schumer (D) last week, when he said during a press conference, “If we don’t open up the schools, you’re going to hurt the economy significantly because lots of people can’t go to work.”

Meanwhile, several teachers unions have come out against the reopening of schools. The American Federation of Teachers even told its chapters it would provide financial resources to chapters that go on strike in protest of going back to in-person learning at the start of the school year.