WASHINGTON — The New York-based law firm Skadden, Arps, Slate, Meagher & Flom has paid $11 million or more to avoid a lawsuit by a former Ukrainian prime minister, Yulia V. Tymoshenko, who blamed the firm for aiding in her political persecution.

The settlement, which has not been previously reported, is related to the firm’s representation starting in 2012 of the Russia-aligned government of Viktor F. Yanukovych, then the president of Ukraine.

Skadden’s Ukraine work, which has already led to federal investigations and steep fines, centered around a report produced by the firm that Mr. Yanukovych’s allies used to try to justify his government’s treatment of Ms. Tymoshenko, a leading rival of Mr. Yanukovych. She was imprisoned starting in 2011 on abuse of office charges that the international community widely condemned as politically motivated.

After Mr. Yanukovych’s government fell in 2014 amid street protests against its corruption and pivot toward Moscow, Ms. Tymoshenko was freed from prison and began plotting a comeback, as well as retribution against Mr. Yanukovych and those she believed enabled him, including Skadden.

In a December 2018 interview with The New York Times in Washington, she recalled “it was very painful” learning of Skadden’s work “when I was in prison and was observing this in solitary confinement.”

Speaking through an interpreter, she accused Skadden’s lawyers and other prominent Westerners of “whitewashing Yanukovych and his government” in exchange for money, adding: “It’s a pity that such a well-known company like Skadden even considered to take this case to deliver. This is a dirty, dirty, dirty contract.”

After the interview, she and her lawyer, Sergei Vlasenko, who has also claimed he was treated unfairly by the Yanukovych government, retained the law firm Reid Collins & Tsai to explore the possibility of suing Skadden over its work, according to two people familiar with the arrangement.

Skadden paid $11 million or more to settle the case before a lawsuit was filed, according to people familiar with the settlement. Funds from the settlement appear to have been passed through Reid Collins to Ms. Tymoshenko and Mr. Vlasenko.

That arrangement appears to be reflected in records filed by Ms. Tymoshenko and Mr. Vlasenko with the Ukrainian government, which show that they each received about $5.5 million from Reid Collins between July and last month.

The records do not mention Skadden. In his filings, Mr. Vlasenko characterized the money as “foreign income.” Ms. Tymoshenko described it in a filing this month as “compensation for the damage caused by the political repression of 2011-2014, which was received in the United States at the stage of precourt settlement.”

The payments come after Skadden paid $4.6 million last year to settle an investigation by the Justice Department into whether its work for the Yanukovych government violated foreign lobbying laws.

The firm subsequently revealed in filings with the Justice Department that it had been paid a total of more than $5.2 million for its work, with $4.15 million coming from a Ukrainian oligarch and his American lobbyist, and $1.1 million coming from the Ukrainian Justice Ministry. As scrutiny of the work mounted in 2017, Skadden returned $567,000 to the Ukrainian government, The Times revealed.

One of the lawyers who assisted with the report, Alex van der Zwaan, admitted to lying to federal investigators that year about his communications related to the firm’s work for Mr. Yanukovych’s government.

The lead Skadden lawyer on the Ukraine account, Gregory B. Craig, a former White House counsel for President Barack Obama, was acquitted last year of a felony charge that he lied to federal authorities about the work. And Paul Manafort — who served as Mr. Yanukovych’s political consultant and recruited Mr. Craig and Skadden to work on the account — is serving seven and a half years in prison for financial and lobbying violations related to his work for Mr. Yanukovych.

The investigations of Skadden, Mr. Manafort and Mr. Craig were prompted by the special counsel’s investigation into interference in the 2016 election by Russia, and whether the country colluded with Donald J. Trump’s presidential campaign. Mr. Manafort had served as the chairman of the Trump campaign. While Skadden’s involvement with Mr. Manafort and the Russia-aligned government of Mr. Yanukovych predated the Trump campaign, the scrutiny made Skadden a poster child for the Justice Department’s crackdown on the type of lucrative, but shadowy, foreign work that had become a profit center for politically connected lawyers and consultants across Washington. 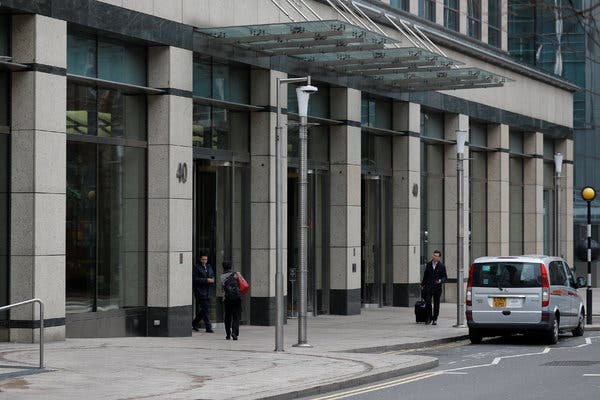 Skadden, Arps, Slate, Meagher & Flom’s offices in London. The investigation of the firm was prompted by the special counsel’s investigation into Russian interference in the 2016 election.Credit…Peter Nicholls/Reuters

Skadden has continued to publicly defend its Ukraine work, casting the Tymoshenko report as a cleareyed, independent assessment that did not absolve Mr. Yanukovych of wrongdoing. The report concluded that while Ms. Tymoshenko’s trial violated some of her rights, her conviction was supported by the evidence presented at trial. And the report found no evidence that the prosecution was politically motivated.

But the settlement suggests that the firm is not eager to continue to publicly defend the report or its work in Ukraine.

Skadden did not respond to multiple requests for comment to its lawyers and public relations executives, including an email containing a detailed list of questions about the settlement. Mr. Craig declined to comment.

Mr. Vlasenko and Reid Collins did not respond to requests for comment.

Ms. Tymoshenko’s spokeswoman declined to answer questions about the settlement, but she pointed to a statement that the former prime minister posted on Facebook in which she wrote that the money came “from an entity in the U.S. at the stage of precourt settlement.”

In the post, Ms. Tymoshenko heralded the settlement as “further proof that my imprisonment in 2011-2014 was a political reprisal against me.” She added, “there will be no further details,” because of “legal restrictions in the case,” suggesting that the agreement might be subject to a confidentiality clause.

Reid Collins is known for pursuing malpractice cases against large legal and accounting firms on contingency, meaning it gets paid a percentage of settlements extracted from those firms, often before lawsuits are filed.

There is no record of a lawsuit by Ms. Tymoshenko or Mr. Vlasenko against Skadden.

But the European Court of Human Rights ruled in 2013 that Ms. Tymoshenko’s arrest and detention midway through her abuse of power trial in 2011 had been unlawful, unjustified and politically motivated. The ruling could have opened the door to a claim against Skadden under the Alien Tort Claims Act of 1789, which allows foreign nationals to sue in U.S. federal courts for violations of international laws or U.S. treaties.