The Trump campaign had high expectations for the president’s Tulsa rally—but turnout was lower-than-expected as parts of the arena sat empty and the campaign was forced to scrap a plan to give a speech to an overflow crowd. 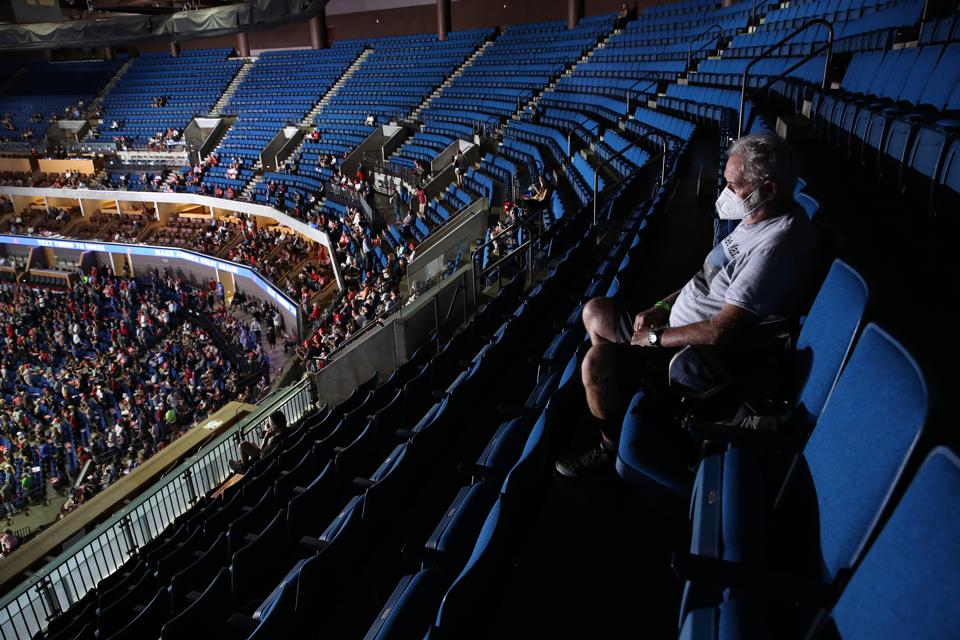 A supporter sits in the upper seats during a campaign rally for U.S. President Donald Trump at the … [+] BOK Center, June 20, 2020 in Tulsa, Oklahoma.

While thousands attended the rally at the BOK Center in Tulsa, much of the upper sections of the arena, which can hold 19,200 people, were empty.

Before the event, the campaign abruptly scrapped a plan for Trump to give a second speech to an overflow crowd outside the venue and workers began dismantling the stage outside before the president even got onstage indoors.

Trump campaign Communications Director Tim Murtaugh blamed the low turnout on the media scaring away attendees and protesters who blocked access to metal detectors, which he claims prevented people from entering.

Trump, too, said during his speech that, “We had some very bad people outside, they were doing bad things,” referring to protesters.

The campaign said that 1 million people requested tickets and even sent out a text to people who signed up saying “there’s still space!” a few hours before Trump took the stage, according to CNN reporter Kevin Liptak.

The rally was Trump’s first since he paused campaigning due to the coronavirus, and was intended to show Americans that the country is ready to return to normal amid the pandemic and unrest from Black Lives Matter protests across the country. But public health experts warned that large, indoor crowds pose a serious risk of spreading the coronavirus, especially because Oklahoma is reporting record-numbers of cases. The event was also controversial because it was originally scheduled on Juneteenth, which celebrates the end of slavery in the U.S., though Trump eventually pushed the rally back so it wouldn’t coincide with the holiday.