Just because you’re been lucky enough to make a couple billion or so in your life doesn’t mean you should be able to pick up and move anywhere you want, taking those assets with you. To quote a famous philosopher and (now) very wealthy person himself:

With that dismissive declaration ringing in your ears in these socialist-leaning, confiscatory times, it should come as no surprise that struggling blue states – watching their treasuries’ lucre ooze over the borders to the freer pastures of blood-red states – are banding together to hang on to some of those dollars in perpetuum et diem (forever and a day). It’s a co-ordinated all-out assault on those greedy, grasping symbols of capitalism.

Left-leaning proponents of taxing the assets held by America’s billionaires have a new target: In lieu of a federal wealth tax, state lawmakers want to tax billionaires where they live, in states like California, Washington and New York.

A group of legislators in statehouses across the country has coordinated to introduce bills simultaneously in seven states later this week, with the same goal of raising taxes on the rich.

“The point here is to make sure we do at the state level what is not being done at the federal level,” said Gustavo Rivera (D), a New York state senator who is part of the seven-state group.

Some of the state bills resemble the “wealth tax” that Sen. Elizabeth Warren (D-Mass.) pitched during her 2020 presidential candidacy. It’s a form of taxation never before attempted in the United States, in which very wealthy people would have to pay taxes annually on assets that they own, rather than just their income that year. Other bills focus on raising money from more conventional forms of taxation, including capital gains taxes and estate taxes.

When you’re f-ing up so bad that you tax people who have already left your state forever. New York, Illinois, Washington do the same – what’s the common thread here? Hmmm… pic.twitter.com/rFtNlt2so8

You can practically hear them salivating at the thought of getting those damn rich guys. MUWAHahahaha!!!

The campaign is part of a broader national focus on new taxes on investment, entrepreneurship, and wealth. For instance, a pending proposal in New York would yield a nearly 30 percent tax on wealthy New York City residents’ capital gains income, about 50 percent higher than the 20 percent federal tax on long-term capital gains. Elsewhere, lower estate tax thresholds would impose the tax on the upper middle class and not just the very wealthy—including the small businesses and farms policymakers have long worked to protect from estate taxes to avoid forcing them to break up to pay the tax. And the wealth taxes themselves would vary across the seven states, partly due to differing state constitutional constraints.

Not that constitutions will always stand in the way of legislative proposals. A wealth tax is transparently in conflict with Washington’s state constitution, but that has not stymied prior proposals and it isn’t standing in the way of a new effort to be unveiled on Thursday. California proposals have tended to include exit taxes—designed to continue to tax those who respond by leaving the state—that implicate a host of federal constitutional provisions, a reality that has provoked little consternation among supporters. And most prior proposals would tax worldwide net worth for state residents, with all the constitutional questions that raises.

Suffice it to say, some of these proposals, if you are not a dedicated money grabber like Fauxcahontas Warren, are sketchy as all get out, even to the non-billionaire among us. Say, like…me. They want to tax the nebulous concept of “worth,” even though that demonstrably changes…well, nowadays, could be hourly.

…“Just because a company might sell for hundreds of millions of dollars in the future doesn’t mean that its current owners have any significant wealth,” Walczak said. The on-paper net worth of billionaires fluctuates drastically as companies’ stock prices or valuations rise and fall, making it hard to figure out how much they should pay if taxed on that wealth, he added.

But Frame, the Washington lawmaker, argues that billionaires should still be taxed on such holdings even if they don’t actually have the money in their bank accounts. After all, property taxes go up when the homes are assessed for a higher value, even if residents don’t actually see that money without selling the house, she notes.

They are confusing a physical thing – a home and its value – with the value assigned to a company, a portfolio, or a brand name, which is part of an owner’s “worth.” That’s all air money. It can vaporize almost instantly, unlike your home. It doesn’t become real until you sell it – win or lose – and then you pay the taxes (or take the loss) on the transaction value. Why are there taxes on your house? It’s a physical thing. Roads go to your house, children might use the schools, emergency services might have to put a fire out or an ambulance is called. They are tangible. None of these things happen, nothing tangible to measure, in the ether where “worth” exists .

…If prior efforts are any indication, some of these proposals (like Washington’s) will have a base of fairly liquid, publicly traded investments, for which there is a known market value. But others, potentially including California’s, would tax all assets of the wealthy, many of which lack a known market value. This could include tangible assets, like artwork, as well as nonfinancial intangible assets, like trademarks or goodwill, which can be nearly impossible to value. Worst of all, it can include ownership stakes in closely held corporations and partnerships, which often defy evaluation.

A promising tech startup might briefly be valued at hundreds of millions of dollars but fold without ever turning a profit. Another might fly under the radar until suddenly acquired for billions of dollars. Owners of the former might face insurmountable wealth tax burdens on a hypothetical net worth that never generates actual income and ultimately vanishes, while owners of the latter might avoid any wealth tax on a company that presumably had significant value before a price tag was affixed by its acquisition.

So they want to pick a number and tax that. And if you literally have to sell off something to pay the tax bill on this conceptual number, it’s all good with the fellows who came up with the tax plan.

…He [Emmanuel Saez, Berkeley economist] has no objection to a tax that might compel rich people to sell stocks or other assets, he said. In the case of the California proposal, which would impose a 1.5 percent tax above $1 billion in assets, “you would sell 1.5 percent of your stock and you pay the tax,” he said.

“If it’s an annual wealth tax, it’s taking a fraction of your wealth every year. Almost by definition, you’re going to have less wealth after you pay the tax.”

They look at it as a win for you because you’ve just reduced your tax burden! “Berkeley economist.” Aren’t socialists great? Of course it makes perfect sense to them, because…well, I’ll let the rich guy tell you.

These California fellows are exceptionally creative when it comes to fingers in your pockets. Not only do they want a “wealth tax,” they want it world-wide, even if you move out of state, and to basically cover every last thing you own, right up to that Rembrandt you were finally able to buy at Sotheby’s a couple of years ago. With these rapacious highwaymen, what’s the point of even trying to make money?

California lawmakers are pushing legislation that would impose a new tax on the state’s wealthiest residents — even if they’ve already moved to another part of the country.

Assemblyman Alex Lee, a progressive Democrat, last week introduced a bill in the California State Legislature that would impose an extra annual 1.5% tax on those with a “worldwide net worth” above $1 billion, starting as early as January 2024.

As early as 2026, the threshold for being taxed would drop: those with a worldwide net worth exceeding $50 million would be hit with a 1% annual tax on wealth, while billionaires would still be taxed 1.5%.

Worldwide wealth extends beyond annual income to include diverse holdings such as farm assets, arts and other collectibles, and stocks and hedge fund interest.

Today it’s billionaires, in a year or two, millionaires…and then they’re coming for us. They already make it painful. New Jersey has had an exit tax for years. 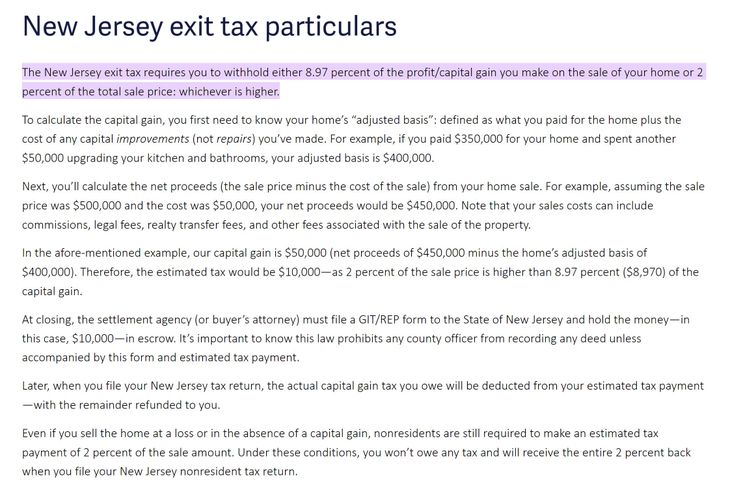 People are still bailing out as fast as they can, but blue states make sure it hurts.

If any of these proposals make it to law, the outflow from these places could turn into a wave, even before the court challenges start. Unless you’re a truly altruistic blue-ionaire, who has always wanted them to tax you more, but never got around to writing that voluntary check. I’ll be curious to see if those kinds of guys stay.