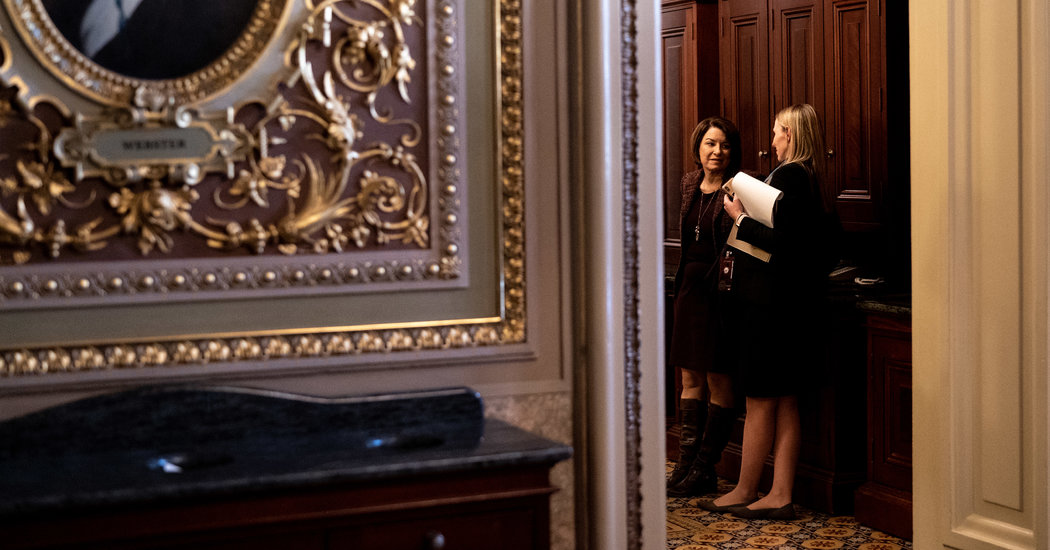 WASHINGTON — Hours into the first long night of President Trump’s impeachment trial on Tuesday, Senator Bernie Sanders of Vermont kept checking his watch. Senator Elizabeth Warren of Massachusetts sipped hot water — one of two drinks allowed in the chamber — to warm up. Senator Amy Klobuchar of Minnesota jotted down notes. And Senator Michael Bennet of Colorado stood and listened.

Around the same time, more than 1,000 miles west at a community college in Fort Dodge, Iowa, former Vice President Joseph R. Biden Jr. was warning an audience about the divided nation that the next president would inherit.

And at a veterans hall in Cedar Rapids, Iowa, former Mayor Pete Buttigieg of South Bend, Ind., was coming out swinging against Mr. Trump, prompting 1,200 voters to chant “Pete! Pete!”

“Wouldn’t it be nice to put the tweets behind us?” Mr. Buttigieg said.

Something extraordinary is happening to the Democratic presidential primary: An intensely competitive race has been thrown into a state of semi-suspended animation less than two weeks before caucusing begins. Three candidates who have a shot at breakout performances in Iowa on Feb. 3, Ms. Warren, Mr. Sanders and Ms. Klobuchar, are suddenly stuck at the Senate impeachment trial in Washington, while their rivals have the campaign trail largely to themselves.

Normally the final two weeks before the caucuses are a frenetic blitz of four to six events a day for each candidate, barreling from the Mississippi River in the east to the Missouri River in the west. Instead, Ms. Warren, Mr. Sanders and Ms. Klobuchar — as well as Mr. Bennet, who is averaging less than 1 percent in Iowa polls — are in their Senate seats for many hours on end, operating under a vow of near-silence, unable to see and be seen by the hundreds of voters they would normally be courting from morning to night.

They are putting their campaign needs in the hands of their young field organizers, who are knocking doors in subfreezing temperatures in Iowa, and political surrogates who are standing in for them at events. Among those on deck are Representative Alexandria Ocasio-Cortez of New York for Mr. Sanders; former Secretary Julián Castro, his twin brother, Representative Joaquin Castro of Texas, and the actress and activist Ashley Judd for Ms. Warren; and Phill Drobnick, a Minnesotan who coached the Olympic gold medal-winning men’s curling team in 2018, for Ms. Klobuchar.

Winning Iowa usually depends on candidates making strong closing arguments and sealing the deal in person with undecided caucusgoers. But the senators are counting on their political organizations and their weekend fly-ins when the trial is adjourned to carry the day.

Mr. Biden and Mr. Buttigieg have wasted no time angling for an advantage, traveling across Iowa on Tuesday and Wednesday as the trial was getting underway, and making plans to devote precious time to campaigning later this week in New Hampshire and South Carolina, respectively. Candidates normally would never leave Iowa at this late stage, but Mr. Biden and Mr. Buttigieg don’t have to worry about Ms. Warren or Mr. Sanders, their chief rivals, fighting for caucus votes on the ground.

“Tomorrow I will be in an impeachment trial,” Mr. Sanders told supporters Monday night in Des Moines. “How long it lasts? Honestly don’t know. I am not going to be able to be here as much as I would like. So you guys are going to have to carry the ball.”

In Iowa, several voters said it wasn’t fair to judge the candidates based on whether or not they were present in the state.

As she waited to hear from Mr. Biden on Tuesday evening, Pam Rose, 65, of Fort Dodge, said that it was “unfortunate” that the senators had to be off the trail, but stressed that she did not hold it against them.

“Their job is important,” she said. “It’s not fair to ask if Joe has an advantage if he’s not in Washington.”

On Wednesday, as the senators arrived at the Capitol for party lunch meetings before the trial started up again, Mr. Buttigieg was in Dubuque, comforting a woman seeking laws to speed the development of experimental drugs to treat her A.L.S.

Speaking before an audience of hundreds, he seemed to go out of his way to describe the time he has spent in Iowa, citing voter after voter he has encountered in the state in the past year — perhaps a pointed reminder that several of his rivals were absent.

When asked about climate change, he recalled a visit to a tiny town in the western part of the state. “I’m thinking about a kid in Shenandoah who raised his hand and asked me how farm families could be part of the solution,” he said.

A little later, as senators were preparing for another marathon session, Mr. Biden reminded voters in Mason City of the great responsibility they had as residents of the leadoff caucus state, before hitting back at a reporter who had pressed him on his tensions with Mr. Sanders.

Mr. Biden, a former six–term senator and decades-long evangelist for the chamber, did not seem upset to be missing the historic trial. In fact, he barely tuned in.

“I didn’t get to see it all because I was out here campaigning in Iowa, doing town meetings,” he said in a television interview Wednesday morning. “But what I saw the reruns of, it was — I have a great respect and reverence for the Senate, for real. And I was embarrassed for the institution.”

No one knows how long the trial will last. Could it conclude before the caucuses? Perhaps. Or, as some campaign staff members argue, their voices tinged with a touch of wistfulness, Republicans could vote to end proceedings at any moment.

The uncertainty has led to some flexible scheduling. Ms. Warren plans to travel along the eastern border of Iowa for a series of town halls on Saturday. Or not, if the Senate has other plans. Schedules for Ms. Klobuchar and Mr. Sanders remain even more uncertain, their aides say.

But the candidates are pursuing creative solutions to make up for their absence. Ms. Klobuchar spent her morning in a television studio in Washington, beaming into local stations in Iowa and New Hampshire for interviews that would air while she was in the chamber, and rushed out for a cable interview in the afternoon, during a break in the proceedings. Her daughter took over her Twitter account to detail her own travels across Iowa.

“They’re doing what they’re supposed to do,” he said, adding, “I hope that people look more broadly” than who would gain a political edge in Iowa during the Senate trial.

“We want them in the trenches,” Nancy Oehlert, his wife, said, hoping for — though not expecting — a conviction of Mr. Trump in the Senate.

Strict Senate rules, dating back decades, complicate the workings of modern campaigns responding to rapidly changing news cycles. Official decorum guidelines circulated last week banned cellphones and urged senators to “refrain from speaking” with their colleagues during the trial. No food is permitted and only two beverages, water and milk, are allowed. Communication with the outside world happens through notes ferried out of the chamber by Senate pages. When Hillary Clinton assailed Mr. Sanders in an interview published on Tuesday, his team struggled to confirm details about their relationship, saying the senator was difficult to reach.

Walking back into the Capitol on Wednesday morning, Ms. Warren dismissed concerns that her time in Washington could cost her ground in the primary contest. “Some things are more important than politics,” she said.

Aides to Ms. Warren said she had left the Capitol at 2 a.m., after spending the previous twelve hours in near silence, with short breaks to check her phone and grab some salad in the Senate cloakroom with her colleagues. (She passed on the pizza, they reported.)

In Iowa, Mr. Buttigieg’s day ended around 10 p.m., when he met a friend for dinner Tuesday evening before retiring to his hotel. Over the course of nearly 12 hours, his campaign said, he’d addressed nearly 1,800 voters.