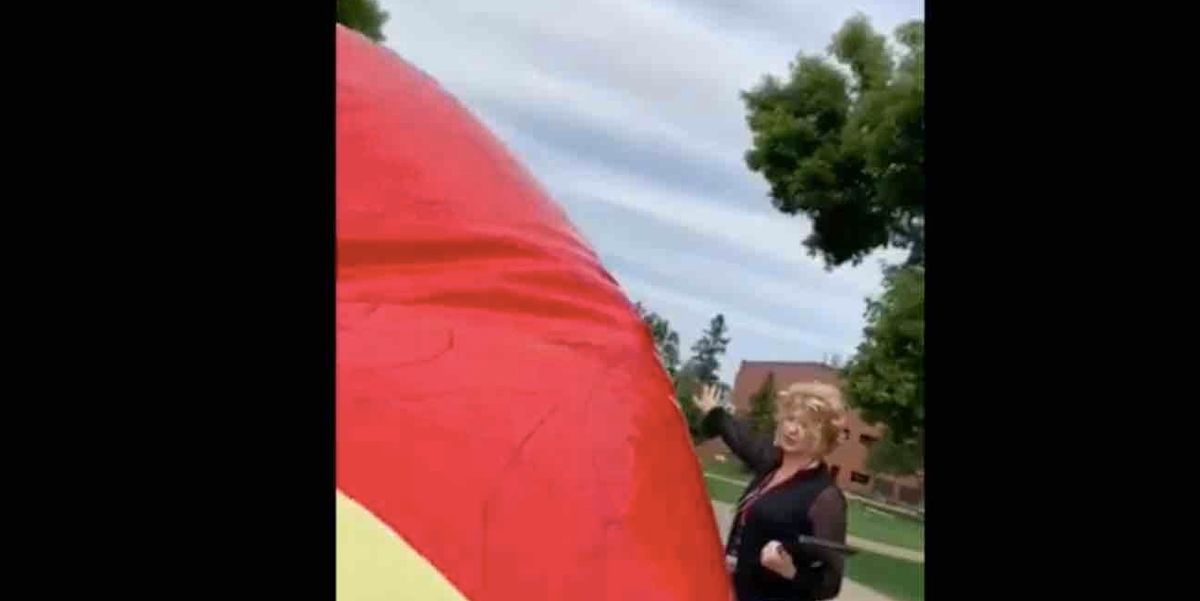 Sofie Salmon, a freshman at the University of Wisconsin–River Falls, decided last September she’d break out an oversized beach ball — dubbed a “free speech ball” — and roll it around campus to encourage fellow students to express their First Amendment rights by writing messages on it, Alliance Defending Freedom said.

It also was a way for Salmon and her friends who accompanied her to get the word out that she was starting a chapter on campus for a conservative student organization Turning Point USA, The College Fix reported.

“In doing so, Sofie did not block any sidewalks, impede traffic, hinder instruction, or in any way disrupt the campus educational environment,” ADF noted in a Monday letter to the college’s chancellor Dean Van Galen. “She stayed only in public outdoor areas where other students often walk and talk.”

More from the ADF letter:

Even so, UW-River Falls Conference and Contract Services Manager Kristin Barstad approached Sofie and told her that she must stop and leave immediately. When Sofie asked why and what policy forbade her from speaking, Ms. Barstad was unable to cite a specific policy but stated that even though Sofie was a student she would have to pay to reserve space to engage in expression. The only place she could speak without permission from the University, Sofie was told, is on the public sidewalk on the edge of campus. When asked what the consequences would be if she kept talking with other students without permission, Sofie was told that the police would be called. Under this threat, Sofie reluctantly packed up and returned to her dorm.

Here’s video of the exchange between Salmon and Barstad:

According to the ADF letter, several weeks later Salmon asked via email where she could find the relevant policies on where she was allowed to speak on campus and how to reserve space in the future.

“I was really surprised about this as I’d never heard of these policies and it is confusing me as to how I’m supposed to go about talking with other students without paying a fee or having to book a space,” Salmon wrote to Barstad last November, ADF noted.

But the ADF letter said the “only reply Sofie received was from another administrator advising her on how to form a student club.” When she asked again for information on campus free speech policy, the letter said she “never received a response.”

What is the ADF demanding?

The ADF’s letter says the school’s policies are vague and unconstitutional and, to avoid litigation, officials should permit students to exercise their First Amendment rights without unwarranted restraints.

“The only permission slip students need to speak on public college campuses is the U.S. Constitution,” ADF Legal Counsel Caleb Dalton said. “The First Amendment doesn’t allow a university or college to play favorites or limit free speech to so-called ‘speech zones.’ The current University of Wisconsin–River Falls policies are unconstitutional because they force students to ask permission before speaking and allow school administrators to silence student speech based on viewpoint or other vague, arbitrary reasons.”

Dalton told The College Fix that Salmon “gave the university the opportunity to respond, and they didn’t.”

The ADF letter also asks the university for a written response no later than Feb. 24 identifying the policy used to prohibit Salmon from speaking and agreeing to revise the outdoor facility use policies to ensure that administrators do not prohibit students from speaking spontaneously in public outdoor areas, the law firm added.

How did the college respond?

“At this time, the university is reviewing the letter received from the Alliance Defending Freedom in consultation with the UW System Office of General Counsel,” Fassino said in an email, adding the school would make no further statements at this time, the outlet reported.