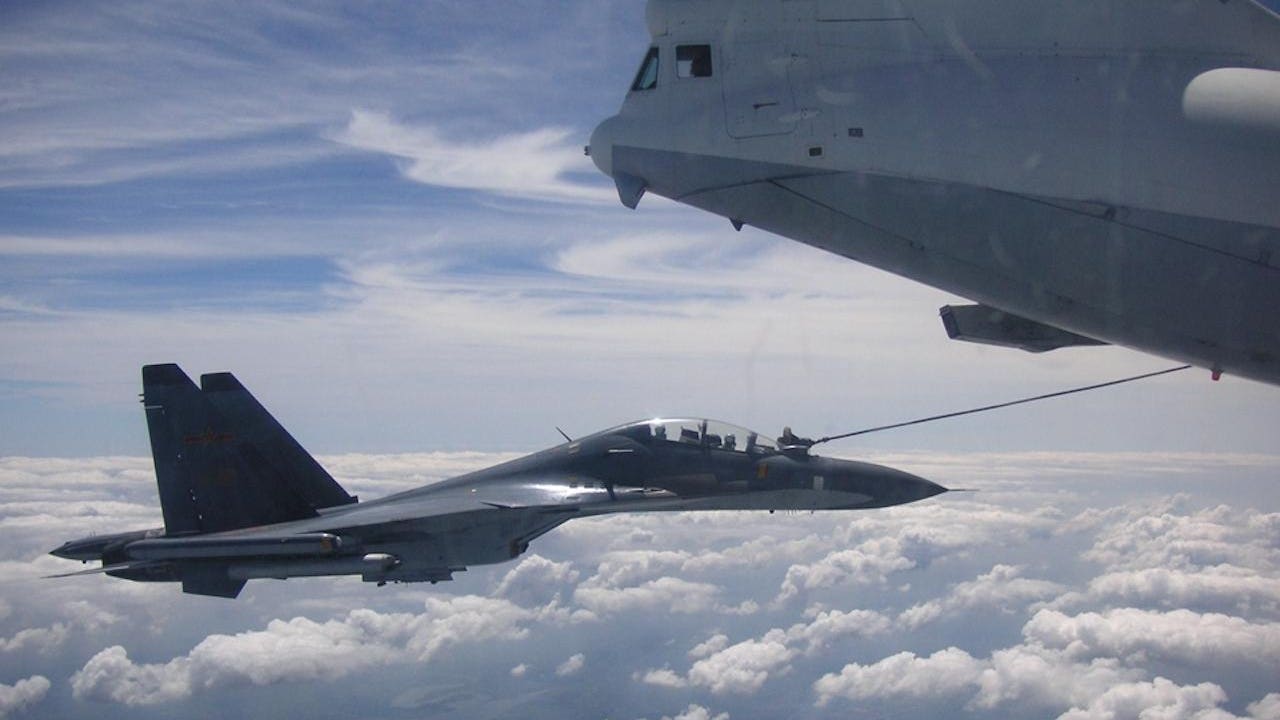 A flight of six Chinese air force Su-30 fighters recently flew from their base in southern China all the way to Subi Reef in the South China Sea and back—a distance of around 1,600 miles.

The 10-hour mission was a dramatic display of the air arm’s ability to project power over the disputed islands of the South China Sea. But the same display also underscored the Chinese air force’s major weakness.

It appears the fighters were either unarmed or very lightly armed. And they seemed to refuel twice from Il-78 tankers—once on the outbound leg, again while inbound.

The mission might have involved two Il-78s. If so, it consumed two-thirds of the People’s Liberation Army Air Force’s heavy tankers. While the Chinese air arm possesses a small number of medium tankers based on the H-6 bomber, these lack range and capacity compared to the three Il-78s. Also, the H-6’s refueling system reportedly is incompatible with the Su-30.

In a way, the PLAAF inadvertently may have demonstrated the limits of its power-projection capabilities. Realistically during wartime, the air force could send at most a couple dozen fighters on long missions over the South China Sea. Those fighters would be lightly armed. And the missions would leave no tankers for other operations.

The Subi Reef mission was the subject of a highly-produced video featurette for Chinese television. Aviation blog Alert 5 obtained a copy.

In the video, crews from the 6th Air Brigade at Nanning air base—near China’s border with Vietnam—race to their twin-seat, twin-engine Su-30s, around 100 of which China bought from Russia in the early 2000s.

As the crews inspect their fighters, it’s apparent that some of them are carrying just one or two air-to-air missiles. Others seem to be unarmed.

The fighters fly in formation over the blue water of the South China Sea. When it’s time to refuel, the Sukhois rendezvous with an Il-78 trailing a refueling basket on a hose. For reasons that aren’t entirely clear, the producers blurred out the Il-78’s fuselage.

The fighter crews continue toward Subi Reef, taking turns sucking down rations from foil packs. The Su-30s descend to low level before turning around and heading home. They hit the tanker one more time before landing.

The payloads and refueling plan make sense. Analysts crunched the numbers and determined that the Australian air force with its seven KC-30 tankers could project just a handful of fully-armed fighters the roughly thousand miles the fighters would need to travel in order to play a meaningful role in a major war with China.

It’s not for no reason that the U.S. military maintains an extensive overseas base network as well as nearly 500 aerial tankers and 11 nuclear-powered aircraft carriers. Distance is the great destroyer of tactical air power. Fighters operating from land bases and without serious tanking support or a network of expeditionary airfields simply can’t travel very far.

That limitation has major implications for China’s ability to fight for its China Seas claims.

It’s getting better for Beijing. The Chinese navy has built two small aircraft carriers and is working on a third. The air force reportedly is developing a tanker version of the new Y-20 airlifter. The People’s Liberation Army has built up a number of island outposts across the China Seas, some of which can support fighters. An outpost on Subi Reef itself includes a lengthy runway.

But the Su-30 mission is a reminder that projecting power is hard. And China’s still not very good at it.