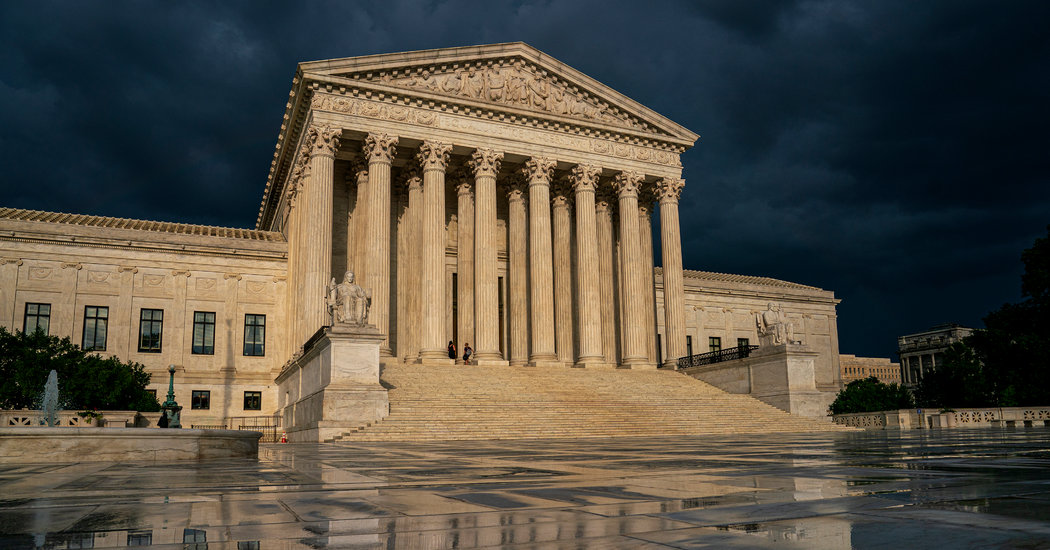 WASHINGTON — The Supreme Court announced Monday that it would postpone its next argument session “in keeping with public health precautions.”

The court was to hear six days of arguments over two weeks starting next Monday, including ones on whether the Manhattan prosecutors and the House of Representatives may obtain President Trump’s financial records.

“The court will examine the options for rescheduling those cases in due course in light of the developing circumstances,” a court spokeswoman, Kathleen Arberg, said in a statement.

The justices will meet for their private conference on Friday, Ms. Arberg said, though some of them “may participate remotely by telephone.”

Several of the justices are in the demographic group thought to be most at risk from the coronavirus: notably Justice Ruth Bader Ginsburg, who turned 87 on Sunday, and Justice Stephen G. Breyer, who is 81. Four additional members of the court — Chief Justice John G. Roberts Jr. and Justices Clarence Thomas, Samuel A. Alito Jr. and Sonia Sotomayor — are 65 or older.

In addition to arguments on the cases concerning Mr. Trump’s financial records, the court also postponed hearings in several other significant cases. One concerns whether Google should have to pay Oracle billions of dollars in a long-running copyright infringement lawsuit over software used to run many of the world’s smartphones.

Also postponed were cases on possible abuses of the No-Fly List, Delaware’s efforts to ensure partisan balance on its courts and how broadly federal employment discrimination laws apply to schools run by churches.

The court closed its building to the public last week, but it remained open for official business. “The court is expanding remote working capabilities to reduce the number of employees in the building, consistent with public health guidance,” Ms. Arberg said on Monday.

The court’s rules ordinarily give parties additional time to file documents when “the court building is closed by order of the court or the chief justice,” but the announcement on Monday said that did not apply to the current partial closure and that “filing deadlines are not extended.”

By longstanding practice, the court generally decides all pending cases before the justices leave for their summer break in late June or early July. There was no indication on Monday that the court was prepared to alter that practice.

Nor did the court indicate that it was exploring technological solutions. The court has never allowed camera or live audio coverage of its arguments. It has on rare occasions released same-day audio, though it usually waits until the end of the week to do so.

The court’s next scheduled argument session, the last of the current term, is scheduled to begin on April 20 and end on April 29. It would be theoretically possible for the court to hear the postponed arguments then, though it would require many of them to be heard in the afternoon.

There appears to be no reason aside from longstanding custom that the court could not decide all of the remaining cases without oral arguments, relying only on written submissions. The court rules on petitions seeking review and emergency applications without hearing oral arguments, and federal appeals courts frequently decide appeals based solely on the parties’ briefs.

The last time it did was in 2012, in response to Hurricane Sandy, and then only for two days. In 2001, after the court’s mailroom was contaminated by anthrax, the justices heard arguments for a week at the nearby E. Barrett Prettyman United States Court House.

“The court’s postponement of argument sessions in light of public health concerns is not unprecedented,” Ms. Arberg said. “The court postponed scheduled arguments for October 1918 in response to the Spanish flu epidemic. The court also shortened its argument calendars in August 1793 and August 1798 in response to yellow fever outbreaks.”

Explaining the decision to postpone arguments during the 1918 epidemic, Justice Oliver Wendell Holmes said the court wanted to spare lawyers from exposure to “this crowded and infected place.”