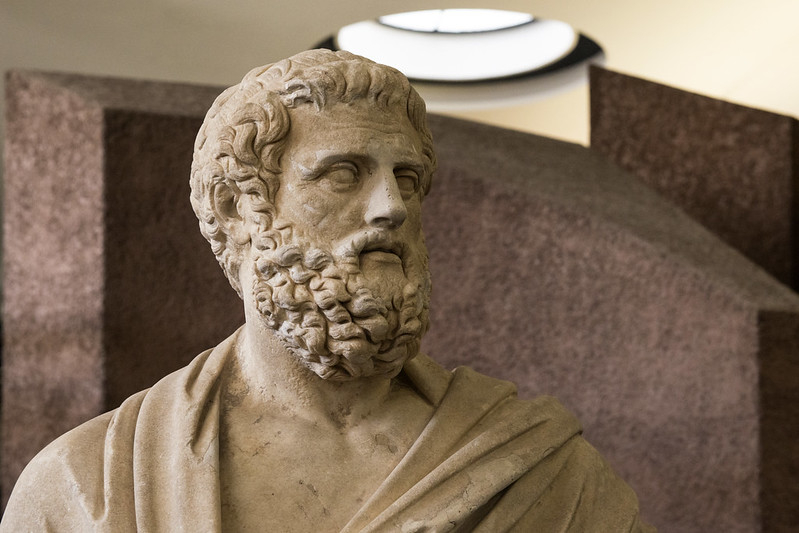 I just re-read some of this series, and… I’ve wandered off into the weeds. What can I say? It happens (at least with me). I began by wondering how patriots can retake their country back, and here I am talking about a 2400 year old Greek play about a guy who kills his father and marries his mother.

The thing is, I have to finish this little digression off before charging back on to the main path with the lessons learned. So let’s finish up Oedipus Rex.

Last time, we left off with Teiresias announcing that King Oedipus himself is the murderer of his predecessor, Laius.

For Oedipus, Teiresias’s claim is not only preposterous and defamatory—it is transparently impossible. The previous king was dead before Oedipus even got near Thebes. He never even laid eyes on his predecessor. An outraged Oedipus concludes the old seer and his brother-in-law Creon are conspiring to seize power. They first killed Laius. Now Teiresias is publicly blaming him for their deed. If they succeed, the city will remain cursed and Oedipus will be exiled—or worse. And Creon will become king.

Queen Jocasta tries to calm Oedipus down. Her brother Creon is no traitor, she says. And Teiresias should be ignored altogether. “Human beings have no part in the craft of prophecy”, she says. Prophecies are all a big fraud.

As proof, Jocasta reports that the Delphic oracle once told her late husband he’d be killed by his own son. But that prophecy proved false—Laius wasn’t killed by his son. It was (or so she was told) highway robbers who killed him at a three way crossroads (which is now paved, but which you can see here in this cool pic!) out near Phocis.

Jocasta’s report brings Oedipus up short. The crossroad near Phocis is precisely where he had killed the aggressive chariot driver years earlier.

Now alarmed, Oedipus launches a full investigation. As the clues accrue, a rattled Jocasta begs him to stop his inquiries.

But Oedipus refuses. For him, only the truth will do—not least because the survival of the city itself depends on it. He simply must bring Laius’s murderer to justice for the plague to disappear.

And it is here I pause to point something out. The standard interpretation of Oedipus Rex is that, along with almost all other Greek tragedies, it’s about a hero undone by a tragic flaw. Oedipus’s tragic flaw is allegedly ὕβρις, or hubris: a kind of spectacular, blinding arrogance.

Proponents of this view claim the young Oedipus manifests hubris when he tries to escape his fate; when, in exasperation, he tries to goad the reluctant Teiresias into identifying Laius’s murderer; when he accuses Creon of plotting against him; and when he rejects Jocasta’s warnings to stop investigating. They conclude that because of a hubris he cannot or will not correct, Oedipus gets what he deserves, the end.

But this is all nonsense—a modern superstition tracing back to a misreading of Aristotle’s comments in Poetics. The play’s text is clear: What Sophocles actually shows is a man who, at every stage, has tried to do the right thing.

It is the desire to do the right thing—not hubris—which convinces young Oedipus to travel far away from home after hearing from the oracle. The prophecy has horrified him. He doesn’t want to kill his father—he loves and admires his father. Nor does he want to marry his mother—he knows that would be an abomination. He will not risk doing evil by returning.

Sophocles repeatedly reinforces Oedipus’s decency, beginning with the opening scene. There, the priest—speaking on behalf of the city residents—describes King Oedipus as “noble” and “wise above all other men to read life’s riddles and the hidden ways of heaven”. Oedipus is the city’s “saviour”. God himself, reveals the priest, has been Oedipus’s ally in liberating and ruling the city. The people revere him. At several points, even the chorus joins in on the praise:

Until the charge is proved, I will not credit his accusers
I saw myself how the Sphinx challenged him
He proved his wisdom; he saved our city
Therefore, how can I now condemn him?

Oedipus lashes out at Creon and the reluctant Teiresias because his people are dying; he’s trying to save them from the plague by bringing Laius’s murderer to justice. This is why he ignores Jocasta’s pleas to leave the crime unsolved. He knows that seeking out the truth might well ruin him. Yet he seeks it out anyway. Why? Because it’s the right thing to do.

And in the end, doing the right thing is what ruins him. That’s the tragedy. Precisely because he finally, as per his moral obligation, discovers the murderer, his happy life collapses. His horrified wife and mother hangs herself. The city which revered him now sees him as a grotesque pollution. Oedipus gouges his own eyes out in anguish. He loses his kingship and winds up in exile. It’s a theatrical depiction of no good deed goes unpunished…but you have to do good deeds anyway.

In other words, Oedipus Rex is actually far more of a tragedy than “hubris theory” makes it out to be. In that version, it’s a story about a man getting what he deserves for moral failings he won’t correct. But what’s so tragic about that? Most of us adore stories in which moral failings are punished in the end. Far from being tragic, that’s nearly the definition of an emotionally satisfactory—maybe even a happy—ending. He got what he deserved. Yay.

No—the real tragedy of Oedipus Rex isn’t that a flawed man meets justice for a moral failing he refuses to correct. It’s that a man earnestly trying to do the right thing suffers ruin from factors beyond his control—in fact, precisely from the consequences of actions which goodness requires, and which he therefore takes.

Oedipus’s flaw isn’t a moral shortcoming. It is a constraint of being human, like not being able to fly or breathe underwater. His “flaw” is simply that he lacks important knowledge. And he lacks it because, as a mortal, there’s no way for him to not lack it. To paraphrase Paul’s comment to the Corinthians, Oedipus—like everyone else—sees through a glass darkly. What we saw with Thucydides’s Pericles, we see again with Oedipus: even where a man has the best intentions, and makes conscientious intentions with the best information, he’s never far from failure, or even catastrophe. Tragedy is built into human existence.

Put another way: Sophocles makes clear we are agents. We make decisions. To some extent, we are all the authors of our own stories.

But there is some level at which we aren’t the authors of our own stories, and never can be. We are bound within a reality we can never come close to mastering. As a result, much about our stories, ultimately, will always remain out of our hands, even where we are noble, wise, and diligent. From a deeply human perspective, that is something tragic.

As ABBA would sing many years later:

The Gods may throw the dice, their minds as cold as ice
And someone way down here loses someone dear

Why, yes, Sophocles would say. That’s life. We are only men. Things can always fall apart. Quite often, they do. All the more reason to always keep in mind our limitations, as Clint Eastwood famously said. That’s the best we can do to lower the odds of catastrophe.

Alas, that is just the thing that’s so hard for us humans to do. The origins of our current social and political struggles are testament enough to that. More on that next time as we charge back to our main path of inquiry.

Tal will be back here next week to continue the conversation. If you can’t wait that long, he’ll be performing alongside Randy Bachman tonight over at Bachman and Bachman, starting at 9pm ET.

Mark Steyn Club members can weigh in on this column in the comment section below, one of many perks of club membership, which you can check out here.

News DSMW - July 29, 2021
0
They say everything is bigger in Texas--but when it comes to Jared Padalecki's home--he prefers a more cozy setting. The Supernatural alum, along with his wife Genevieve... ...

News DSMW - July 29, 2021
0
One of the city’s most powerful law firms has reaffirmed its commitment to downtown Manhattan with the largest FiDi-area office deal since the start of the pandemic and the largest in the city this year. Fried, Frank, Harris, Shriver & Jacobson  renewed its 400,000 square-foot lease for more than 10 years...
MORE STORIES