In this first anniversary of the Fifteen Days to Flatten the Curve, I looked back to what SteynOnline was leading with one year ago:

Is there nothing this virus can’t do?

The entire western world’s testicular fortitude has been on hold ever since. Also from SteynOnline a year ago:

A national tragedy is unfolding in Italy. Meanwhile, China has no new domestic infections and has re-opened Wuhan. Having successfully exported it to every other country, they’re now the only nation without it. Hmm, that couldn’t have gone any better had they planned it…

~With all this bad news, we could all use some cheering up, something to bring us all together. So it’s a great pleasure to present your heartwarming headline of the day:

~Whenever I so much as mention the above pair, I get a ton of emails from US readers saying, “Steyn, we Americans fought a war so that we didn’t have to be interested in the goings on of tight-assed inbred Brit royals. Enough with it already.”

But the Markles isn’t really a royal story, is it? It’s part of the same phenomenon I talked about with Tucker the other night – the export of all-American woke wankery to the rest of the west that M Macron, no monarchist, has identified as an existential threat to the French republic. Thus the headline the New York Post editors have appended to Douglas Murray’s column:

America’s culture wars are an export the rest of the world doesn’t thank you for — especially we Britons, who are now saddled with a living embodiment of those wars in the figure of Meghan Markle.

By sending her our way, American culture has fired a woke missile right into the heart of the British establishment. She’s a one-woman family destroyer, only in this case, the family in question happens to form one of Europe’s most venerable and ancient institutions.

America is buggered because everything now and forever is about race – or rather “race”: the country has a unique and tragic history in this respect, quite different from Britain’s or Europe’s, but the present obsessions of academe and media are no aid to healing those wounds because the unending “national conversation” is fundamentally dishonest. So dishonest that half the country believes the political divide in the United States is between the Democrats and the “white supremacists”, even though the latter (whoever they are) are so supremely supremacist that every cultural lever is entirely controlled by the über-woke – media and showbiz, the corporations, the schools and churches, the Boy Scouts and the military. So we have a national discourse that is utterly fraudulent, and thus, even at its least harmful, totally useless and extremely time-consuming. And just as America’s unique prism is applied by the ignorant Markles to the Commonwealth, so that racial prism has advanced to orientations and genders and the rest of the great panoply of identity politics and its attendant grievances.

One of the advantages that China has is that it doesn’t have to waste a minute on this rubbish. Which frees up a lot of time for taking over the planet. Of course, China has no freedom of speech – but that’s less of a difference than you might think when the land of the First Amendment is determined to force every event into a false paradigm. Thus, when a lone crazy tells investigators he is a “sex addict” and needed to “eliminate” the “temptation” by shooting up three massage parlors and killing six Asian and two white women, multiple Democrat legislators stampede to the microphones to denounce it as the latest outbreak of “white supremacy“.

~As you know, until the ChiCom-19 put an end to international travel, I liked to venture hither and yon and take a break from this rubbish. It’s very pleasant to be in, say, Finland or Slovenia where all the time consumed in America by identity-grievance bollocks is freed up to talk about other stuff. You’d be amazed how much you learn – although America’s place in the international schoolhouse hit parade ought to give a clue to what happens to education when you prioritize identity politics over math or Latin.

My general rule these days is that, in Christendom, you have to go east to find what’s left of the west. The peoples of Central and Eastern Europe, being only a third of a century liberated from prison states, retain enough societal memory not to be seduced by nouveau cultural Marxism. In Western Europe, it’s a bit spottier, but the French educrats denouncing wokeness would be ending their careers if they tried it here. Then come Britannia and her lion cubs: The UK, Canada, Australia, New Zealand have a press that traditionally hoots, “Can you believe what those crazy Yanks are up to now?” – before pathetically adopting all the craziness two, three, five years later.

But leading the charge, because of its general money-no-object approach to what other societies would regard as fringe indulgences, is the United States. It is America, not France or Hungary, that decided to abolish biological sex – and, indeed, to abolish biology, to the point where US birth certificates now cheerfully list a wee bairn’s three fathers.

As China gave the world the WuFlu, America exports the Woke Flu. Which, on balance, is likely to prove more fatal.

~Which brings us back to Meghan the Missile fired into the heart of Windsor Castle. She is determined to impose toxic American identity-politics woke wankery on her gelded hubby’s family, no matter its stupidity and irrelevance. Hers is a hideous solipsistic inversion of Princess Elizabeth’s pledge of Royal duty to our great imperial family all those years ago in South Africa.

The aged Queen and her near centenarian husband have kept that pledge. Whatever criticisms one might lob their way, the 21st-century monarchy is a genuine post-racial institution. Here is Her Majesty throwing a ninetieth birthday lunch at the Palace for various of her viceroys: 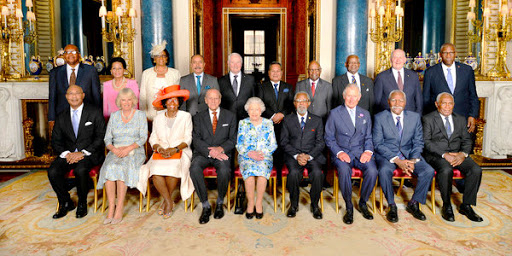 See a lot of white folks there? Other than David Johnston, Governor General of Canada (back row, fifth from left), and Sir Peter Cosgrove, Governor-General of Australia (back row, second from right)?

That’s the life of a working queen, not someone with nothing to do but negotiate seven-figure interviews with Oprah.

Saying you need to flee the Royal Family to find yourself is one thing. When “finding yourself” involves something as adolescent as holing up in Tinseltown and hawking your alleged royalness to grub around the fringes of showbiz, that’s just pathetic.

~One final thought on the vile Markles. Listening to Meghan whingeing about how nobody taught her how to curtsey, I found myself rolling my eyes as one does with children going through a particularly teenagey phase. And then I thought: Hang on, how old are these two anyway?

The dreary Duchess is just shy of forty – thirty-nine years and seven months. The gelding is thirty-six years and six months.

Both are older than Diana was at the time she left the Paris Ritz with Dodi Fayed and neglected to buckle her seat belt.

It’s weird to watch a couple approaching middle age talk like a pair of angst-ridden youths.

But then that too is a characteristic of the Age of Woke. Our society is dying childishly.

~Tomorrow, Friday, I’ll be here with the weekend edition of The Mark Steyn Show. Hope you’ll swing by. If you’re in the mood for our Saturday movie date a little early, please do check out our new home page for the late Kathy Shaidle’s magnificent essays on film and film-makers. We think you’ll like it.

~We opened The Mark Steyn Club over three-and-a-half years ago, and I’m thrilled by all those SteynOnline supporters across the globe – from Fargo to Fiji, Vancouver to Vanuatu, Surrey to the Solomon Islands – who’ve signed up to be a part of it. My only regret is that we didn’t launch it eighteen years ago, but better late than never. You can find more information about the Club here – and, if you’ve a pal who might be partial to this sort of thing, don’t forget our special Gift Membership.

Oh, and if you’re seriously chafing as Year Two of the Permanent Abnormal begins, there’s no better cure than a berth on our Third Annual Steyn Cruise sailing the Med this fall – and with Conrad Black, Michele Bachmann, John O’Sullivan and Douglas Murray among our shipmates. We’ll be attempting some seaboard versions of The Mark Steyn Show, Tales for Our Time, our Sunday Poem and other favorite features. If you’re minded to give it a go, don’t leave it too late: as with most travel and accommodations, the price is more favorable the earlier you book.