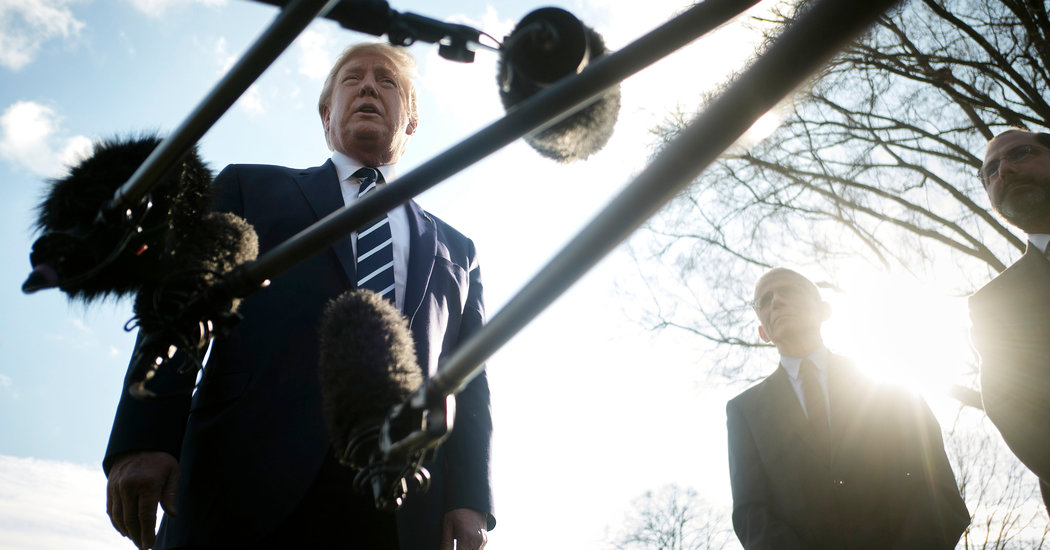 With just eight months until Election Day, President Trump is having a bad week.

Despite his concerted efforts to paint Joseph R. Biden Jr. as corrupt — an attempt that led directly to Mr. Trump’s own impeachment — the former vice president pulled off one of the most remarkable political comebacks in recent history on Tuesday night, re-emerging as the front-runner for the Democratic presidential nomination and Mr. Trump’s opponent in November.

The stock markets tumbled again on Tuesday amid fears about the continuing spread of the coronavirus around the world, and by midmorning Wednesday, yet another case of the virus was confirmed in New York.

But futures markets bounced up with the news of Mr. Biden’s victories, after he won states across the South and the Midwest by large margins and dealt a serious blow to the prospects of Senator Bernie Sanders.

For Mr. Trump, whose belief in his own ability to shape external events is a source of comfort, it now means confronting a moment when almost nothing is in his control.

He has dealt with the coronavirus, the first external crisis of his administration, by repeating a string of falsehoods rather than delivering reassurance. And his insistence that his administration deserves an “A+++” for its response has done little to calm the rattled markets or an anxious electorate.

Mr. Biden even won the primary in Texas, a state that several Trump advisers saw as a bellwether given the makeup of its electorate.

There has long been a disconnect between the way Mr. Trump sees politics and the way his more seasoned advisers do. Privately, several advisers said on Wednesday that they were not surprised that voters coalesced around Mr. Biden, even if the president was.

And they anticipated an ugly slog of a campaign going forward, with the brutal 2016 general election race against Hillary Clinton serving as a reminder of how Mr. Trump will try to damage his rivals, even as voters on Tuesday appeared to favor a candidate who projected calm stability over upheaval and uncertainty.

A sign of Mr. Trump’s frustration over Tuesday’s results was evident in one of his early-morning Twitter posts on Wednesday — a screed against Jeff Sessions, the former attorney general who was forced into a runoff for his old Senate seat in Alabama, and whom Mr. Trump still blames for the two-year inquiry into a possible conspiracy between the president’s 2016 campaign and Russian officials.

“This is what happens to someone who loyally gets appointed Attorney General of the United States & then doesn’t have the wisdom or courage to stare down & end the phony Russia Witch Hunt. Recuses himself on FIRST DAY in office, and the Mueller Scam begins!” Mr. Trump tweeted, after Mr. Sessions fell short of securing a majority in the Republican primary.

In a moment of uncertainty, Mr. Trump appeared to be grasping at the equivalent of comfort food: attacking Mr. Sessions. It was also a way for the president to highlight a race in which his sustained attacks on Mr. Sessions before the campaign ultimately affected his ability to cleanly win the race.

It was also clear that as the Democrats dealt with their own divisions, Mr. Trump’s attempt to dictate the contours of their race has had little comparable effect.

For months, Mr. Trump has told aides he believes he can shape the Democratic race to his own advantage by focusing on specific candidates. And he has been more overt than any incumbent in trying to influence the nominating contest of another party, training his Twitter feed on his potential rivals and trying to deepen authentic divisions in the Democratic Party by stoking fears that the establishment was trying to rob Mr. Sanders of the nomination.

In January, he floated the idea that the Senate impeachment trial was intended to keep Mr. Sanders grounded in Washington instead of campaigning in Iowa before the caucuses there.

“They are rigging the election again against Bernie Sanders, just like last time, only even more obviously,” Mr. Trump tweeted. That month, Trump aides also began to see Mr. Sanders as their ideal Democratic opponent in November and sought to elevate his profile.

The president began singling out Mr. Sanders at his “Keep America Great” rallies as well as on Twitter. “Bernie is going up,” Mr. Trump said in January at a rally in Toledo, Ohio. “He’s surging. Crazy Bernie, he’s surging.” He has also highlighted the senator’s surges in the polls.

Another target was Michael R. Bloomberg, a longtime rival from New York who had no compunction contrasting his wealth with Mr. Trump’s.

On Tuesday, as polls opened in 14 states, the president tried a directive to voters in Texas and Oklahoma: “Mini Mike Bloomberg will kill your drilling, fracking and pipelines,” he tweeted. “Petroleum based ‘anything’ is dead. Energy jobs gone. Don’t vote for Mini Mike!”

Mr. Bloomberg’s withdrawal from the race on Wednesday morning may provide Mr. Trump with a small measure of comfort. But it also presents a looming challenge for his campaign, as Mr. Bloomberg has promised to spend $1 billion to help the Democratic presidential nominee and immediately threw his support to Mr. Biden.

Also a challenge is the surprise surge of a candidate with a genuine connection with African-American voters, the essential element to Mr. Biden’s success on Super Tuesday.

The Trump campaign has recently put money and time into trying to expand the president’s popularity among African-American voters, employing tactics like opening up storefronts in black neighborhoods and devoting a Super Bowl ad to overhauling the criminal justice system. In 2016, Mr. Trump won only 8 percent of the black vote, but his campaign operatives thought that facing a candidate like Mr. Sanders, who had to work to win over African-American voters, created an opportunity for Mr. Trump.

But for months, Mr. Biden’s younger son, Hunter Biden, and his work for Burisma, a problem-plagued energy company in Ukraine, has been the president’s and his advisers’ main concern. That effort was central to the impeachment inquiry into whether Mr. Trump tried to pressure Ukrainians to investigate the Bidens in exchange for releasing military aid.

The damage to the president was obvious, but the former vice president’s candidacy also suffered in the process. His poll standing fell as he struggled to answer questions from reporters and voters about his son.

But the revival of Mr. Biden — who was buoyed by black voters, a core Democratic Party constituency, in several states — illustrates the limits of Mr. Trump’s influence.

“I think Democratic primary voters are numbing to Trump’s buffoonery — black voters in particular,” said Addisu Demissie, who managed Senator Cory Booker’s presidential campaign. “They are the ones who have breathed life back into Biden’s campaign and, if anything, they may relish seeing Biden take him down.”

The only real role that Mr. Trump appeared to play on Tuesday was to ensure that electability was a chief concern for voters.

Geoff Garin, a Democratic pollster, said: “I would describe him as Sideshow Bob in this process. There’s no evidence that he’s commanding a large army of voters who are affecting Democratic primaries.”

Mr. Trump appeared eager on Wednesday to continue his kibbitzing-from-the-sidelines role. “No question on the election?” he asked reporters in the Roosevelt Room, where he was meeting with airline executives about the coronavirus. White House aides quickly shuffled reporters out as the president smiled.