Well, that was exhausting.

One and a half states down, 48.5 to go. Let’s catch you up on what happened during one of the most eventful stretches of the 2020 race so far.

Sanders Won, Klobuchar Surged: What We Learned From New Hampshire

New Hampshire was the first clean test for the Democratic candidates. Here’s an analysis of the results, and what they mean for the race.

So we finally have actual election results from the state of New Hampshire. They are clear, and they are authoritative and they are a little bit complicated. “Hello, America.” “We are here to stay.” “Our campaign is built for the long haul.” “We’re going to Nevada. We’re going to South Carolina. We’re going to win those states as well.” Bernie Sanders has won the state by a little bit. Two other candidates who had quite a strong night — Pete Buttigieg and Amy Klobuchar. Not such a good night for Joe Biden or for Elizabeth Warren or for anybody else. “New Hampshire.” “New Hampshire.” “New Hampshire.” “We’re here together.” “New Hampshire.” “You all up here in New Hampshire.” After the debacle in Iowa, national attention has focused even more intensely on New Hampshire as the first real clean test of political momentum in this race. “People are still undecided.” “Uh, Bernie.” “Bernie Sanders, all the way.” “Mayor Pete.” “Amy Klobuchar.” “Oh, Joe Biden.” “I’ll just probably decide Tuesday, five minutes before I go in to vote.” New Hampshire is a classic swing state. “Ronald Reagan is the winner in the state of New Hampshire.” “Bill Clinton won it.” “It’s neck and neck.” “New Hampshire goes to Obama.” In 2016, Hillary Clinton prevailed over Donald Trump, but by a tiny margin. It’s a state that’s very much in play for 2020. “Four more, Trump. Four more years!” New Hampshire might gauge whether a candidate is able to appeal to certain other constituencies they will need in the general election. We have seen over the last week a real rivalry emerge between Bernie Sanders and Pete Buttigieg. “Hot, fresh and vegan. Get your Bernie-on-a-stick.” New Hampshire is really home turf for Bernie Sanders. He comes from right next door in Vermont. And he also drew strong support, as he did in 2016, from younger voters and more liberal voters. “Young voters want Bernie because he’s fighting for their future. He’s not fighting for his future. He’s in his future.” [cheering] Bernie Sanders came into New Hampshire claiming momentum out of Iowa, based on his lead in the popular vote. “Finally, the votes were counted in Iowa. Took them a little while. We won the vote by 6,000 votes.” He has been somewhat more aggressive with his primary opponents here … “We don’t have a Super PAC.” … talking about the difference between himself … “We don’t want billionaires’ money.” … and candidates in the race, like Pete Buttigieg, who take money from billionaires and other big donors. “We are running a campaign for working people, funded by working people. And that is why we are going to win here in New Hampshire and all over this country.” [cheering] The biggest thing this might mean for Bernie Sanders is that he has clearly reasserted himself as the dominant leader on the left wing of the Democratic Party. And then there’s Pete Buttigieg. “Back in the Obama campaign, we called it ‘no drama Obama,’ and I haven’t come up with the right rhyme for Buttigieg.” [cheering] Pete Buttigieg has claimed, among the moderate candidates, a sense of momentum in New Hampshire that other folks were not able to take. “We can’t risk dividing Americans further. The idea that you’ve either got to be for a revolution or you got to be for the status quo leaves most of us out.” His message here has been pretty similar to his message in Iowa, but really focused on the idea that he’s the candidate who can win crossover support in the general election. “We need a politics that brings all of us in because all of us need a new and better president.” After finishing at the top in both Iowa and New Hampshire, Buttigieg now has a tremendous opportunity to put himself forward at the national level as the leader of moderate Democrats. Announcer: “Senator Amy Klobuchar!” The word that Amy Klobuchar supporters are using to describe what happened here is ‘Klomentum.’ She came to New Hampshire after a fifth-place finish in Iowa without a whole lot of wind in her sails. “It’s been funny suddenly seeing media come to all of our events.” [laughter] Things just turned around for her dramatically. If Klobuchar had not finished so strong in New Hampshire, it might have been the end of her campaign. “If you are tired of the extremes in our politics, and you are tired of the noise and the nonsense, you have a home with me.” She gets the chance to fight onward to Nevada and South Carolina and Super Tuesday. I would not make any plans that are based on knowing a Democratic nominee anytime soon. Well, I am going to Las Vegas next, so I probably would have a chance to do that. 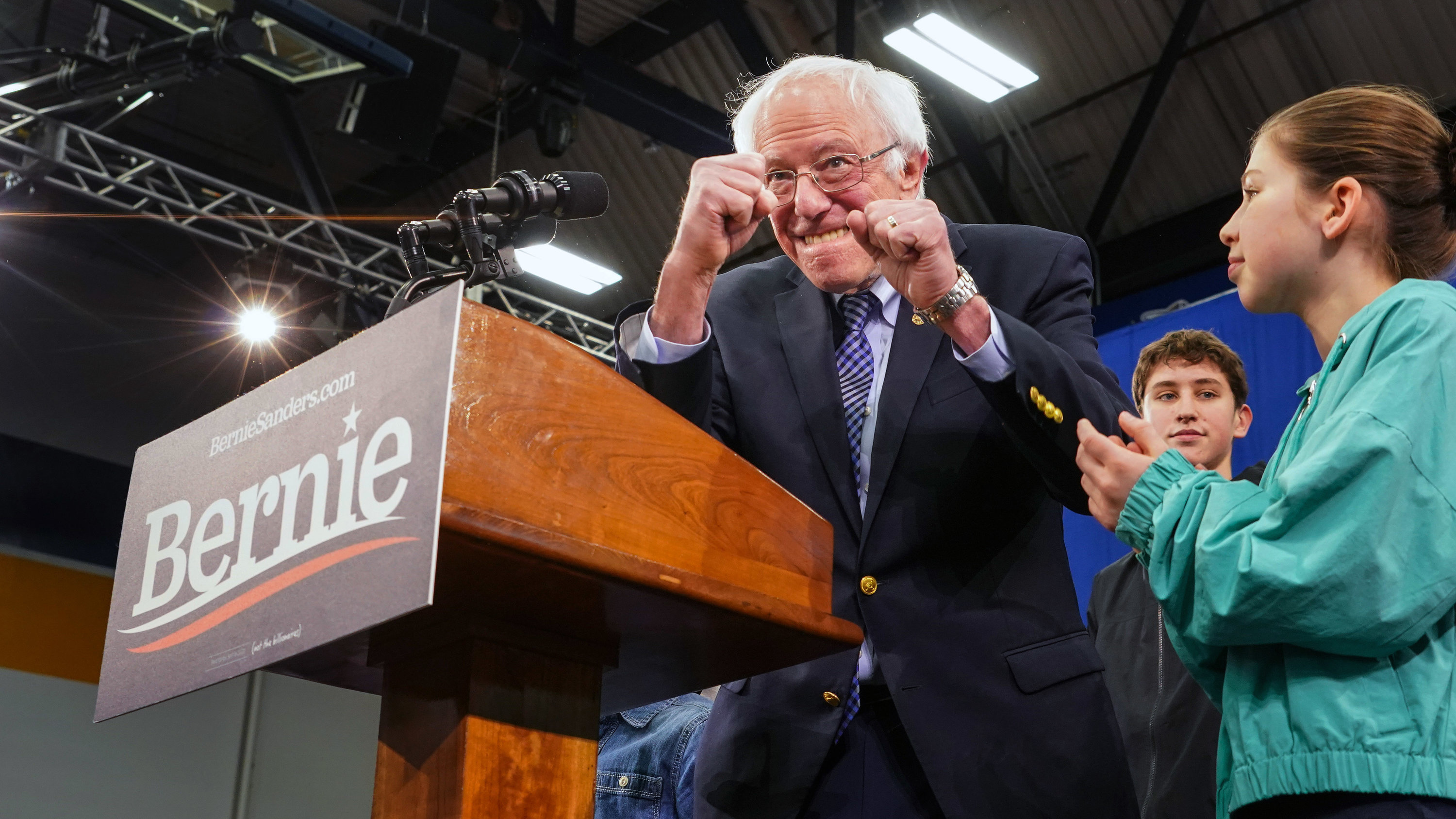 New Hampshire was the first clean test for the Democratic candidates. Here’s an analysis of the results, and what they mean for the race.CreditCredit…Chang W. Lee/The New York Times

That was not great news for Senator Elizabeth Warren of Massachusetts, who placed fourth with less than 10 percent of the vote. And the results were very bad for former Vice President Joseph R. Biden Jr., who finished fifth.

We regret to inform you that we still don’t know who won the Iowa caucuses.

Every precinct has reported its results, and they show Mr. Buttigieg with the slightest of leads over Mr. Sanders in the state delegate equivalent count. But both campaigns requested partial recanvasses this week based on irregularities and miscalculations in specific precincts, and the Iowa Democratic Party agreed to check the numbers.

As recriminations continued to fly, Troy Price, the chairman of the Iowa Democratic Party, announced his resignation on Wednesday. The party will choose an interim leader this weekend.

And then there were eight

‘I Am Suspending My Campaign,’ Yang Says

“I am the math guy, and it is clear tonight from the numbers that we are not going to win this race,” said Andrew Yang, an entrepreneur with no political experience, as he ended his bid for the Democratic nomination on Tuesday night in New Hampshire.

“You know, I am the math guy, and it is clear tonight from the numbers that we are not going to win this race. I am not someone who wants to accept donations and support in a race that we will not win. And so tonight, I am announcing I am suspending my campaign for president.” From crowd: “Aww.” “We love you, Andrew!” “I, I love you too. Thank you, New Hampshire.” “We’ll be back soon. In the meantime, though, thank you all, God bless you, and God bless the United States of America. Thank you for everything. Thank you so much. Thank you.” [music] 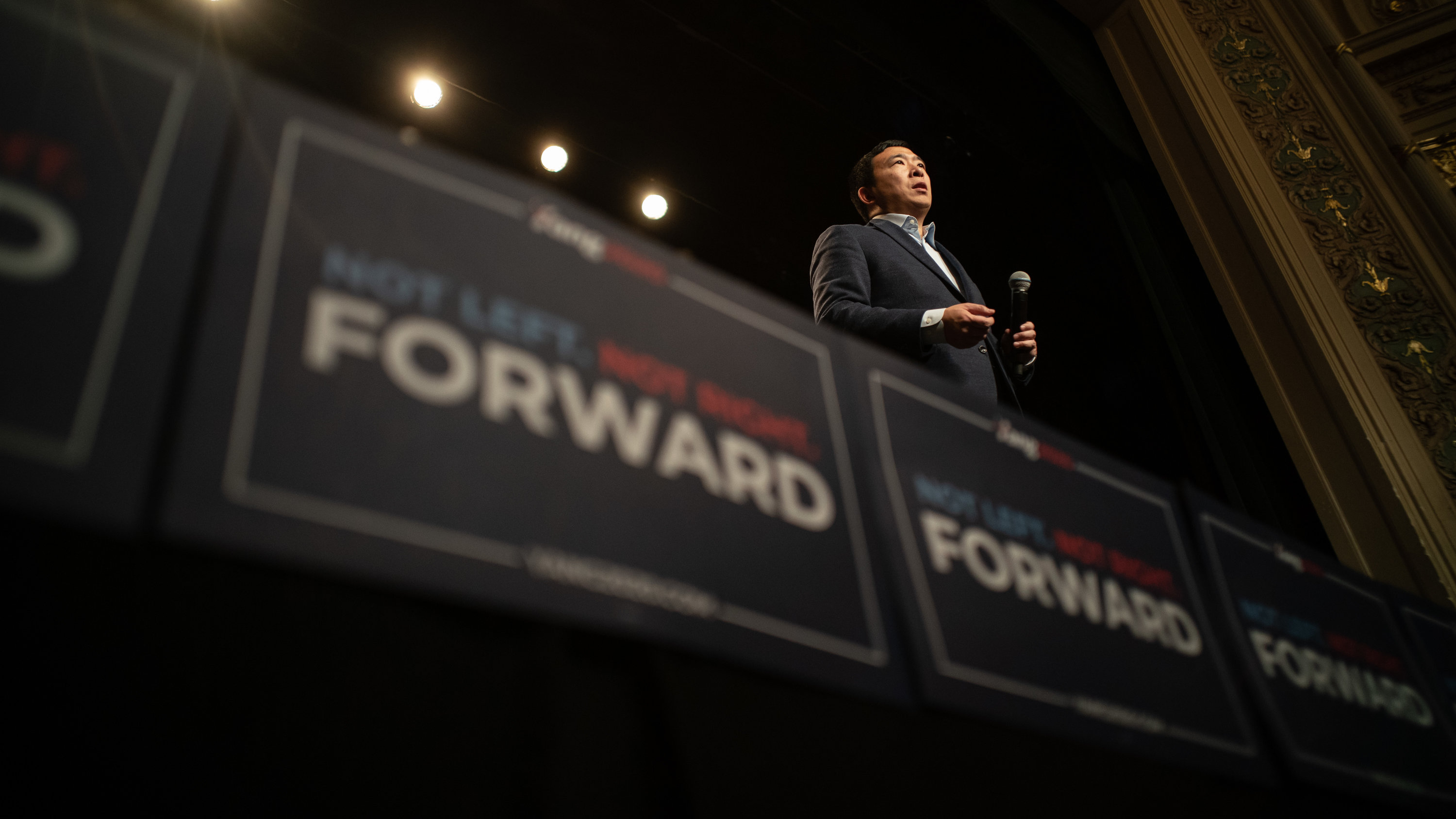 “I am the math guy, and it is clear tonight from the numbers that we are not going to win this race,” said Andrew Yang, an entrepreneur with no political experience, as he ended his bid for the Democratic nomination on Tuesday night in New Hampshire.CreditCredit…Todd Heisler/The New York Times

There are now “only” eight candidates in the Democratic race. That is a huge post-New Hampshire field by any historical standard, but compared with the 24-person free-for-all we had a few months ago, it’s luxuriously manageable.

A bumpy week for Bloomberg

The first recording, which was posted on Twitter on Monday, was from a 2015 appearance Mr. Bloomberg made at the Aspen Institute. In the clip, he staunchly defended stop-and-frisk policing, a tactic that his mayoral administration used disproportionately against black men and Latinos, and that he apologized for only on the eve of his presidential campaign.

“Ninety-five percent of your murders — murderers and murder victims — fit one M.O.,” he said. “You can just take the description, Xerox it and pass it out to all the cops. They are male, minorities, 15 to 25. That’s true in New York, that’s true in virtually every city.”

Later in the week, comments surfaced from a forum Mr. Bloomberg attended in 2008. He claimed the end of redlining, a racially discriminatory housing practice, had helped cause the financial crisis.

A look at the polls

There is no doubt that Mr. Sanders is the new Democratic front-runner, as evidenced not only by his performances in Iowa and New Hampshire but also by two national polls released this week.

A Quinnipiac poll released Monday showed Mr. Sanders at 25 percent, eight points ahead of Mr. Biden — his first lead outside the margin of error in a national debate-qualifying poll. A Monmouth poll released the next day showed an even larger lead, 26 percent to 16 percent.

Mr. Bloomberg released short plans this week on two crucial issues — immigration and reproductive rights — on which the other major candidates long ago announced their positions.

In his immigration plan, he pledged to create a pathway to citizenship for undocumented immigrants, set a target of 125,000 for refugee resettlement and end the backlog of naturalization applications. He also said he would “reform Immigration and Customs Enforcement (ICE) and Customs and Border Protection,” but gave no details.

His reproductive rights plan calls for codifying Roe v. Wade, repealing the Hyde Amendment, and ending the domestic and global “gag rules” — all points on which the Democratic field is united. Mr. Bloomberg also said he would “encourage states” to allow the prescription of birth control through telemedicine and to authorize a wider variety of medical professionals to perform abortions.