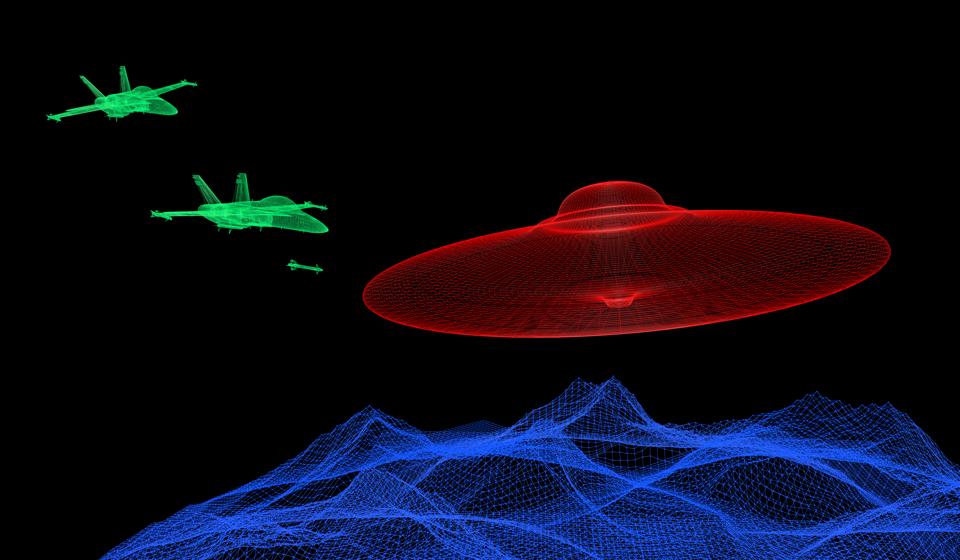 If you follow the universe of unidentified flying object (UFO) sightings at all, you’ve probably already seen the intriguing footage that was officially released by the US Department of Defense this week.

The clips were recorded in 2004 and 2015 by infrared cameras on US Navy aircraft and show what the Pentagon calls “unidentified aerial phenomena” – oblong objects appears to move through the sky in unusual ways. Pilots can be heard on the videos marveling at their speed, sudden movements, how they seem to rotate in mid-air and fly into a substantial headwind with ease.

The unclassified videos have already been circulating for a few years after coming to light in 2017. This week the DoD made them officially available for download in response to an apparent Freedom of Information Act (FOIA) request and a determination that their release did not pose a threat to national security.

Naturally, any UFO footage immediately turns into speculation about aliens, but before making that leap, we need to take a closer look at the evidence.

First off, is it possible that the objects moving in remarkable ways are actually spacecraft constructed by extraterrestrial intelligence? Sure. Anything’s possible and as the phenomena are by definition “unexplained,” all possibilities are on the table.

But there’s a huge gap between a possibility and a probability. And in the case of aliens, our ability to assess UFO or UAP evidence can be clouded by decades of alien imagery from science fiction and pop culture.

This shouldn’t be surprising. Given what we know about the vastness of our universe and how plentiful planets are throughout, it is counter-intuitive that we have no solid evidence of life beyond our little corner of the galaxy.

The problem is that the combination of our strange existential conundrum and inundation with alien storylines sets us up to fall victim to our own confirmation bias. Put another way, we’re wired to go looking for aliens and to convince ourselves we’ve found them if we don’t take a more critical look at the evidence.

Imagine for a second that aliens aren’t a thing. For whatever reason, we know that they did not visit our planet at any point this century. The question is, with that explanation off the table, can we explain what the Navy pilots saw?

Before answering that, let’s first consider what the pilots were actually seeing on their displays. Those are infrared cameras, so they were really seeing heat, which should be a factor in how we interpret what we’re seeing in the videos.

MORE FROM FORBESThe First Alien Life We Find Is More Likely To Be Intelligent Than Not, SETI Expert SaysBy Eric Mack

We can’t even infer from the images without a doubt that there was a solid object in the footage. It’s possible that it was some odd heat mass or other atmospheric phenomena.

And, of course, this is imagery inter-mediated by a computer system that could have had a bug.

One clip in particular shows an object speeding along in a straight line, not unlike a meteor or piece of space debris re-entering the atmosphere.

The fact the videos were released by the military suggests this is not some kind of top secret technology from the US or some other nation, but that also has to be considered as a possible explanation. Heck, maybe it was an elaborate hoax involving drones or something. Who knows.

But with aliens off the table, we’re easily able to come up with several plausible explanations without having to make the giant leap to a phenomena we’ve yet to prove exists.

But still, I’m not saying it’s absolutely not aliens. I’m just saying it’s worth another look before we make that leap.