Zeroing in on the precise source of gunfire is next to impossible in densely packed cities like New York City. Shots reverberate off of building facades, obscuring the shooter’s location and costing law enforcement precious response time. But with a newly installed gunshot detection system, the NYPD will know exactly where those shots are coming from.

Nearly 20 percent of all violent crimes committed in New York City in 2013 (the most recent year for which stats are available) were perpetrated with a firearm — some 4,777 incidents in all. But, according to NYPD Commissioner Bill Bratton, “on average 75 percent of shots fired are never called into 911.” So, as part of its ongoing effort to combat gun crime within the five boroughs, the NYPD recently installed a $1.5 million trial version of the ShotSpotter gunshot detection system in multiple designated test zones throughout the Bronx and Brooklyn. The Bronx test areas have already come online; those in Brooklyn are expected to activate in the near future. 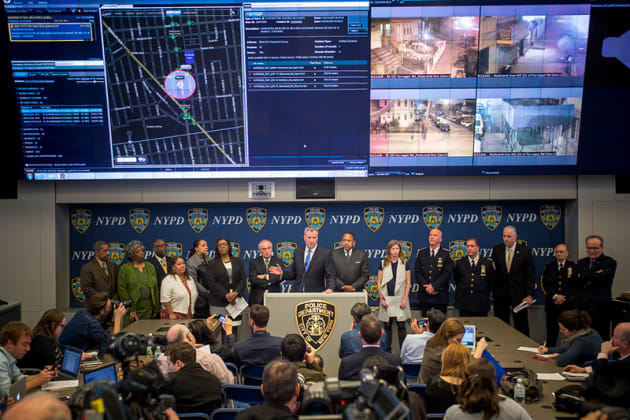 The ShotSpotter trial system relies on 300 audio sensors distributed throughout the 15-square-mile test area. Each sensor is tuned to pick up the distinct crack of gunfire and works with other sensors nearby to triangulate the source of the shot. Once the system detects a potential gunshot, the audio feed is verified by a trained professional and then forwarded on to emergency services via the city’s Domain Awareness System (DAS).

ShotSpotter is reportedly capable of not only recognizing shots and sourcing them to within about 80 feet (roughly half a city block) but also the number of shots, direction of the shooter’s travel and even the number of firearms involved. And unlike previous gunshot detection systems that NYC has experimented with (and abandoned due to flurries of false-positives), ShotSpotter accurately detects shots 80 percent of the time.

“Gunshot detection technology like ShotSpotter will add yet another tool to the NYPD’s technological crimefighting capabilities,” the commissioner said during a press conference. “It will enable us to respond to shooting incidents in a more timely manner, and provide us with the ability to help victims, solve crimes and apprehend dangerous suspects more quickly.”

Should the ShotSpotter system work as advertised, the NYPD said it will integrate the system into the city’s overarching Domain Awareness surveillance scheme. There, the ShotSpotter’s data would be integrated with the city’s 8,000 or so CCTV feeds, NYPD license plate readers, Homeland Security radiation sensors and even 911 reports. That way, when police respond to a 10-10 call (Possible Crime in Progress), they’ll know exactly what they’re getting into before they even reach the scene.