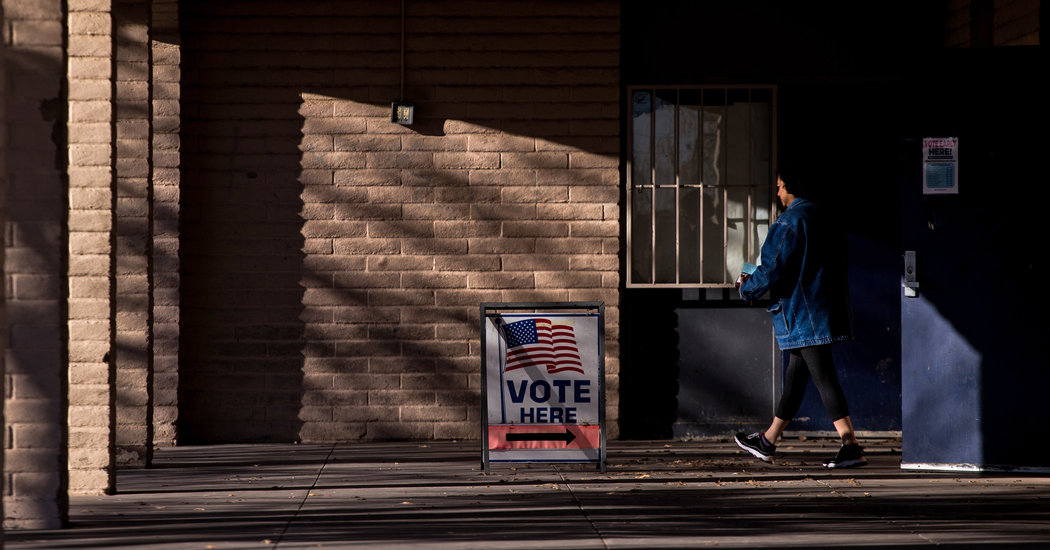 Long overlooked by the political establishment and dismissed as a sleeping giant of a demographic that didn’t vote as reliably as it could, millions of Latinos are expected to go to the polls on Tuesday in key states like Colorado, Virginia, North Carolina and, most significantly, in Texas and California.

One analysis estimates that roughly one-third of the 643 delegates up for grabs in those two states will be determined by Latino voters.

Latinos are expected to make up the largest nonwhite ethnic voting bloc in 2020. Around the country, Latino Democrats are seeking the candidate who is best poised to take on President Trump, who many believe has placed a target on their own backs with his anti-immigrant rhetoric. These voters, far from a monolith but united on some key issues, will cast their ballots in Texas exactly seven months after the deadliest anti-Latino attack in modern American history took place in El Paso.

“It’s hard to be Latino right now,” said Christian Arana, the policy director for the Latino Community Foundation, a philanthropic group based in California. “There are so many of us who feel we have to constantly be on the watch for something terrible. People are channeling their anger into voting in a way we have not seen historically.”

Polls have consistently shown that Latino voters in Texas and California list health care, economic inequality and immigration as their top issues. But the upcoming primaries are likely to show the splits and contradictions among the group. Interviews with dozens of Latino voters in El Paso and Los Angeles in recent days show that though Mr. Sanders has built up a loyal base among Latinos, particularly younger and working-class voters, there are many lifelong Democrats who are still searching for a moderate alternative.

“It’s a historic moment and a historic disappointment because yet again we are the most underinvested community from the establishment and the big donors and yet still in every election, the Latino voting segment keeps growing,” said Héctor Sánchez Barba, the executive director of Mi Familia Vota, which does Latino voter outreach throughout the country. In 2018, Latino voters helped flip several Congressional districts to the Democrats.

Now, he said, is the time Latino groups are pressing to get more promises from candidates on what they will do on health care, education and immigration.

Democratic candidates have made more of an effort in recent weeks to court Latino voters, recognizing the decisive role they could play on Super Tuesday. No other candidate has put more effort into courting Latinos than Senator Bernie Sanders, who has made it clear that he is counting on Latinos as a kind of firewall on Tuesday, nationally and particularly in California. So far, recent surveys seem to reflect that effort: Mr. Sanders has a significant lead among Latino voters in both Texas and California, ahead of his rivals by double digits.

“We’ve lived in fear for our families for the last three years,” said Janette Espino, a 26-year-old sports merchandising buyer from Long Beach, Calif., who attended a rally for Mr. Sanders in Los Angeles Sunday. Ms. Espino said health care was the most important issue for her, but added that she has several family members who are undocumented immigrants. She said several of other family members had become citizens in the last two years and planned to cast their first ballot Tuesday, choosing Mr. Sanders. “We’ve never had a candidate for president who listened to us like this, who we are really excited about.”

Seeming to recognize the need for more of an effort targeting the Latino community, Joseph R. Biden Jr. held rallies in Texas leading up to Super Tuesday, and touted the endorsement of Congresswoman Veronica Escobar of El Paso. And on Saturday, four former Latino cabinet secretaries from the Clinton and Obama administrations published a letter in La Opinion, Los Angeles’ largest Spanish-language newspaper, urging their “Latino brothers and sisters” to vote for Mr. Biden, arguing that they “know Joe” and that he is “running to restore the American dream.”

Like Mr. Sanders’s campaign, Mr. Bloomberg has opened field offices in heavily Latino regions that have long been ignored in presidential elections, such as the Central Valley and the Inland Empire in California. The campaign has also sent millions of campaign mailers to Hispanic voters in both states.

“What used to happen was you avoided talking about Latinos until Florida,” said Mayra Macías, the executive director of Latino Victory Fund, which tries to get more Latinos elected and backed Mr. Biden last month. “Now we are seeing that there is no path to victory without speaking holistically to them.”

In some ways, California Latinos began their steady march to political power after Proposition 187, an anti-immigrant ballot initiative approved by voters in 1994. Dozens of current Latino elected officials in the state became engaged in activism during the protests against the measure, which was eventually struck down by the courts. And many in California believe that Texas Latinos are in the midst of a similar political transformation.

It has now been nearly seven months since the shooting at an El Paso Walmart. The white 21-year-old gunman, Patrick Crusius, turned a Saturday morning in the binational, majority-Hispanic border city into a scene of horror: He killed 22 people and wounded nearly two dozen others. Most of those killed or injured were either Mexicans or Mexican-Americans.

Minutes before the shooting, the gunman had posted an anti-immigrant manifesto online, declaring that the attack was in response to “the Hispanic invasion of Texas.” He wrote that he feared that the Hispanic population in Texas would make it a Democratic stronghold that would “win nearly every presidential election.”

For 27-year-old Elisa Tamayo, the shooting last year was personal. It was her neighborhood Walmart, a place to shop and meet her family from across the border. One of her mother’s friends was killed in the attack — Maria Eugenia Legarreta Rothe, 58, from the Mexican state of Chihuahua. Ms. Tamayo called her “tía,” Spanish for aunt, although they were not related.

But for Ms. Tamayo, the attack has since veered to the political.

She is running for public office for the first time in her life, pushed in part by the Walmart shooting and the rhetoric from President Trump and state Republican leaders that she believes fueled the anti-Latino hatred of the gunman. Ms. Tamayo is vying to become a Democratic lawmaker in the state House of Representatives and to represent the House district that includes the Walmart. She announced her candidacy eight weeks after the shooting, standing with relatives and supporters in front of a mural reading “El Paso Strong.”

Ms. Tamayo, who is on the Democratic primary ballot in El Paso on Tuesday and who voted for Ms. Warren for president, said that in knocking on doors for her campaign, she has seen firsthand a new level of engagement of Hispanic voters.

Around El Paso, many people described similar reasons for voting: Mr. Trump’s rhetoric and the shooting last summer. But they came to different conclusions about their preferred candidates.

Anna Casas, 33, a single mother and home health aide in El Paso, voted for the first time in her life last week — her vote went to Mr. Sanders, and she had registered to vote last year about three months after the attack at the Walmart, where she would often shop with her three sons. “What about if we were there and that happened?” she said. “It did open my eyes. It pushed me to vote.”

Ms. Casas said it was clear to her that Mr. Trump’s words fueled the shooter’s hatred of Hispanics.

“I’m trying to push other people to vote, because they think that their vote doesn’t matter,” she said. “But it actually does. I used to think that way, honestly, until Trump became president.”

Irma Vasquez, 67, a former school-district worker who voted for Mr. Bloomberg, put the role the president’s words played in the attack this way, tugging at the skin on her cheek: “He put a bull’s-eye on our backs, especially this color.”

Pedro Gandara, 74, a retired telephone-company repairman and Air Force veteran who voted for Mr. Biden, said Mr. Trump evokes for him the anti-Latino racism he has faced his entire life. He remembered being refused service at a restaurant in the Panhandle city of Amarillo when he was a high school student.

“This was ’63 or ’64, so the racism has been here ever since, but Trump has really brought it out,” Mr. Gandara said. “He’s very much against us all.”

Perhaps no one exemplified the split of Latino Democratic voters in Texas heading into Super Tuesday better than the Balcazar family.

Last Wednesday, Miguel Balcazar, 66, a retired middle-school history teacher, walked slowly to an early voting site at a recreation center in the city’s Mission Valley neighborhood, a little more than two miles from the scene of the Walmart shooting. He used a cane because of his knee problems as his wife, Lucinda, 65, a retired special-education teacher’s assistant, walked alongside him, just as slowly. They’ve been married for 41 years.

They were making their way cautiously to vote, but they were eager for political revolution. When they got back to their car wearing “I voted” stickers, both said they had supported Mr. Sanders.

“I feel strongly that he’s more radical than anything else,” Mr. Balcazar said of Mr. Sanders.

Their three sons were not with them, but their parents know exactly how they will vote. One of their sons plans on voting for Mr. Sanders, one is undecided and the other will vote for Mr. Trump, a sign of the Hispanic Republican support for the president that exists in a conservative state like Texas.

“I can’t change his mind,” Mr. Balcazar said, shaking his head and adding with a chuckle, “He says, ‘Dad, I’m going to put the sign up on top of your roof, because you can’t get up there anymore.’”