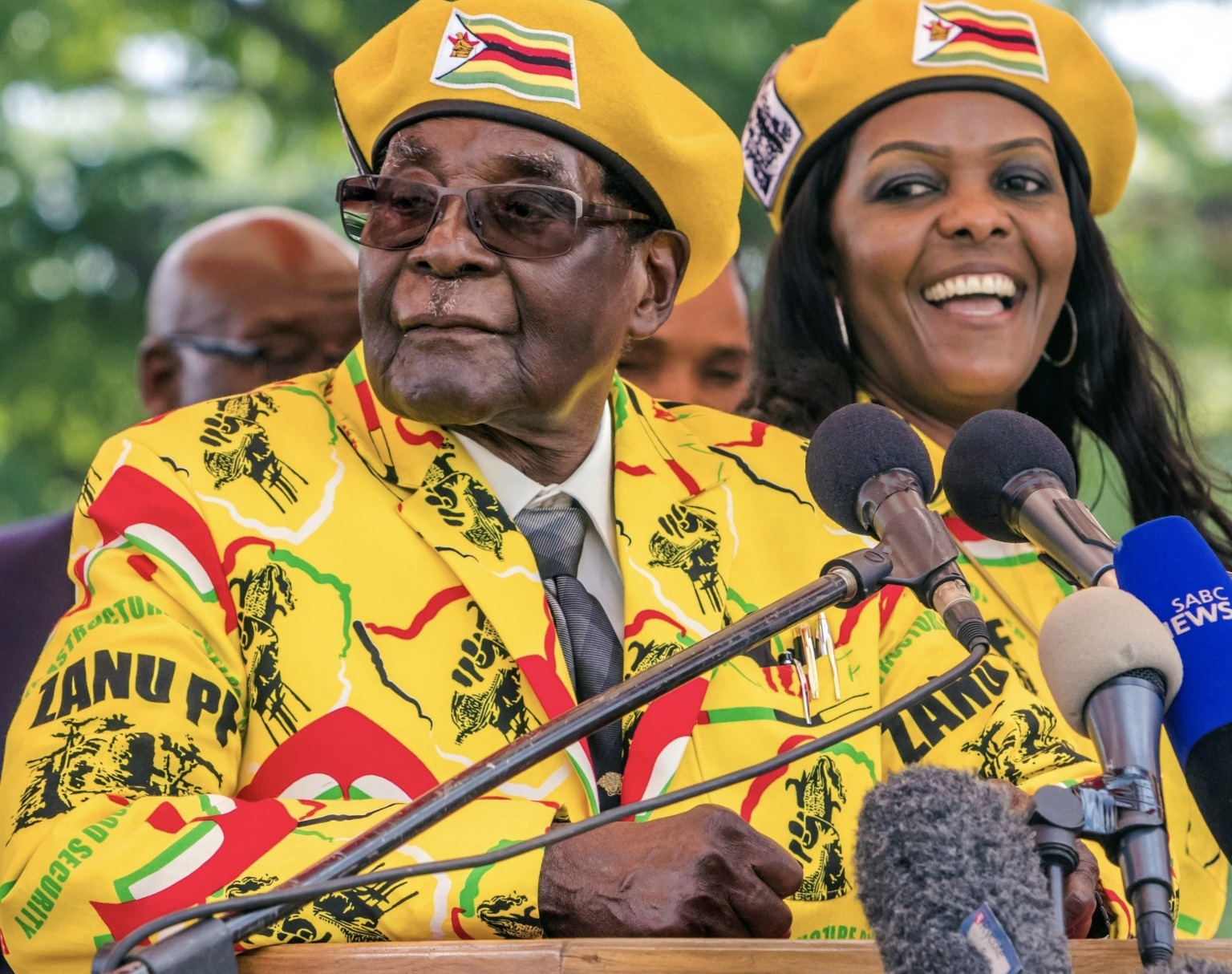 You have given me the jewel of Africa.

Mugabe took the jewel and shattered it, leaving a few splinters and shards strewn across a wasteland. A thuggish and evil man, he had also been given an advantage over the first generation of post-colonial leaders from the Sixties and Seventies: The mistakes were well known and he didn’t have to repeat them.

But he did anyway. And he managed to hang on longer than Nkrumah and Nyerere, Kenyatta and Kaunda and the other Afro-Marxist kleptocrats, holding even more deranged and capricious power until he was forced from office at the age of ninety-three two years ago. He negotiated a very generous departure deal and died this week at the Gleneagles Hospital in Singapore, a medical facility beyond the reach of his unfortunate subjects.

I wrote about the old monster over the years. In 2017 I noted, notwithstanding the mountain of corpses he’d piled up, his abiding status with the “international community”. The World Health Organization, ostensibly one of the least nutty operating units of the UN (compared with, say, the Human Rights Council), had announced that Robert Mugabe was being appointed a WHO “Goodwill Ambassador”:

Mr Mugabe’s idea of “goodwill” is to send his goons round to your farmhouse to announce he’s stealing your land – and, if you’re minded to object, kill your farm workers or wife or kid. When Zimbabwe’s nonagenarian monster goes Goodwill hunting, best not to stand in his path.

Yesterday the WHO was forced to back down. But how did it ever get as far as an official announcement? Mugabe’s greatest contribution to “world health” has been to raise the comparative life expectancy of every other country by dramatically reducing his own over his first quarter-century:

In fairness, this wasn’t accomplished merely through killing people. He also starved his hospitals of basic drugs and materials, while jetting off to Singapore and Kuala Lumpur for the world-class medical treatment that kept him remarkably spry at the age of 93. And thus the monster outlived all those who delivered into his hands that “jewel of Africa”. As I wrote in The National Post in 2002:

After two decades of Mr. Mugabe’s stewardship, per capita income has fallen by half, inflation is running at over 100% and unemployment at 60%, and the government has no idea how to correct any of these lamentable developments except by forcing white farmers off their property and turning productive land to dust. The official position is that the present situation is the fault of the white minority and of Britain.

Indeed. Mr Mugabe accused Her Britannic Majesty’s Government of a secret plan to impose homosexuality throughout the Commonwealth. There’s a conspiracy theory we can all get behind:

‘The Prime Minister is not a gay gangster.’

Back in 1980, Robert Mugabe was a cold but courtly Afro-Marxist. He liked cricket for its “civilizing” influence, he had English hunting scenes on the place mats at Government House, and he spoke in the elegant vowels of a post-war London drawing room, not the flatted tones of the veldt settler. But he had a lot of blood on his hands, and a taste for more than the usual casualties of a “liberation movement”: In 1978, in the Vumba mountains, Mugabe’s plucky “freedom fighters” slaughtered nine white missionaries, after raping the women and their four children – one a month old and another found with a boot imprint on her shattered skull. He was always a vicious killer, and an economic illiterate, and was quite happy to use the former skill to punish victims of the latter. But he was not, as he later appeared to be, stark staring nuts. Many have speculated on the reasons for this. In Zimbabwe, it is widely believed he was driven insane by tertiary syphilis. From my 2002 column:

Reliable sources claim Mr. Mugabe’s manhood has crumbled away to nothing. Last year, George Potgieter, the manager of a Harare engineering company, wound up in court after telling his workers that (according to court records) ‘they had no brains because they were being led by a President who had a rubber penis made in China’. The workers immediately seized Mr. Potgieter and took him to the nearest police station for breaking the Law and Order Maintenance Act, which forbids exposing the President to ‘hatred, contempt or ridicule’.

I’m not sure what extradition arrangements we have with Harare, so let me hasten to add that neither I nor the editors of The National Post are for one minute suggesting Mr Mugabe has a rubber penis — or, if he has, we’re sure it’s very impressive and top of the range, certainly not some factory-made Chinese thing.

And one can quite understand why one would go to Beijing for penile reconstruction rather than trusting such a procedure to what’s left of Zimbabwe’s hospitals after a third of a century in Mugabe’s tender hands.

I’m no shrink, but it seems to me that if one’s twig and berries crumble away to nothing it could conceivably lead one to an unusually intense animus against certain forms of male sex. “We as chiefs should fight against western practices,” he said. “British homosexuals are worse than dogs and pigs.” And Zimbabwe’s homosexuals get jailed. If you’ve read Mark Steyn’s Passing Parade, you’ll know that the Reverend Canaan Banana, Mr Mugabe’s longtime ally in the resistance movement, was eventually convicted and imprisoned for sodomy. In a feeble attempt to restrain Mugabe, at the Lancaster House conference London forced a Westminster-style constitution on the new Zimbabwe, splitting the roles of head of government and head of state. Mugabe became prime minister, and his ZANU-PF party put up the Rev Banana as its choice for president. It is said that Lord Carrington cynically went along with the idea, because it seemed an excellent jest on the recalcitrant white Rhodesians to transform their rebel colony into the first literal Banana republic.

A bodyguard of Mr Banana woke up in the small hours naked from the waist down, with a smiling president hovering over him. “While you were sleeping,” said Banana, “we helped ourselves” – not the words most of us would want to wake up to. Even the 1982 law forbidding jokes about the presidential name couldn’t help him – not with headlines like “Man Raped by Banana” (The Herald), “Banana Forced Officer to Have Sex” (The Guardian), “Banana Appeals Against Sodomy Conviction” (the BBC) and, after he fled to South Africa, “Hand Over Banana, Mandela Told”.

The homophobia was a surprise to his old champions in the imperial metropolis. With his country crumbling away faster than his penis, there was now something for everyone to complain about. On the British right, Mugabe’s assaults on the white farmers vindicated everything they had always said about him. On the British left, it was the rampant homophobia which very belatedly cost him the support of all those champagne socialists who had cheered his rise to power twenty years earlier.

And yet he endured, almost to the end. While Britain and other former colonial powers turned a blind eye to Africa, the likes of Mugabe looted their governments’ treasuries, their countries’ resources, their peoples’ wealth and western taxpayers’ bountiful “development” funds. You still hear African leaders demanding to know why the US won’t set up a “Marshall plan for Africa”, which conveniently overlooks the fact that since 1960 the west has sunk the cost of the Marshall plan many times over into the dark continent with nothing to show for it other than a few extra zeroes on the Swiss bank balances of the dictators-for-life. While the west snoozed complacently, the Afro-Marxist kleptocrats helped themselves, and ransacked a continent: to grease his departure from office, Mugabe insisted on two separate payments of ten million dollars. Public service, Africa-style.

Robert Mugabe knew nothing but how to destroy: he inherited a considerable something, and left a rotted and diseased nothing. In the end, the Chinese-made rubber penis, apocryphal or not, was symbolic. He beggared Rhodesia and faute de mieux turned it into what it is today – a de facto Chinese colony – merely swapping one colonial master for another.

~Join us later today at SteynOnline for Mark at the Movies and tomorrow morning for the latest in our series of Steyn’s Sunday Poems. Steyn’s Sunday Poems is made with the support of members of The Mark Steyn Club: you can sign up for a full year, or a more cautious experimental quarter. Among the other benefits of membership are our Comment Club privileges, so our small but doughty band of Zimbabwean members are more than welcome to log-in and put in a Mugabye-bye of their own.