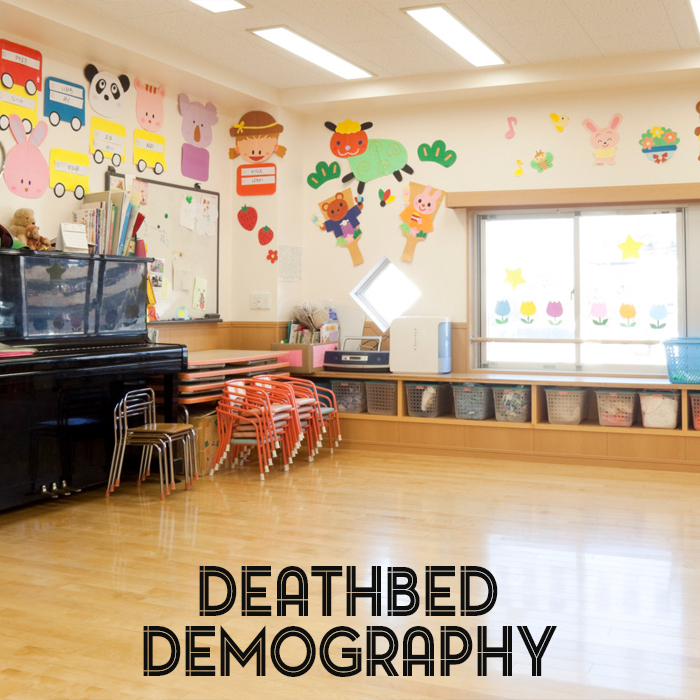 It has taken almost two decades, but the Government of Japan has finally caught up with Steyn:

Japanese prime minister Fumio Kishida spoke in desperate terms about the country’s cratering birth rate in an address to his nation’s parliament on Monday.

“Now or never when it comes to policies regarding births and child-rearing-it is an issue that simply cannot wait any longer,” Prime Minister Kishida said in a speech marking the new parliamentary session. “The number of births dropped below 800,000 last year.

“Japan is standing on the verge of whether we can continue to function as a society,” he added.

The annual number of Japanese newborns is now about forty per cent of what it was in the 1970s: That’s a society that, in Mark’s phrase, is going out of business very fast. Those Japanese that are still around are old – indeed, they are the oldest nation on earth save for tiny Monaco:

The rising cost of living and low immigration has hampered Japan’s ability to elevate its lagging birth rate. Barely 3 percent of the country’s population is foreign-born, compared to over a quarter of Americans.

To the Japanese, a society in which over 25 per cent are foreign-born would no longer be Japanese, and would bring with it a destabilising array of other problems. Here is what Mark had to say seventeen years before the Japanese prime minister, in his 2006 demographic bestseller America Alone: The End of the World as We Know It:

Stick a pin almost anywhere in the map, near or far: The “who” is the best indicator of the what-where-when-why. Remember how it was when you watched TV in the Eighties? You’d be bombarded with commercials warning that the yellow peril was annexing America and pretty soon they’d be speaking Japanese down at the shopping mall. It didn’t happen and it’s never going to happen. In the Nineties, I tended to accept the experts’ line that Japan’s rising sun had gone into eclipse because its economy was riddled with protectionism, cronyism and inefficient special-interest groups. But so what? You could have said the same in the Sixties and Seventies, when the joint was jumping. The only real structural difference between Japan then and Japan now is that the yellow peril got a lot wrinklier. What happened in the 1990s was what Yamada Masahiro of Tokyo’s Gakugei University calls the first “low birth-rate recession”. It’s not the economy, stupid. It’s the stupidity, economists – the stupidity of thinking you can ignore demography. Japanese society aged, and aged societies, by their nature, are more cautious and less dynamic: old people weigh exposure to risk more than potential for gain.

Another example: Will China be the hyperpower of the 21st century? Answer: No. Its population will get old before it’s got rich…

Almost every geopolitical challenge in the years ahead has its roots in demography, but not every demographic crisis will play out the same way. That’s what makes doing anything about it even more problematic – because different countries’ reactions to their own particular domestic circumstances are likely to play out in destabilizing ways on the international scene. In Japan, the demographic crisis exists virtually in laboratory conditions – no complicating factors; in Russia, it will be determined by the country’s relationship with a cramped neighbor – China; and in Europe, the new owners are already in place – like a tenant with a right-to-buy agreement.

Let’s start in the most geriatric jurisdiction on the planet. In Japan, the rising sun has already passed into the next phase of its long sunset: net population loss. 2005 was the first year since records began in which the country had more deaths than births. Japan offers the chance to observe the demographic death spiral in its purest form. It’s a country with no immigration, no significant minorities and no desire for any: just the Japanese, aging and dwindling.

At first it doesn’t sound too bad: compared with the United States, most advanced societies are very crowded. If you’re in a cramped apartment in a noisy congested city, losing a couple hundred thousand seems a fine trade-off. The difficulty, in a modern social democratic state, is managing which people to lose: already, according to The Japan Times, depopulation is “presenting the government with pressing challenges on the social and economic front, including ensuring provision of social security services and securing the labor force.” For one thing, the shortage of children has led to a shortage of obstetricians. Why would any talented ambitious med school student want to go into a field in such precipitous decline?

As a result, if you live in certain parts of Japan, childbirth is all in the timing. On Oki Island, try to time the contractions for Monday morning. That’s when the maternity ward is open – first day of the week, 10am, when an obstetrician flies in to attend to any pregnant mothers who happen to be around. And at 5.30pm she flies out. So, if you’ve been careless enough to time your childbirth for Tuesday through Sunday, you’ll have to climb into a helicopter and zip off to give birth alone in a strange hospital unsurrounded by tiresome loved ones. Do Lamaze classes on Oki now teach you to time your breathing to the whirring of the chopper blades?

The last local obstetrician left the island in 2006 and the health service isn’t expecting any more. Doubtless most of us can recall reading similar stories over the years from remote rural districts in America, Canada, Australia. After all, why would a village of a few hundred people have a great medical system? But Oki has a population of 17,000, and there are still no obstetricians: Birthing is a dying business.

So what will happen? There are a couple of scenarios: Whatever Japanese feelings on immigration, a country with great infrastructure won’t empty out for long, any more than a state-of-the-art factory that goes belly up stays empty for long. At some point, someone else will move in to Japan’s plant.

And the alternative? In P D James’s The Children of Men, there are special dolls for women whose maternal instinct has gone unfulfilled: pretend mothers take their artificial children for walks on the street or to the swings in the park. In Japan, that’s no longer the stuff of dystopian fantasy. At the beginning of the century, the country’s toymakers noticed they had a problem: toys are for children and Japan doesn’t have many. What to do? In 2005, Tomy began marketing a new doll called Yumel – a baby boy with a range of 1,200 phrases designed to serve as companions for the elderly. He says not just the usual things – “I wuv you” – but also asks the questions your grandchildren would ask if you had any: “Why do elephants have long noses?” Yumel joins his friend, the Snuggling Ifbot, a toy designed to have the conversation of a five-year old child which its makers, with the usual Japanese efficiency, have determined is just enough chit-chat to prevent the old folks going senile. It seems an appropriate final comment on the social democratic state: in a childish infantilized self-absorbed society where adults have been stripped of all responsibility, you need never stop playing with toys. We are the children we never had.

And why leave it at that? Is it likely an ever smaller number of young people will want to spend their active years looking after an ever greater number of old people? Or will it be simpler to put all that cutting-edge Japanese technology to good use and take a flier on Mister Roboto and the post-human future? After all, what’s easier for the governing class? Weaning a pampered population off the good life and re-teaching them the lost biological impulse or giving the Sony Corporation a license to become the Cloney Corporation?

If you need to justify it to yourself, you’d grab the graphs and say, well, demographic decline is universal. It’s like industrialization a couple of centuries back; everyone will get to it eventually, but the first to do so will have huge advantages: the relevant comparison is not with England’s early 19th century population surge but with England’s industrial revolution. In the industrial age, manpower was critical. In the new technological age, manpower will be optional – and indeed, if most of the available manpower’s Muslim, it’s actually a disadvantage. As the most advanced society with the most advanced demographic crisis, Japan seems likely to be the first jurisdiction to embrace robots and cloning and embark on the slippery slope to transhumanism.

~The above is excerpted from Mark’s international bestseller America Alone: The End of the World as We Know It. If you haven’t read the book during its first seventeen years, well, you’re missing a treat. It’s still in print in hardback and paperback, and personally autographed copies are exclusively available from the SteynOnline bookstore.

We opened The Mark Steyn Club five-and-a-half years ago, and we’re thrilled by all those SteynOnline supporters across the globe – from Fargo to Fiji, Vancouver to Vanuatu, Surrey to the Solomon Islands – who’ve signed up to be a part of it. Mark’s only regret is that he didn’t launch it twenty years ago, but better late than never. You can find more information about the Club here – and, if you’ve a pal who might be partial to this sort of thing, don’t forget our special Gift Membership. Oh, and we also have a cruise.