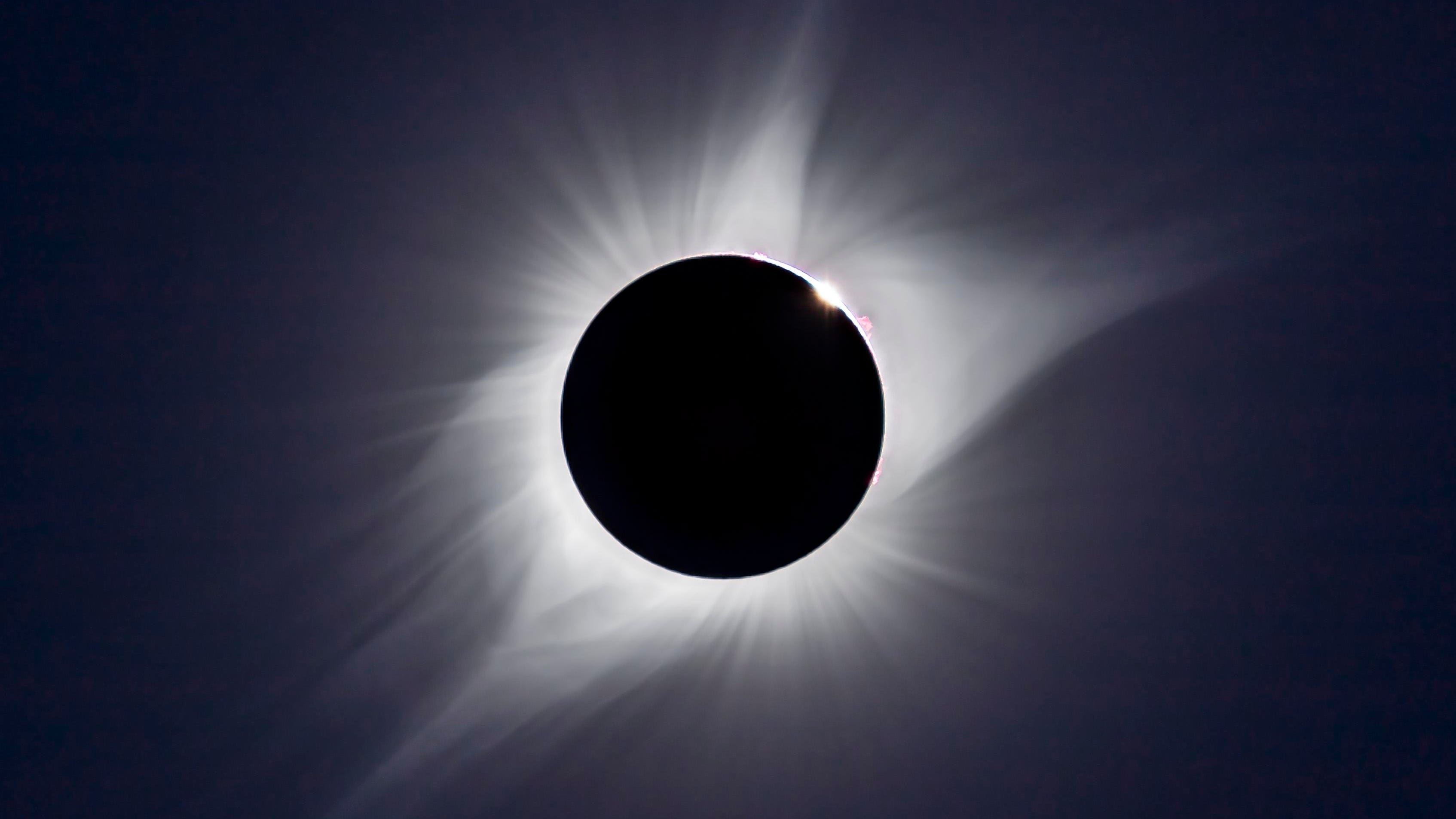 A composite of the August 21, 2017 total solar eclipse showing third contact Ð the end of totality … [+] ÐÊwith sunlight beginning to reappear and the array of pink prominences along the limb of the Sun Seconds later the emerging Sun and diamond ring overwhelmed the large prominence Regulus is at lower left This is a composite of two images taken seconds apart: a 1/15th second exposure for the corona and a 1/1000 sec exposure for the prominences and chromosphere Taken with the 106mm Astro-Physics apo refractor at f/5 and Canon 6D MkII camera at ISO 100 On the Mach One equatorial mount, polar aligned and tracking the sky. (Photo by: VW Pics/Universal Images Group via Getty Images)

While we on Earth suffer from coronavirus, our star—the Sun—is having a lockdown all of its own. Spaceweather.com reports that already there have been 100 days in 2020 when our Sun has displayed zero sunspots.

That makes 2020 the second consecutive year of a record-setting low number of sunspots— which you can see (a complete absence of) here.

Note: never look at the Sun with the naked eye or through binoculars or a telescope that aren’t fitted with solar filters.

So are we in an eternal sunshine of the spotless kind?

The sun is blank–no sunspots.

“This is a sign that solar minimum is underway,” reads SpaceWeather.com. “So far this year, the Sun has been blank 76% of the time, a rate surpassed only once before in the Space Age. Last year, 2019, the Sun was blank 77% of the time. Two consecutive years of record-setting spotlessness adds up to a very deep solar minimum, indeed.”

What does all of this mean? Here’s everything you need to know about the Sun, the solar cycle, and what a deep solar minimum means for us.

MORE FROM FORBESNo, There Won’t Be A ‘Smiley Face’ In The Night Sky In May (But Something Else Will Make You Happy)By Jamie Carter

What is a sunspot?

It’s an area of intense magnetic activity on the surface of the Sun—a storm—that appears as an area of darkness. Sunspots are indicative of solar activity, birthing solar flares and coronal mass ejections (CMEs). Although sunspots seem like tiny specks, they can be colossal in size.

Sunspots have been continuously counted each day since 1838, which has allowed solar scientists to describe a repeating pattern in the wax and wane of activity on the Sun’s surface—the solar cycle.

What is the solar cycle?

The Sun has a cycle that lasts between nine and 14 years—typically 11 years, on average—and right now we’re in the trough. At the peak of that cycle—called solar maximum—the Sun produces more electrons and protons as huge solar flares and coronal mass ejections.

From a visual perspective, the solar cycle is a “sunspot cycle” since solar scientists can gauge where the Sun is in its cycle by counting sunspots on its surface. 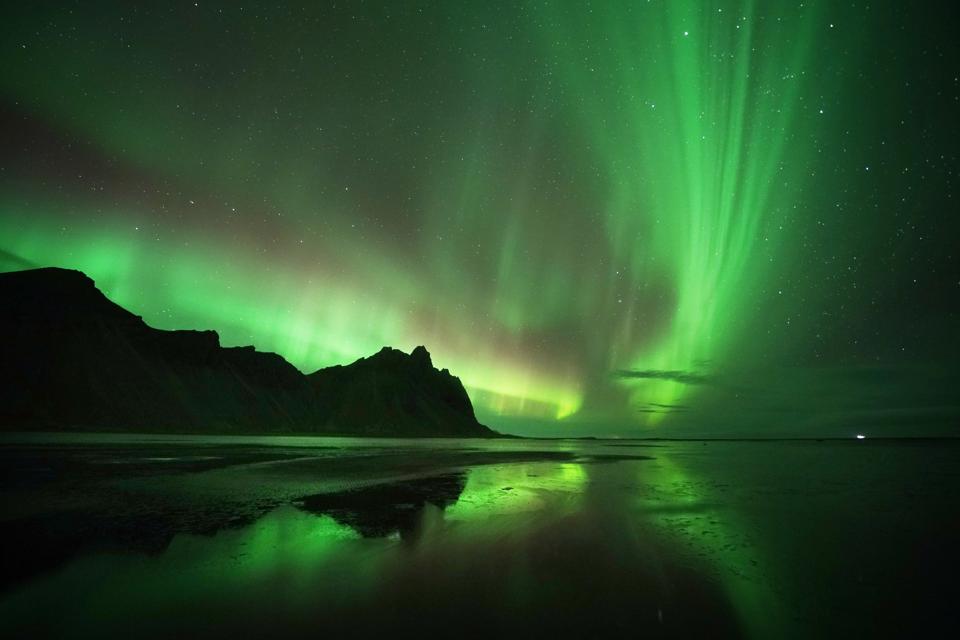 Aurora Borealis, the Northern Lights, over the Vestrahorn mountain in the east of Iceland. (Photo by … [+] Owen Humphreys/PA Images via Getty Images)

How does the solar cycle affect Earth?

While there’s some evidence that the solar cycle affects Earth’s weather and climate, the status of the Sun has the most obvious effect on the intensity and frequency of aurora. The more charged-up the solar wind headed towards Earth, the brighter and more frequent are the displays of Northern Lights and Southern Lights. What’s known as the ‘auroral oval’ gets larger, too, so people who live in areas that normally don’t experience aurora—such as the USA and Western Europe—sometimes get to see them.

Either way, a solar maximum is historically when aurora are at their most frequent and spectacular.

MORE FROM FORBESHow To See A Bright ‘Parade Of Planets’ From Your Home: What You Can See In The Night Sky This WeekBy Jamie Carter

What is ‘solar minimum’?

Just as solar maximum sees many sunspots, the trough of solar minimum features zero sunspots—and that’s what’s going on now. However, it’s been continuing rather longer than expected, which means the Sun is in the midst of a particularly deep solar minimum. The most infamous happened between 1645 to 1715 when a “Maunder Minimum” saw a prolonged sunspot minimum when sunspots were very rare for an extended period.

The current record-breaking solar minimum is part of a longer pattern of wax and wane; in fact, it’s believed that the Sun may have been in a magnetic lull for the last 9,000 years at least.

When is the next ‘solar maximum?’

It’s thought that the Sun will reach solar maximum in the mid-2020s, though exactly when sunspot frequency will peak is anyone’s guess. It’s something that can usually only be described in retrospect. The last solar maximum was in 2013/2014, but was was ranked among the weakest on record.

Once way to gauge what’s going on visually is by counting sunspots—and the other is by looking at the Sun’s mighty corona during a total solar eclipse.

Luckily, there’s one coming up in North America right on cue.

MORE FROM FORBES50 Million People May Gather For The ‘Greater American Eclipse,’ The Most Watched Event EverBy Jamie Carter

During a total solar eclipse it’s possible to see clear, naked eye evidence of where the Sun is in its cycle. Totality—when the Moon completely blocks the Sun’s bright disk—affords a brief view of the Sun’s corona, its hot outer atmosphere. During solar minimum the corona is relatively small and tightly bound to the surface. During solar maximum, the Sun’s corona is typically flared and stretching away into space.

Totality is shown during the solar eclipse at Palm Cove in Australia’s Tropical North Queensland on … [+] November 14, 2012. Eclipse-hunters have flocked to Queensland’s tropical northeast to watch the region’s first total solar eclipse in 1,300 years on November 14, which occurred as the moon passed between the earth and the sun, casting a shadow path on the globe and lasting for a maximum on the Australian mainland of 2 minutes and 5 seconds. AFP PHOTO / Greg WOOD (Photo credit should read GREG WOOD/AFP via Getty Images)

How to see explosions on the Sun

When the Sun is at solar maximum the likelihood is increased of seeing prominences—huge solar flares and coronal mass ejections in action—around the limb of the Moon during a total solar eclipse. 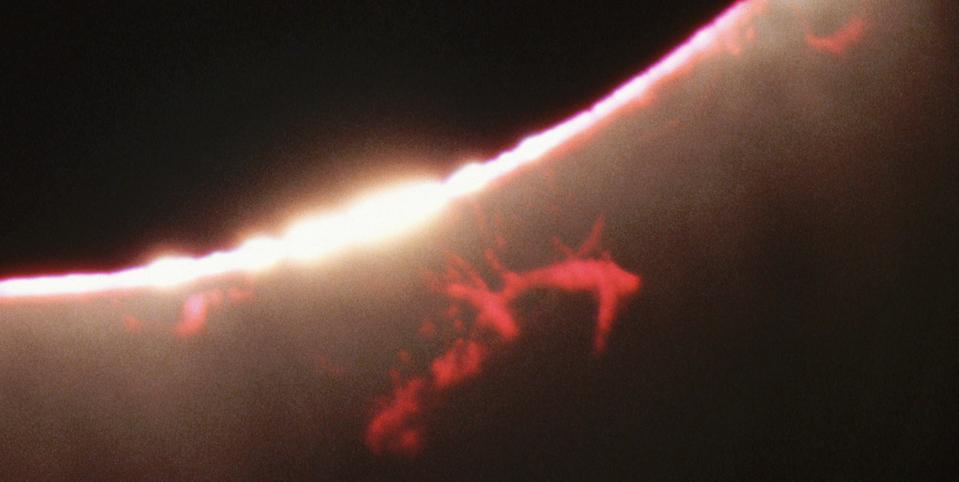 Here’s an image (above) of some pink prominences that can be seen with the naked eye only during a total solar eclipse.

Why is this good news for North American eclipse-chasers?

All of this is well-timed for the next total solar eclipse in North America on April 8, 2024, since the Sun will, by then, be approaching solar maximum.

The 100-mile wide path of totality will, during the 139 minutes it’s over land, afford a stunning view (if skies are clear) of a flared and stretched corona from anyone within under the Moon’s shadow in:

MORE FROM FORBESThree Eclipses, Two Meteor Showers And A Supermoon: A Stargazer’s Guide To Looking Up In LockdownBy Jamie Carter