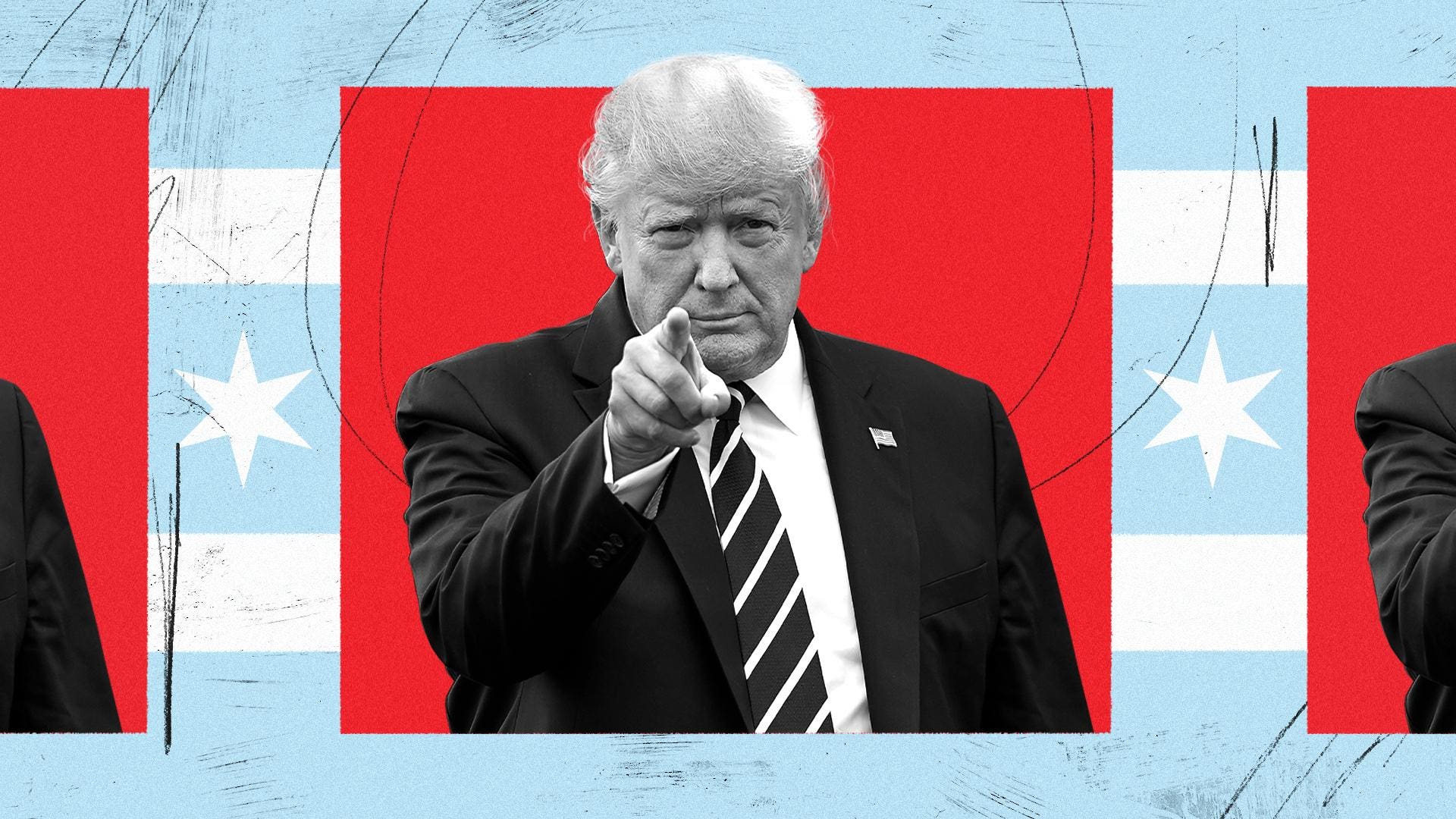 What is the president hiding in Chicago?

As Americans vote today, they do so with a limited view of Donald Trump’s finances—especially at one project, the Trump International Hotel & Tower in Chicago, which offers the prospect of shedding light on many questions: who the president owes money to, whether he’s beholden to unknown foreign entities and how he manages his taxes.

The New York Times devoted thousands of words to the Chicago property last week, revealing some eyebrow-raising tax maneuvers. But key questions went unanswered. Both the Wall Street Journal and the Washington Post have also dispatched crack investigative units to dig into the property, but they’ve come away scratching their heads.

The clearest indication that something strange is going on in Chicago comes from the president himself. On September 21, 2015, Donald Trump picked up the phone and called the editor of Forbes magazine, who had just spent several hours with him, listening to the Republican frontrunner pump up (and lie about) the value of his assets in an attempt to climb higher on the annual Forbes 400 list of America’s richest people. 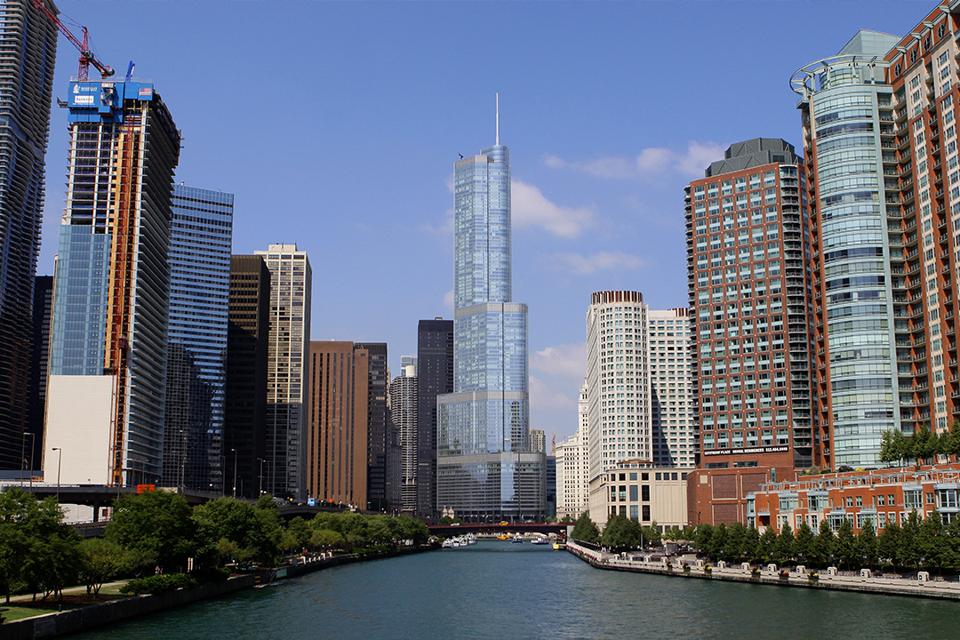 At 92 stories, the Trump International Hotel & Tower in Chicago is the tallest structure Donald Trump has ever built.

What could be so urgent to take more time away from the campaign that would ultimately catapult Trump to the White House? The Chicago project, which is the largest tower he ever constructed and one of the ten tallest buildings in the country. Rather than boost its value, though, Trump seemed intent on making it disappear. “If you want to mark it at zero, that’s okay,” he said, multiple times.

Trump, who is known not to use email, followed up by faxing a handwritten, all-caps note scrawled in black marker. Between a couple of Trumpian boasts—suggesting Forbes was undervaluing his brand by billions and noting Trump Tower’s “GREAT LOCATION”—the future president reiterated: “CHICAGO CAN BE $0—(ZERO).”

Why would Trump, someone obsessed with appearing richer than he really is, push one of his marquee assets to carry a public valuation of $0? And why would a man, in the throes of a historic presidential campaign, be so concentrated on a single asset—his tower in Chicago—if it was just one of dozens that he owned?

His actions are clues in a mystery. After all we’ve learned about Trump’s finances—from years of investigative reporting, an avalanche of tell-all books and a trove of tax-return data, the president’s biggest secret seems to be hidden near Lake Michigan.

Fifteen years ago, a blue-glass needle began climbing 92 stories into the sky, offering condos with hardwood finishes and views that extend forever. The building officially opened in 2009, at the low point of the Great Recession. Trump defaulted on a $640 million loan, according to his lender. Rather than back down, he sued his creditors, seeking $3 billion in damages. He claimed his lender Deutsche Bank helped “set fire” to the economy, which he called the equivalent of “having torched the building.” 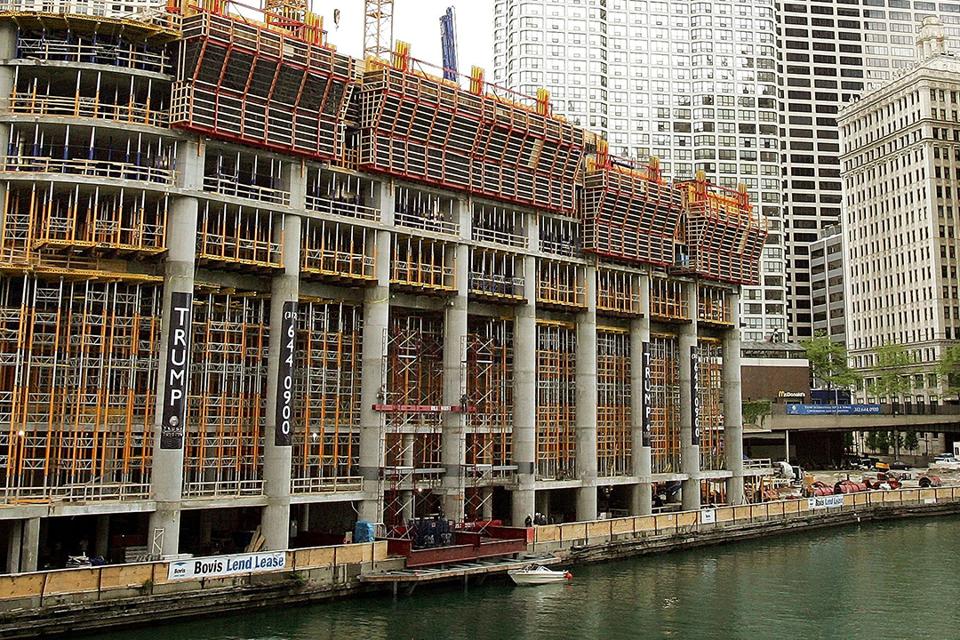 Construction continued on the Trump International Hotel & Tower in May 2006. The project officially opened three years later, in the teeth of the Great Recession.

Deutsche Bank countersued, demanding $40 million that it said Trump had personally guaranteed against the project. Four years later, in a bizarre turn of events, Trump secured $99 million of new debt from an unlikely source—Deutsche Bank. According to the New York Times, the fresh financing came from a different arm of the bank, but it helped pay back the original Deutsche Bank debt.

Fortress Investment Group also had a loan against the project, a $130 million note that was junior to the Deutsche Bank financing—and therefore more vulnerable. Court filings suggest that interest and fees accrued on the loan, bringing the amount outstanding to roughly $150 million by March 2012. It was then that Fortress, facing a dicey situation with a troubled property, allowed Trump to buy back the debt for just $48 million—apparently reducing the tycoon’s liabilities by more than $100 million.

The big mystery at the Trump tower in Chicago centers around the current loans outstanding against the building. In 2015, Trump filed his first financial disclosure report as candidate for president of the United States. In the liabilities section, he listed two loans against the Chicago tower. One of them was a $45 million debt to Deutsche Bank. The value of the other was harder to discern—the document lists it as “over $50 million,” without getting more specific.

Here’s where things get really complicated. The creditor on the second loan was a company called Chicago Unit Acquisition LLC. Elsewhere in the disclosure report, Trump noted that he owned Chicago Unit Acquisition LLC. So in other words, one of his companies was apparently lending money to another one of his companies. Since the value of the debt was listed at over $50 million, it would make sense if Chicago Unit Acquisition LLC, the creditor on the liability, was in turn worth more than $50 million. But instead, Trump listed the value of the asset at just $1,001 to $15,000. Every year since, the president has recorded the value on his financial disclosures as nothing at all. “There should be an offsetting entry somewhere,” said Harvard real estate professor Richard Peiser. “I can’t explain that.”

Trump offered a partial explanation in a 2016 interview with the New York Times. “Mr. Trump said he bought this particular loan back from a group of banks several years ago,” the newspaper wrote. “Instead of retiring it, he decided to keep it outstanding, and he pays interest on it to himself.”

But financial disclosure reports show no income for Chicago Unit Acquisition LLC, suggesting Trump does not actually pay interest on the loan to himself. And in the same interview with the New York Times, Trump offered a perplexing explanation of why he lists no value for the LLC. “We don’t assess any value to it because we don’t care,” he said. “I have the mortgage. That is all there is. Very simple. I am the bank.”

If Trump were like other banks, however, he would theoretically list the loan as an asset. There are other inconsistencies. Documents filed in the United Kingdom last year show that Trump also loaned about $200 million to two of his overseas golf resorts, but those debts—unlike the Chicago loan—have never showed up on Trump’s financial disclosure reports. Determined to unravel the riddle, Forbes spent months digging into all of this in 2018, reaching out to more than 200 people and interviewing over 50. Ultimately, none of them could provide a definitive answer. 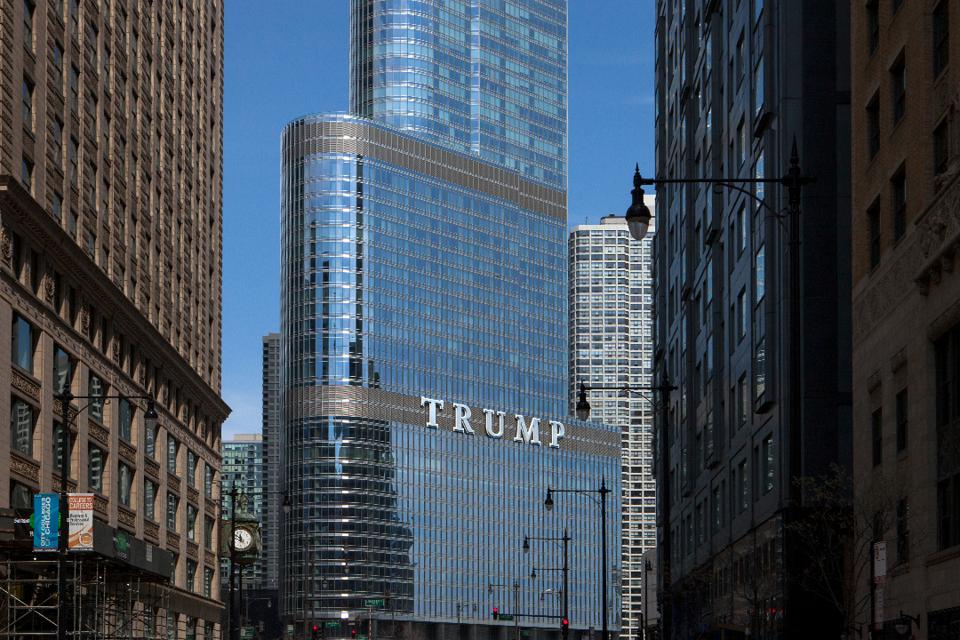 In typical Trump fashion, the real estate developer adorned his Chicago tower with impossible-to-miss letters spelling out his last name.

Lots of the sources offered up theories, though. One suggestion was that someone could have simply made a mistake on the documents. That doesn’t seem all that likely, though, given that the filings include the same inconsistencies year after year. A more intriguing hypothesis: Chicago Unit Acquisition LLC could owe money to a secret third party, which might cancel out the value of the debt it holds from Trump, making the net value zero. New York accountant Mark Feldstein noted one possible advantage of structuring a loan this way: “It would be a way to disguise who he is borrowing from.”

All of this provides fertile ground for conspiracy theorists. Setting aside the possibility of money from nefarious sources, even a traditional lender could cause complications for the president. A review of past financiers at the building is enough to send shivers down the spines of both Democrats and Republicans. Entities tied to liberal tycoon George Soros, Treasury Secretary Steven Mnuchin and pro-gun businessman Stephen Feinberg all helped finance the tower in Chicago at one point or another.

The New York State attorney general seemed to be pursuing that idea as part of its investigation into the Trump Organization’s finances. The office tried to figure out whether the Trump Organization had recognized the debt forgiven by Fortress as taxable income, addressing the president’s business about all of this in April. According to prosecutors, the Trump Organization claimed its chief financial officer, Allen Weisselberg, would answer questions about it during testimony. But when Weisselberg spoke to investigators, he wouldn’t confirm much at all, the attorney general’s office later said in a court filing.

Last week, the New York Times, which has access to Trump’s tax-return data, said that the president did in fact document $287 million of income from canceled debts in Chicago. Trump ended up paying taxes on very little of it though, according to the newspaper, because he used losses from other parts of his business to wipe out the income. Nonetheless, the revelation that he declared income from forgiven debt in Chicago casts doubt over the idea that Chicago Unit Acquisition is a vehicle to hide liabilities from tax authorities.

What remains is a swirl of unanswered questions. Did Trump account for all the forgiven debt properly? Is Chicago Unit Acquisition LLC in fact just a way of hiding a secretive lender? What else might explain the riddle? And why are Trump and his representatives acting so strangely about all of this?

It seems clear the president is hiding something. On annual net worth statements that the Trump Organization puts together for the president, the Chicago property has not appeared since 2009, according to the New York attorney general. Patrick Birney, who works in the finance department at the Trump Organization, has suggested that the debt against the Chicago building is only $45 million, completely ignoring the Chicago Unit Acquisition LLC loan.

And in 2017, Forbes asked a Trump Organization executive about the mysterious lender. The executive initially deflected questions until finally claiming—in perfectly clear English—that his phone connection was breaking up.

—With additional reporting by Randall Lane and Chase Peterson-Withorn