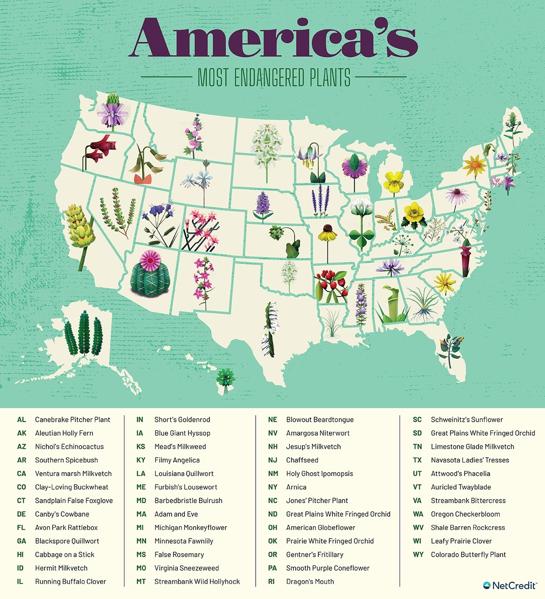 This map, which features some of the many overlooked endangered plant species found only in the United States, reminds us that plants are endangered too 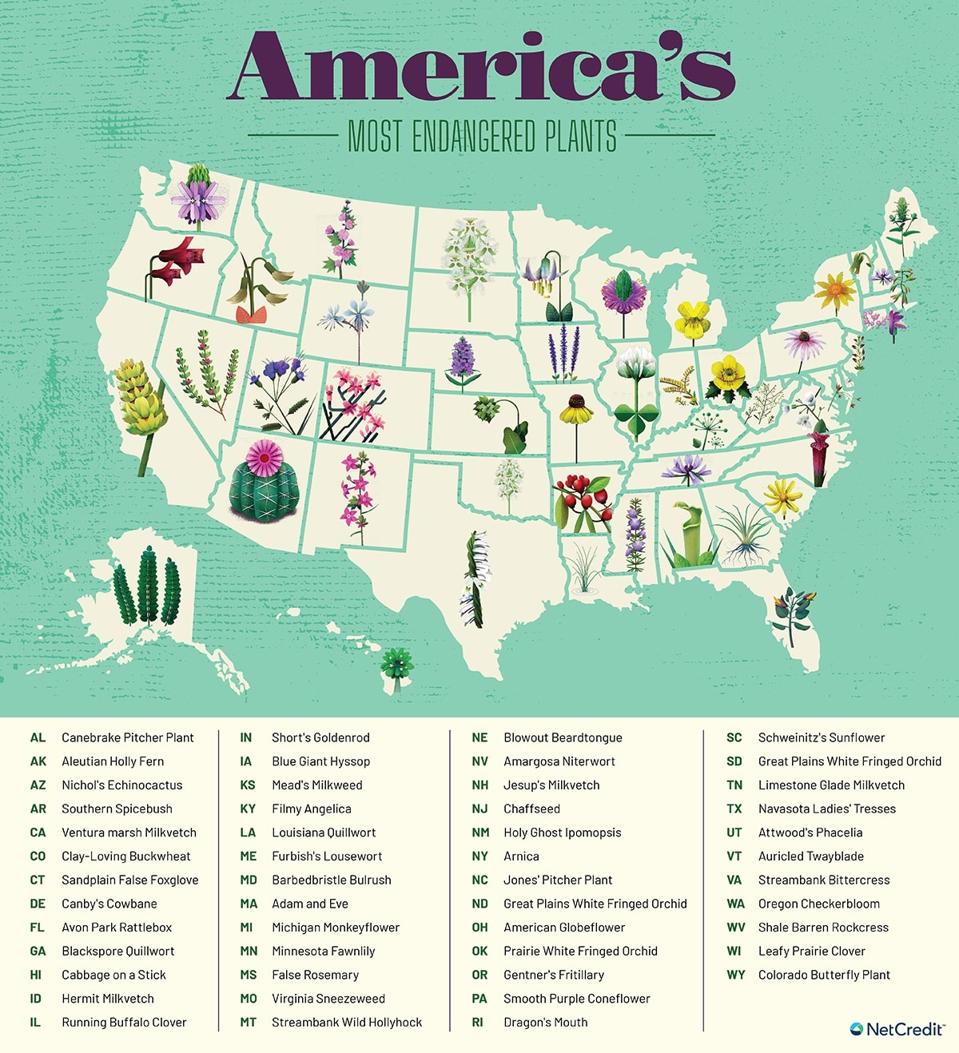 A map of the most endangered plant in every US state. This map was created using the USDA’s database … [+] of threatened and endangered plants. Selected plants are endangered at the federal level, unique-looking, have some interesting history or story and/or were not widely dispersed. If federally endangered plants were not available, the same criteria were used to pick plants that were endangered on the state level. When those were not available, selections were the best option of a threatened plant, first on the federal level, then, if necessary, on the state level. A unique plant was selected for each state. (credit: NetCredit)

I recently shared a series of posters featuring endangered animals in the United States to celebrate National Wildlife Day (more here), but some of you wondered where are the endangered plants? So I thought I’d share this map featuring some of the most endangered plants in each US state, and to remind you of the variety of plant life we stand to lose, too.

Why should we protect endangered plants?

Further, when ecosystems fail, human health is at stake too. A well-balanced and functioning ecosystem cleans the air we breathe, the water we drink and that our crops need to grow. Additionally, some endangered plants have healing properties that serve as foundations for our medicines. Several examples of endangered medicinal plants that are native to the United States include Hawaiian sandalwood, American ginseng, wild yam, and rosy periwinkle.

Although often overlooked, plants are essential partners in maintaining functional ecosystems in the United States. According to The Center for Biological Diversity, nearly all of these endangered plants are threatened because of human actions: climate change, droughts, wildfire, agriculture, invasive species, avaricious American legislators, rampant human expansionism and habitat destruction. To save them, corporations and individuals must work together to ensure that state and federal governments continue to conserve our native plants for future generations to enjoy and to benefit from.

The Endangered Species Act (ESA), enacted in 1973, has been credited with conserving the habitats upon which endangered species depend, stabilizing populations of species at risk, and saving hundreds of species from extinction, including the California condor, grizzly bear, whooping crane, Okaloosa darter (that’s a fish) and black-footed ferret. But few people know that the ESA also protects endangered plants, such as California’s iconic sequoias. Thus, the ESA is an important legislative tool that, ironically, also needs protecting if North American ecosystems are going to survive the Sixth Mass Extinction Event already in progress.

A handful of conservationists have been hard at work changing the story for a tiny fraction of plant populations facing extinction (for example, here). But in the US, hundreds of plant species are still facing a losing battle for survival. To avoid this tragedy, we all must work to rectify this by making basic changes in our personal lives. For example, reduce the amount of water we use, stop using herbicides, pesticides and other poisons and dispose of them properly so they don’t harm native plants, their pollinators and their seed dispersers, be careful with campfires, cigarettes and other flaming materials and only hike on visitor trails in national and state parks, and plant native plants on our property.

Barbara Davidson (2020). An Illustrated Tribute to the Most Endangered Plant in Every U.S. State (link).

News DSMW - June 17, 2021
0
Some objected to the phrase “Independence Day” in the formal name of the holiday celebrating the end of slavery. Others said federal workers did not need another paid day off. ...
MORE STORIES