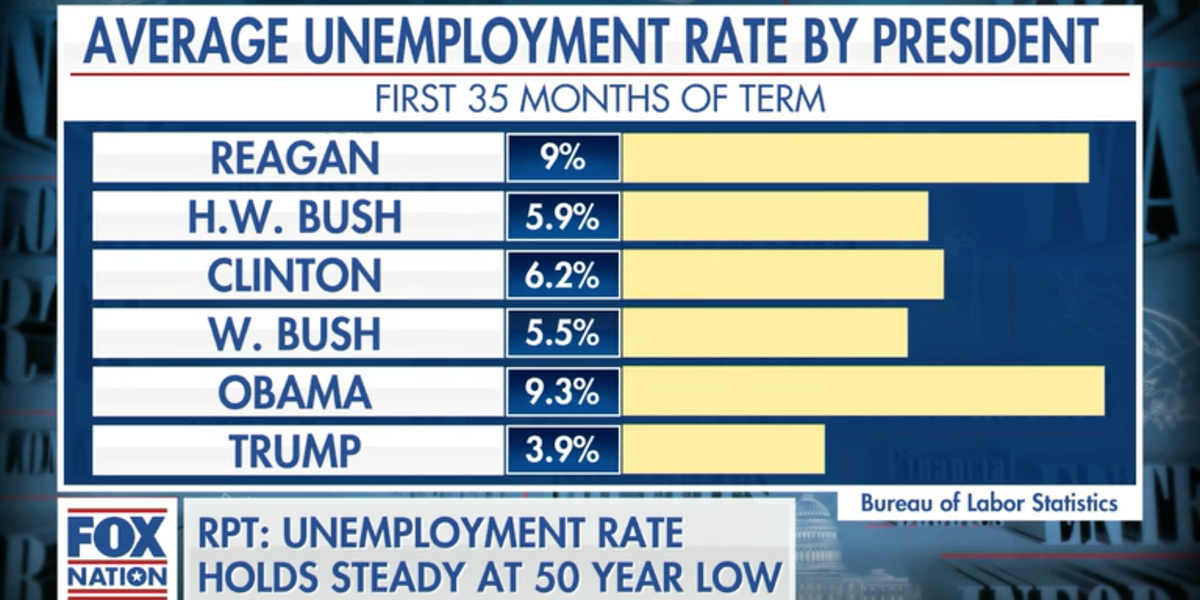 In a segment on Fox Nation’s “Deep Dive” on Thursday, Bolton said Trump’s campaign should be “plastering absolutely everywhere” a chart showing the average unemployment rate during his first term in office compared to the last five presidents.

Three years into Trump’s presidency, and the unemployment rate stands at 3.9 percent, the lowest in 50 years. In second place is President George W. Bush during his first term, showing unemployment at 5.5 percent. Former Pesident Barack Obama fared worst with unemployment at 9.3 percent.

According to the “Deep Dive” panel, the nation’s low unemployment rate, combined with the fact that American workers’ wages are up, bolsters the president’s 2020 prospects and presents a serious problem to Trump’s Democratic challengers.

As TheBlaze reported on Sunday, Goldman Sachs surveyed more than 150 clients and found that almost nine out of 10 of them (87 percent) believe Trump will win re-election in November.

Investors are bullish on Trump’s chances because of the economy. As writer Chris Enloe noted, during Trump’s presidency, the stock market has broken records, unemployment has fallen to near all-time lows, and wages are rising, especially among the lowest paid workers.

Moreover, only 5 percent of investors told Goldman Sachs they anticipate an economic recession this year.

Voters are feeling it, too

In a CNN poll conducted in December, 76 percent of respondents described the economy as very or somewhat good. This was a nine-point improvement from the previous year and the highest number since 2001.

A breakdown of the study across party lines showed that Republicans’ views on the economy were nearly unanimous with 97 percent saying economics conditions are good right now, a view shared by 75% of independents and 62% of Democrats.

Meanwhile, a CNBC survey published last month showed the president’s ratings on his management of the economy was up 7 points since September.